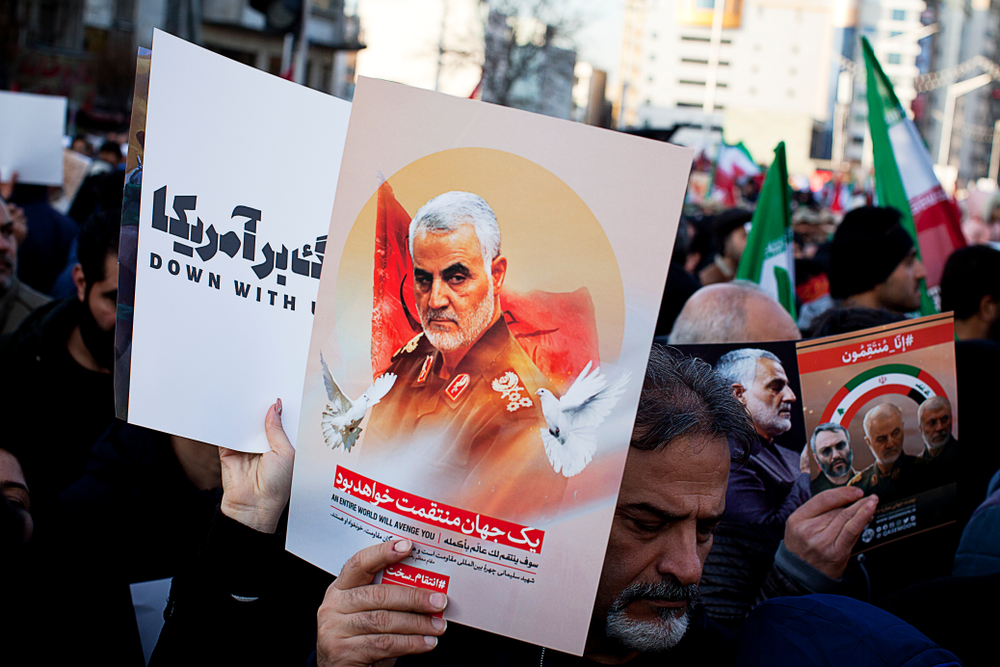 While at first glance, the targeted killing of Iranian top general Qasem Soleimani looks like a negative to Russia and its interests in the Middle East, due to its close relationship with Iran, looking further, it appears that this is the perfect opportunity for the superpower to expand its role and authority in the region.

This evaluation comes after assessing the positions of the US and Iran, where Trump wants to show he ended our involvement in the “endless wars” and did not launch a new one. Khamenei does not want a shooting war with the United States, and the domestic fervour he is seeking to exploit the killing of Soleimani won’t alter the grim economic reality in Iran. Hence, rather than an escalation, which a previous article explained would be detrimental to Russian interests, Russia has the opportunity to become an intermediary between Trump and Khamenei. Putin can take advantage of his favourable relationship with Trump, and both sides’ disinterest in war, to mediate, and hence set out a scene ready to promote its own interests.

Russia certainly appears to be going in this direction, attempting to consolidate and increase its power in the Middle East, as pro-Kremlin political analyst Sergei Markov said “I can see Russia deploying military experts now both to Iran and to Iraq,” adding “Russia’s general strategy is to continue strengthening its uniquely strong alliances in the region with Iran, Israel, Turkey, Syria, Libya, Saudi Arabia and Qatar,”

It is now clear that Russia has seen the positive aspect of Soleimani’s killing on their possibilities for strengthening their geopolitical position in the Middle East and are already evaluating methods to take advantage of the situation.

Putin taking advantage of the situation

Putin has been swift to take advantage of the uneasy situation in the middle east and has moved on several fronts. “Putin sees pushing back against U.S. unilateralism as a personal mission and he is extremely opportunistic. He will, therefore, seek to capitalize on every opportunity he can to use the assassination of Suleimani and any ensuing instability to tarnish Washington’s reputation in the region,” said Andrea Kendall-Taylor, a senior fellow at the Center for a New American Security think tank who previously served as deputy national intelligence officer for Russia and Eurasia at the National Intelligence Council.

Signifying this swiftness, on Tuesday Russian leader Vladimir Putin flew to Russian military bases in Syria to discuss “the fight against terrorism” with Assad. Putin speaks with authoritarian leaders in the Middle East and Western Asia from a position of money and power, just as Trump does, but unlike Trump, Putin manages to build alliances in the region.

Earlier last week Putin visited Istanbul, where he opened a $7,8 billion pipeline, TurkStream. When German Chancellor Angela Merkel went to Moscow to discuss the crisis over the Soleimani assassination her government’s spokesperson says Russia is “indispensable” when it comes to solving political conflicts.

Russia has another card up its sleeve should escalations develop further, that is crude oil. Probably one of the most far-reaching effects of an escalation of the U.S.-Iran conflict could be a shutdown of oil tanker traffic via the Strait of Hormuz by Iran. Though unlikely given the severity of the consequences such a move would push international oil markets into considerable turmoil, since approximately 21 per cent of globally consumed petroleum passes through the strait. Russia could become a crucial market stabilizer deriving significant financial, strategic, and diplomatic benefits. It is thus sensible to conclude that Russia is in a prominent position, with many possibilities open to them in the current scenario in the Middle East.

Syria the centre of Russia’s concern

Russia has been increasing its influence on middle eastern affairs ever since it entered an alliance with Bashar Al Assad in Syria. Syria has been a symbol of Russian success in the face of US-supported rebels, and Russia has successfully established a lasting influence in the nation.

The decision to intervene in Syria allows us to make several conclusions about Russian foreign policy beyond the Middle East. The most important of them is that Moscow is not afraid of making bold decisions. One may argue that the decision to intervene in Syria was too risky, but in the current age of global public scrutiny, information overload and universal political procrastination, in the fast-changing and perplexing environment of the Middle East the Kremlin made a bold choice for action.

Despite this, This year could bring challenges for Russia’s role in the Syrian conflict, despite it having been at the forefront of efforts to resolve the crisis in the past.  With the regime in Syria becoming less likely to undergo a reshuffle and Iran reaping the benefits of its wide-scale involvement, Moscow might face difficulties in promoting its vision of a political settlement, while competition with Tehran could become more evident. This is why the killing of Qasem Soleimani comes as a positive to Russia, it diverts Iran’s attention from Syria, as well as losing a major commander that will reduce Iran’s influence and stature in the nation.

It’s clear that Syria will remain the centre of Russia’s operations in the Middle East, and their main strong point, and the Killing of Suleimani enhances that position, but this does not limit Russia to Syria, as the points above have shown, Russia is developing plans to take advantage of the uncertain scene in the Middle East.