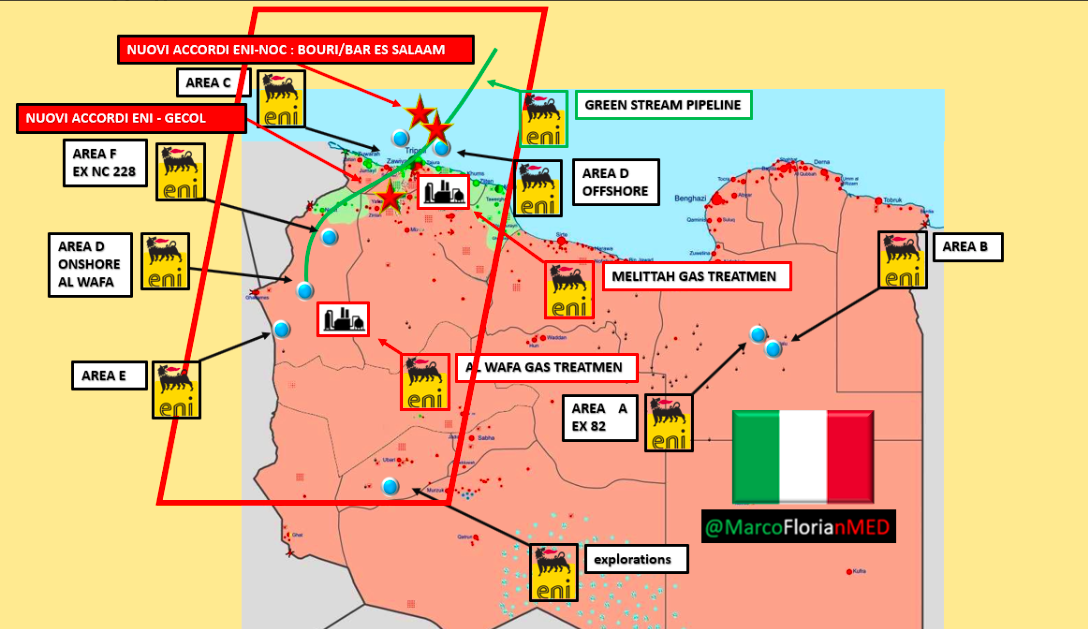 The Italian energy major Eni is the leading foreign energy operator in Libya. Although today considered a private company, the Italian government maintains de facto control over Eni with its 30.33% share. Italy’s largest company by revenue, Eni’s drive to expand its market share across the Middle East and North Africa has shaped the parameters of Italy’s foreign policy orientation. In Libya almost all of Eni’s oil and natural gas assets are located in the western half of the country, under the control of the Turkish-backed GNA.

The geography of Eni’s oil and natural gas assets gives Italy a vital national interest in the preservation of the GNA and the expansion of its authority over western Libya in order to ensure the security of Eni’s energy infrastructure.

Eni is the operator of, and 50% shareholder in, the Western Libya Gas Project that includes the onshore Wafa field on the Libyan-Algerian border, the Bahr Essalam and Bouri offshore fields, the Mellitah complex of treatment plants and pumping stations, and the Greenstream pipeline that transports gas from the Mellitah complex to Sicily. Italy is the only market destination for Libya’s natural gas exports. In 2019 the Western Libya Gas Project supplied 5.4 billion cubic metres of natural gas to Italy, equivalent to 8% of Italy’s natural gas demand.

The good relationship between Italy and the GNA has enabled Eni to maintain stable energy production in the areas under the protection of the militias aligned with the Tripoli government. Since the GNA’s formation under the leadership of Presidency Council head Fayez al-Sarraj, Eni’s exports of Libyan natural gas to Italy have remained relatively constant at around 5.6 bcm annually via the Greenstream pipeline. Neither the pipeline, the Wafa onshore gasfield nor the Mellitah processing and pumping complex on the Libyan coast have experienced significant levels of disruption over the past five years.

Eni does wield leverage over the GNA on security matters through the provision of power production capacity, as the GNA’s own stability depends on its ability to provide a reliable supply of electricity and electricity-powered municipal services to the residents under its authority. Across both halves of Libya, there is currently an unprecedented power crisis that is generating civil unrest. While affecting both sides in war-torn Libya, Tripoli, the seat of the GNA, is the most affected region because of the density of its peak electricity demand. In Tripoli outages can last almost 48 hours.

On 11 July 2020 Prime Minister Sarraj, NOC Chairman Mustafa Sanalla and Eni’s CEO hammered out an MOU for Eni’s provision of key parts and technical assistance to the General Electric Company of Libya (GECOL) for the latter to maintain the operation power facilities that provide 3 GW installed capacity accounting for 52% of the country’s total available installed power generation capacity and around 70% of its currently functioning capacity. Additionally, Eni is conducting a development study for the construction of a new gas-fired plant and is providing support for start-up projects to generate power from renewable energy resources.

Italy increasing its intervention in Libya

In recent months, as Turkey keeps on expanding its military influence in Libya, Italy is also stepping up its efforts.

The GNA, signed on Friday a military agreement with Italy covering many areas including training, military education and cooperation in the field of illegal immigration. Defense Minister Salah Al-Din Al-Namroush inked the deal with his Italian counterpart Lorenzo Guerini in Rome, according to media office of the Volcano of Rage Operation.

The two sides also agreed to cooperate in mine clearance, land and sea border security, ammunition and mines disposal, relief operations in cases of natural disasters, health emergencies, and other issues.

“This comes as part of the ministry’s efforts to enhance capacity and to expand our coalition, which we started with Turkey and Qatar, to include all brotherly and friendly countries that stood with the Libyan people during their plight,” Al-Namroush was quoted as saying.

It is therefore clear that the GNA is directing Italy towards the route of cooperating with Turkey and Qatar in the country. However, Italy’s ambitions could make them see the latter as an obstacle as a pose to partners as will be further explained in the next section.

Italy has in the past years been supporting the GNA government in Libya, along with Turkey. This has led to a strengthening of ties between Italy and Turkey in economic and geopolitical turns, but many argue, that now this could turn into a rivalry due to a conflict of interests, which will be discussed later.

However, Italy’s imperative to secure Eni’s considerable assets has left Rome deeply ambivalent over Turkey’s deepening military presence in the country. While providing important short-term benefits, Rome will need to assess the extent to which Libya’s growing dependence on Turkey will render Italy vulnerable to Ankara’s dictates.

Within the same time frame as Eni’s negotiations with the GNA, Turkey’s Karadeniz Holding made a bid to send its power-ships to the western Libyan coast to provide the GNA with up to 1 GW of floating power generation capacity. Karadeniz Holding’s proposal came after the heads of various Turkish ministries visited Tripoli to discuss with the GNA government the developing Turkish involvement in Libya’s energy, construction and banking sectors. Turkey’s power plan is reflective of Ankara’s wider push to expand its economic involvement in Libya, a move that potentially threatens Italy’s position in the country’s economy.

The competition to reconstruct western Libya’s economy and infrastructure will intensify as the GNA consolidates its control. With Turkey being the GNA’s main security provider, Italy now faces the growing concern that cash-strapped Ankara will leverage its built-in advantage with Tripoli to receive reconstruction contracts at Italy’s expense. Ankara’s advantage is multiplied by the financial ability of Turkey’s close strategic partner Qatar to invest heavily in Turkish reconstruction projects in Libya.

Italy has gone under the radar and quietly established a very influential role in Libya due to Eni’s energy and economic control. However, although Italy’s influence in Libya is underestimated and overlooked by many, it cannot be said definitively that it is larger than that of Turkey, who are rapidly establishing their economic and military presence in the nation, with Qatar’s support, much to Italy’s dismay. We could see the beginning of a great geopolitical game between Turkey and Italy in Libya.