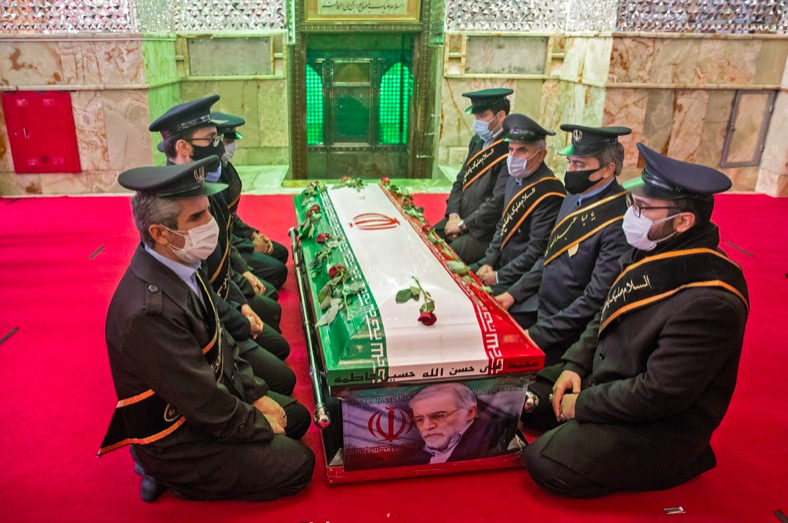 Iran said, this week, it will soon put on trial what it said were three Mossad-linked agents arrested in April amid simmering tensions between the Islamic Republic and arch-foe, Israel, which has been waging a shadow war in the Middle East for years.

A prosecutor said the three detained men were planning to assassinate nuclear scientists.

Iran has long accused Israel, which the Islamic Republic refuses to recognise, of sabotaging nuclear sites and killing scientists to disrupt its nuclear programme.

Top Iranian nuclear scientist, Mohsen Fakhrizadeh, was killed in an ambush near Tehran in November of 2020. A senior Revolutionary Guards commander said the killing was carried out remotely with artificial intelligence and a machine gun equipped with a “satellite-controlled smart system.”

Shortly after his death, Iran pointed the finger at Israel, with the Foreign Minister alleging “serious indications of (an) Israeli role”.

Israel neither confirmed nor denied responsibility.

Fakhrizadeh had been described by Western and Israeli intelligence services for years as the mysterious leader of a covert atomic bomb programme halted in 2003, which Israel and the United States accuse Tehran of trying to restore. Iran says its nuclear programme is solely for civil uses.

Ahmadi-Roshan, a 32-year-old chemical engineering graduate, was killed by a bomb placed on his car by a motorcyclist in Tehran in January 2012. Another passenger died in hospital and a pedestrian was injured.

Iran said the victim supervised a department at the country’s underground Natanz Uranium Enrichment Facility. Iran blamed Israel and the United States for the attack.

Several other assassinations of Iranian officials linked to the program have been attributed to Israel in the past 2 years. More recently, Israeli defense Minister Benny Gantz on Thursday ordered his ministry’s security department to conduct an investigation into recent media leaks that harmed Israel’s “ambiguity policy,” shortly after Hebrew-language television strongly hinted that a Military Intelligence unit was responsible for a cyberattack in Iran. One of Iran’s major steel companies said Monday it was forced to halt production after being hit by a cyberattack that also targeted two other plants, apparently marking one of the biggest such assaults on the country’s strategic industrial sector in recent memory.

Israeli Channel 12 news, Channel 13 news, and the Kan public broadcaster reported that Israel Defense Forces chief of staff Aviv Kohavi recently visited the 8200 intelligence unit’s headquarters and was presented with a video from the aftermath of Monday’s cyberattack that forced the Iranian state-owned Khuzestan Steel Co. to halt production.

During his visit to 8200, Kohavi “likely” thanked the unit for “a series of incidents” attributed to Israel, Channel 12’s military correspondent Nir Dvori said.

In a tweet after the reported cyberattack, Channel 13’s Or Heller said that “there were a lot of red eyes” at 8200 headquarters.

Slightly breaking from tradition, now-former prime minister Naftali Bennett repeatedly spoke of what he called the “octopus doctrine” of striking Iran directly rather than its “tentacles,” amid numerous reports of assassinations of senior Iranian officials in Iran. Bennett, however, did not directly confirm any specific incident.

Gantz ordered the Director of Security of the Defense Establishment, an internal Defense Ministry investigatory unit known in Hebrew as Malmab, to probe “recent leaks from closed discussions… as well as leaks from operational events, in a manner that violates the ambiguity policy of Israel,” his office said in a statement.

In retaliation to the recent assassinations attributed to Israel, it appears Iran has attempted to launch its own retaliation on agents of the Israeli Mossad.

According to a report by the daily on June 30, the Iranian hitmen, at first, were going to eye an attack on a former Israeli consulate Yosef L.S. and his wife. The group was then going to attack a group of Israeli tourists in [the district of] Beyoğlu.

The five hitmen were planning successive damage to Israel on two different occasions, the daily hinted.

It was stated that members of the intelligence service were undercover as students and the Revolutionary Guards as businesspeople and tourists for the attack which was caught in the planning stage.

Five suspects were transferred to court on June 29 after interrogations that lasted a fortnight and four of them were arrested on charges of “political and military espionage.”

The other was freed by judicial control decision. Israel’s Foreign Minister Yair Lapid had urged citizens in Türkiye to leave “as soon as possible” over threats that Iranian operatives are actively planning to kill or abduct Israelis in Istanbul.

The frequency and success of reported Israeli assassinations of Iranian key figures, and the failure of Iran’s retaliation attempts have raised some eyebrows domestically and questions on the effectiveness of Iran’s previously infamous intelligence agency.

This has not been taken lightly by the Iranian leadership and revolutionary guard. Iran appointed a new commander to head the powerful intelligence service of its Islamic Revolutionary Guard Corps (IRGC) with no reason given as to why the previous chief left the job.

Ramezan Sharif, spokesman of the elite force, announced in a statement on Thursday that Hossein Taeb was replaced by Mohammad Kazemi, who previously headed the Intelligence Protection Organisation, the counterintelligence arm of the IRGC.

The 59-year-old Taeb, who was previously a senior figure in the Iranian intelligence ministry, switched to the IRGC in the late 2000s, and was appointed as the head of the paramilitary Basij organisation in 2008.

One year later, the intelligence unit of the IRGC was formed and Taeb took its helm, a position he held until his replacement was announced.

Sacking Taeb,  a confidant of the regime’s Supreme Leader Ali Khamenei and his son Mojtaba reveals the depths of what Khamenei describes as the “crisis of infiltration” in the regime’s security apparatus.

Since its foundation in 2009, the IRGC-IO has been under Khamenei’s direct supervision, operating as a parallel security organization to the regime’s Ministry of Intelligence and Security (MOIS). According to the regime’s constitution, a mullah should be the Minister of intelligence. Thus, Khamenei appointed Taeb as the IRGC-IO chief. But he was forced to dismiss him despite the fact that he controlled a vast intelligence apparatus.

hen the vast scope of assassinations by the regime’s foreign adversaries and the operations by the Iranian Resistance mounted, Khamenei recognized the faltering state of the IRGC-IO. To end the “crisis of infiltration,” he appointed Mohammad Kazemi as the IRGC-IO new chief.

has been in charge of the IRGC’s Intelligence and Information Protection Unit since 2009. This unit acts as the IRGC’s counterintelligence organization and is responsible for identifying spies and fighting infiltration in the regime’s security apparatus. So, the organization operates in shadow. Therefore, Kazemi is not a public figure. Yet, he is very close to Khamenei and deeply trusted by him.

Kazemi had tried to prevent the leaking of confidential information outside the IRGC while in charge of the political-security surveillance of the IRGC commanders and its personnel.

According to the information obtained by the Iranian Resistance, Kazemi is considered the IRGC’s highest official. He vets all the IRGC commanders and approves all missions. Even Khamenei’s Chief of Staff, Mohammadi Golpayegani, and his closest colleague, Vahid Haghani, are not allowed to make any changes in the regime’s security apparatus without Kazemi’s consent.

Unlike Taeb, who lost his credibility after hundreds of failed operations, Kazemi is highly trusted by Khamenei and his son Mojtaba.

Therefore, Kazemi will focus on countering espionage and crushing any voice of dissent inside the IRGC. But this cannot ultimately help Khamenei because the recent developments in Iran underscore that the entire IRGC-IO is like a “beehive” filled with agents and spies of the regime’s adversaries. The recent arrest of IRGC Brigadier General Ali Nasiri, a top security official, is a testament to Khamenei’s failure to “clean up” the IRGC-IO and unify them.

Iran’s change of leader in the IRGC intelligence one the one hand shows its admittance and acceptance of the fact that it has weakened in recent years, but on the other, will not solve the deeper structural problems in the service, which has been infiltrated multiple times, and is rapidly losing credibility. Structural changes will be needed to repair the damage suffered by Iran’s sizable intelligence infrastructure. Israel, Iran’s biggest enemy has shown these weaknesses through these attacks. If Iran reacts with structural changes, these attacks could help Iran notice where the problem lies and repair it, which is why several Israeli officials have indirectly criticized these attacks and their effectiveness in recent months.