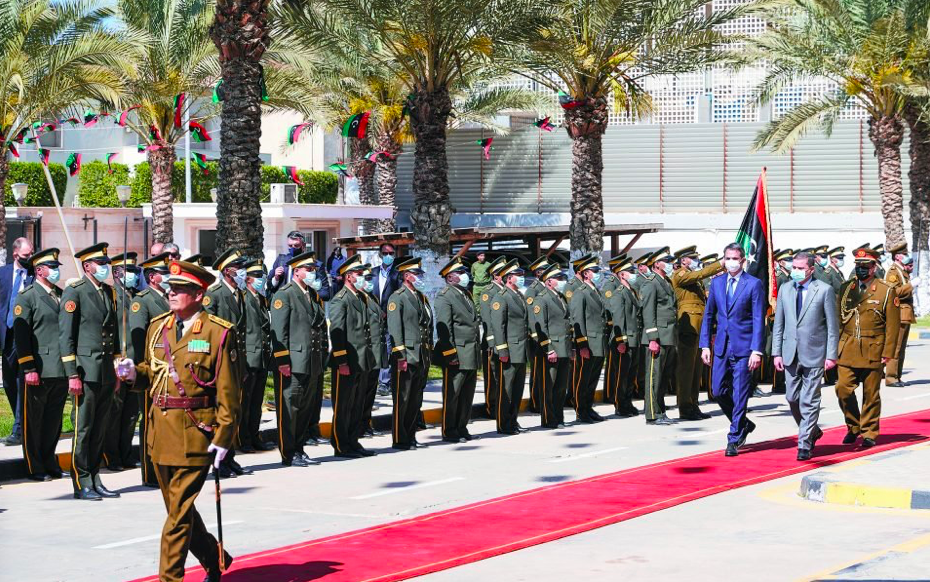 Greek Prime Minister, Kyriakos Mitsotakis confirmed that his country had restored diplomatic relations with Libya and increased its diplomatic representation.

This came during his meeting with the head of the Libyan Presidential Council, Mohammad Menfi, and the Minister of Foreign Affairs, Najla Al-Manqoush on Tuesday in Tripoli during which he announced the reopening of airspace between the two countries.

The two sides discussed aspects of bilateral cooperation between the two countries in various fields, in addition to the formation of joint committees, according to a statement by the Presidential Council.

“There will be cooperation between Libya and Greece in the economic and investment fields”, Menfi said, stressing that all agreements will be activated in all fields to serve the interests of the two peoples.

“It’s time to leave behind what has tested our relations in the past,” Mitsotakis said in televised remarks alongside Libya’s interim Prime Minister Abdulhamid Dbeibah.

Greece had ordered the expulsion of Libya’s current head of the Presidential Council, Mohammad Younes Menfi, who had served for almost a year as Libya’s ambassador in Greece, in December 2019 following a maritime agreement between Tripoli and Ankara. He remained in Greece with his family but without diplomatic status.

In November 2019, Turkey and Libya signed a maritime delimitation dealthat provided a legal framework to prevent any fait accompli by regional states. Accordingly, the attempts by the Greek government to appropriate huge parts of Libya’s continental shelf, when a political crisis hit the North African country in 2011, were averted.

Why has Greece chosen to revive ties?

The new interim government, is headed by a presidential council, and was formed with the backing of the UN. In a factor that could have certainly influenced Greece’s decision to initiate ties, in addition to the UN, the powerful backers of both the GNA and LNA have pledged their support for the new interim government, making it an authoritative, and powerful authority in Libya, with which ties would certainly benefit Greece and their regional interests.

Another reason for this decision, is the importance of Libya in Greece’s Mediterranean interests. This came to light in the meeting between Greek PM Kyriakos Mitsotakis, and the Libyan interim government. Mitsotakis, called on Libya to scrap the illegal 2019 maritime boundaries agreement with Turkey during his first visit to the country on Tuesday. Mitsotakis said in a joint press briefing with Libyan Prime Minister Abdulhamid Dbeibeh in Tripoli that for Greece “it is very important, the annulment of illegal documents.

“They were presented as supposedly transnational agreements but have no legal effect, as expressly stated by the European Council.”

Athens is fiercely opposed to the deal between Ankara and Tripoli, which claims much of the Mediterranean for energy exploration and as an Exclusive Economic Zone, conflicting with the claims by Greece, Cyprus and Egypt.

Was the visit a failure?

The Greek PM’s visit to Libya can be considered a partial failure, as Dbeibeh expressed readiness for talks with Greece on the demarcation of maritime zones and to set up joint committees for this, but clearly separating the memorandum with Turkey, noting that his government’s main priority is the interests of Libya.

Mitsotakis also noted that the issue of maritime zones will affect not only Greek-Libyan relations, but also the North African country’s relations with the European Union.

He also dropped clear hints about the Turkish presence in Libya, stressing that Greece will stand by Tripoli in the runup to the elections, “away from foreign armies and interests.” Libya does not appear to agree with this proposed cut in Turkish ties.

However, there were several positives from the meeting as well, as Mitsotakis referred to the multiple opportunities for economic cooperation between Greece and Libya and highlighted the importance of the defense bond between the two countries, recalling that “more than 280 Libyan officers have graduated in recent decades from the schools of the Hellenic Armed Forces.” He also noted that Libyan Coast Guard officials have been trained in Greece.

Meanwhile Tuesday, during a visit to Ankara discuss trade and refugees, European Council President Charles Michel urged Turkey to keep working to resolve disputes with Greece and Cyprus over gas rights in the Mediterranean.

The visit by Michel and European Commission President Ursula von der Leyen follows the EU’s statement at a summit last month that work could begin on deeper trade ties and more financial support to Turkey to deal with refugees.