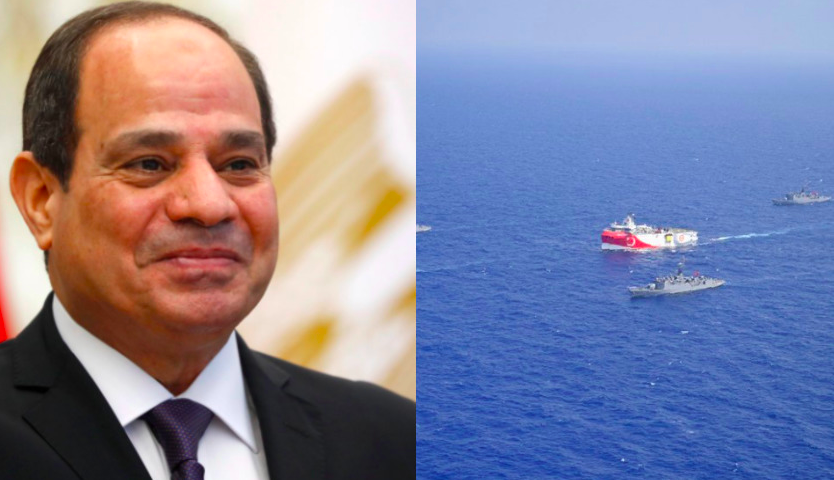 Greek media reported that Egypt’s announcement of holding a tender for hydrocarbon exploration in the Eastern Mediterranean by recognizing the exclusive economic zone (EEZ) demarcated by Turkey could be a sign of a possible agreement between Ankara and Cairo on the issue.

Greek daily Kathimerini said over the weekend that in the eastern zone of the tender map, Egypt has paid attention to the continental shelf notified by Turkey to the United Nations after the agreement between Turkey and Libya in November 2019. The newspaper said that Cairo’s move could be interpreted as its reservation to get involved in the controversy about the Turkish-Greek continental shelf in the region, especially around Cyprus.

Kathimerini also said that even though this move would not refer to an immediate reconciliation, Cairo left an open door to Ankara for future talks by implementing such a move.

The Turkey-Libya deal on maritime delimitation has provided a legal framework to prevent any fait accompli by regional states. Accordingly, the attempts by the Greek government to appropriate huge parts of Libya’s continental shelf, since a political crisis hit the North African country in 2011, have been averted.

The agreement also confirmed that Turkey and Libya are maritime neighbors. The delimitation starts from Fethiye-Marmaris-Kaş on Turkey’s southwestern coast and extends to the Derna-Tobruk-Bordia coastline of Libya.

In response, Egypt and Greece signed an agreement in August 2020, designating an EEZ in the Eastern Mediterranean between the two countries,

According to the U.N. Convention on the Law of the Sea, while a country is able to stretch its territorial waters only 12 nautical miles out to sea, when it comes to the EEZ, where it has the rights to fishing, mining and drilling, the area can extend for an additional 200 miles. However, if the maritime distance between the two countries is less than 424 miles, a bilateral deal is needed to determine a mutually agreed dividing line of their respective EEZs.

Greece, on the other hand, claims that the islands also have their EEZs, and with this claim, it reduces Turkey’s zone remarkably.

Another Greek news portal, The Indicator, said that Egypt is close to making an agreement with Turkey in the Eastern Mediterranean by disregarding Greek interests.

It said that the areas of one tender zone in Egypt’s plan have been determined by Turkey’s claims, not according to the agreement with Greece.

The relations between Turkey and Egypt deteriorated after Gen. Abdel-Fattah el-Sissi toppled the country’s first democratically elected president, Mohammed Morsi, in a coup after only a year in office.

Recently, however, signals of a possible reconciliation have come from both countries, particularly due to the changing dynamics in the Eastern Mediterranean and the Turkey-Greece crisis over the region’s energy resources.

Turkish President Recep Tayyip Erdoğan and Foreign Minister Mevlüt Çavuşoğlu have both confirmed that intelligence units on both sides have recently met.

Although there are varying estimates, most figures suggest that the Eastern Mediterranean region has over 70 trillion cubic feet of natural gas or approximately 1.5% of the total natural gas reserves in the world.

Most of this natural gas is found in the fields of Glaucus, Aphrodite and Calypso, which are licensed by the Greek Cypriot administration. Other areas with intense natural gas in the region are Israel’s Leviathan and Egypt’s Zohr.

Egypt’s recent reconciliation with Turkey could very well be a reflection of, and stimulated by the Gulf reapproachment with Qatar, and therefore Turkey, although the latter to a lesser extent.

Earlier this month, the US news agency Bloomberg carried a report entitled “Gulf Reaches Out to Erdogan in Wary Move to Ease Tensions” quoting anonymous sources in the region and indicating some kind of potential Gulf-Turkey rapprochement. Though no official confirmation or denial has been given since then, media reports in the region have carried hints that the ice is thawing between Turkey and the Gulf.

The gist of the Bloomberg report was that the “United Arab Emirates and Saudi Arabia are holding out for the possibility of better ties with Turkey that could benefit trade and security in a volatile region.”

But it also cast doubts on the possibility of the success of such moves. “The moves are tentative, given the backdrop of long-standing tensions and jostling for influence. They are also likely to fall foul of the Gulf duo’s insistence that Turkey rein in support for the Muslim Brotherhood,” the report concluded.

Last week, Emirati media highlighted the cordial exchange between a Turkish minister and an Emirati official on the Emirati Hope probe reaching Mars. Sarah bint Yousif Al-Amiri, UAE minister of state for advanced sciences, thanked Mustafa Varank, Turkey’s minister of industry and technology, for his good wishes on the success of the space mission.

Al-Amiri said in a tweet that “we also believe that space exploration has always been a means to build bridges and advance our collective human understanding.” This was in a reply to a tweet by Varank in which he said that “each new discovery in space has the potential of increasing international cooperation, serving the interests of the world peace. The success of the UAE in the Hope mission, in which they have been investing for a long time, is worthy of appraisal. Congratulations!”

Turkish media and Arabic outlets sympathetic to it have been propagating the claim that officials from the Gulf countries have been meeting with their Turkish counterparts in a bid to restore active relations following the Gulf Cooperation Council (GCC) summit on 5 January declaring the end of the boycott of Qatar by the Arab Quartet of Saudi Arabia, the UAE, Bahrain and Egypt.

Turkish reports and social media posts by Turkish officials have arrogantly portrayed this as the “Gulf coming back to us,” similar to the way Doha has been portraying the reconciliation with the Arab Quartet as a “victory” for its policies.

The UAE is a larger trade partner, with annual trade with Turkey worth more than $8 billion, while Turkey-Saudi trade is less than $5 billion a year. Turkey is keen on reclaiming strong trade and investment relations with the Gulf countries. Its enhanced relations with Qatar over recent years have poured a few billion from Doha into the Turkish economy. However, the dire economic situation in Turkey would be exacerbated by a Saudi and Emirati drop in trade and investment.

Will Egypt and Turkey normalize ties?

A Dubai-based Saudi analyst told the Weekly that Saudi Arabia was committed to coordinating its policy on common issues with its allies. “If [Turkish President Recep Tayyip] Erdogan is to continue his rhetoric about Egypt and provide a life-line for the Brotherhood, the Kingdom will not accept a deal with him. The same applies to the UAE,” he said.

He suggested that meetings might happen, as there has been no formal severance of relations and trade is still ongoing despite the popular boycott of Turkish goods in the Gulf. “Officially, Saudi Arabia has not boycotted Turkey. But the unofficial boycott has led to Turkish exports to Saudi Arabia dropping by a remarkable 92 per cent in January year-on-year, according to data released by the Turkish Exporters Union,” he said.

The same could be said for Egypt, as it is hard to see a lasting partnership with Turkey, if they continue supporting the opposition.

Furthermore, Egypt’s latest actions in the Mediterranean, although a sign of good will, could also simply be an act of caution to prevent tensions from further developing in the disputed sea.

Egypt-Greece cooperation has not declined in recent weeks, as the Egyptian and Greek navies carried out transient maritime training in the Northern Fleet of the Mediterranean Jan. 28, with the participation of the Egyptian frigate Taba and the Greek HS Hydra F-452 warship that had stopped at the port of Alexandria, where various professional training activities were carried out.

The exercises aim to strengthen joint cooperation between the Egyptian and Greek armed forces, benefit from the bilateral potential of the two countries to achieve common interests and boost maritime security and stability in the region.

Bilateral relations between Turkey and Egypt will therefore probably remain fractured because geopolitical faultlines across the Mediterranean are deepening, despite attempts from both sides to reconcile.