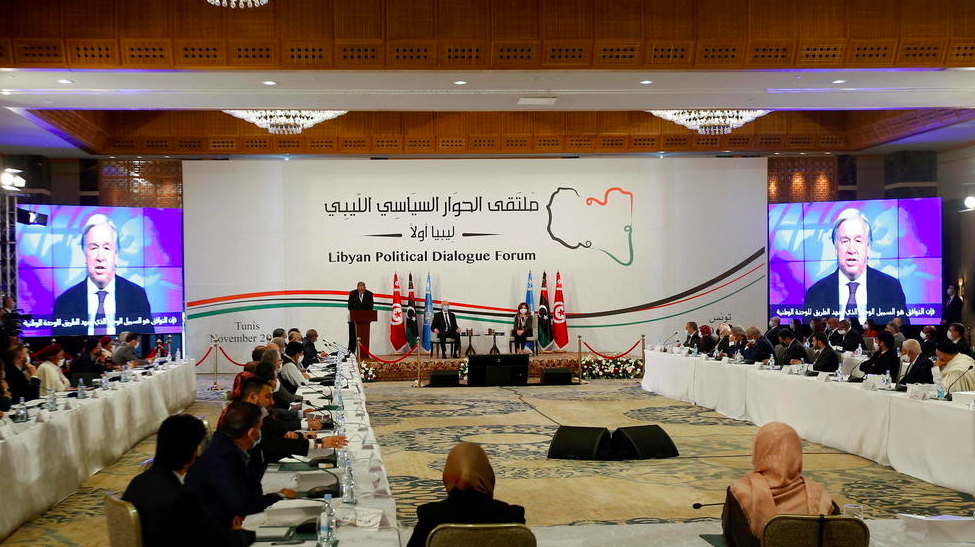 Agreement to elections a major breakthrough

Libya’s warring sides agreed Wednesday to hold elections within 18 months, according to the head of the U.N. Support Mission in the country.

The decision came during the U.N.-sponsored Libyan Political Dialogue Forum (LPDF) which began Monday in Tunisia between representatives of the internationally recognized Libyan government and warlord Khalifa Haftar.

Williams said the agreement is a version of the Suheyrat Agreement, which envisions a political process in Libya. The new roadmap specifically addresses the problems of displaced people in the country, she said, adding it outlines the steps needed to be taken for a unified governance framework and to initiate reconciliation.

The scope and authority of the government and Presidential Council, which will manage the transition process, were also discussed during the meeting, Williams said.

The LPDF is a fully inclusive intra-Libyan political dialogue established by the Berlin Conference Outcomes, which were endorsed by U.N. Security Council Resolutions 2510 (2020) and 2542 (2020).

“There’s real momentum and that’s what we need to focus on and encourage,” envoy Stephanie Williams said at a news conference in Tunis, where 75 Libyan participants chosen by the United Nations have been meeting since Monday.

The meeting has reached preliminary agreement on a roadmap to “free, fair, inclusive and credible parliamentary and presidential elections” that also includes steps to unite institutions, she said.

Libya has been in chaos since 2011 and divided since 2014 between rival factions in east and west, with major institutions also split or controlled by armed groups.

The internationally recognised Government of National Accord (GNA) holds power in the capital Tripoli, while Khalifa Haftar’s Libyan National Army (LNA) holds sway in the east.

Nevertheless, there remain theortetical and practical obstacles to lasting peace.

Less than a month since the signing of a permanent ceasefire, Libya’s oil production is increasing rapidly.

The sudden glut of Libyan oil could provide a challenge to already low oil prices, disrupting a balance created by the Organization of the Petroleum Exporting Countries’ (OPEC) production cuts. In an industry that has been heavily impacted by the consequences of the COVID-19 pandemic, peace provides a challenge.

Libya’s oil output surpassed one million barrels a day on November 7, an important milestone for the country that is heavily dependent on oil revenues. After many years of reduced or completely halted oil production, many in Libya are happy to see their refineries roar again. That optimism is not shared throughout the world, however.

International oil markets have struggled in 2020. A “war” over oil prices between some of the world’s top producers, Saudi Arabia and Russia, sent oil prices on a downward trend even before COVID-19 spread globally. Once case numbers and lockdowns started to make headlines, oil prices were in a world of trouble as global demand fell off a cliff.

As global manufacturing, tourism, and international travel ground to a halt, the demand for oil-based products dropped in a historic way. An industry already threatened in the long-term by climate change now faced oil prices well below anyone’s expectations. For countries whose budgets are largely dependent on oil revenues, budget deficits grew as oil prices ticked down.

Oil-producing countries across the Middle East saw their government budgets shrink by large margins. Iraq, Kuwait, Algeria, the UAE, Saudi Arabia, and many others had their national budgets for 2020 expecting oil prices between $50 and $80 a barrel. Instead, oil prices dropped, with US Brent oil dipping into historic negative prices.

In Libya, Amid production cuts, a sudden influx of a million barrels a day to global oil production has worried experts. Oil prices again slipped below the $40 mark as Libya’s production increased. Libya is eager to recover some of the $130 billion it has lost in oil revenue due to limited production during its bloody civil war.

As oil production now returns to normal levels, Libya’s role as Africa’s largest oil producer is set to return. While Libya will be happy to see an important revenue stream return, for global oil-producing countries the development provides a new challenge in its efforts to see oil prices increase.

The US must not intervene

In order to assure the endurance of peace in Libya, the US must not repeat the same mistakes it committed in the past with its interventions in Libya.

It is now, it seems, a matter of formalities before Joe Biden is inaugurated as the 46th President of the United States of America on 20 January. It is a good time, therefore, to try to preview what his foreign policy towards the Middle East and North Africa (MENA) region might be.

President-elect Biden stands to benefit from his eight years as vice president to Barak Obama. However, that carries certain legacies when it comes to the MENA. During the Obama presidency it witnessed waves of popular protests — the so-called Arab Spring — that uprooted regimes and installed replacements not necessarily to Washington’s liking.

Libya is one country where such events exposed a major US foreign policy failure. Rushing to military intervention in the North African state in March 2011 was Obama’s biggest “mistake”, as he described it himself. The then Vice President Biden opposed the war in Libya but could not do much about it as his boss decided otherwise and got the US military involved in the civil war.

As Obama’s Secretary of State, Hillary Clinton led on US policy in Libya and her only achievement was going to war in 2011 without any plan for what to do once the government of Muammar Gaddafi was overthrown. Obama foolishly left his entire Libya policy to Clinton. At one point she and her team in the State Department, including Susan Rice, the then US Ambassador to the United Nations, pushed strongly for war. They got their way despite objections from Biden and other top administration officials, including Pentagon chiefs.

Just like Obama, the Trump administration had no plan for Libya. Once the GNA forces defeated the LNA, Washington basically gave up apart from rather muted attempts to contain Russian expansion in North Africa.

Now the UN-led mediation efforts are gaining momentum. A new round of political dialogue is underway in Tunisia. The aim is to develop a roadmap that will lead to a short transitional period of power sharing before elections projected for the summer of 2022. Biden’s handling of Libya will become clear after his inauguration in January but it can be said with some degree of confidence that his Libya policy will be constrained by the parameters of the ongoing competition with Russia.

Within that context, we can expect more talk from the new administration but little action when it comes to Libya. We are likely to hear that the US supports the UN efforts in the country but nothing more. This would be a positive sign for peace plans in Libya, as US intervention would be a major interruption of this process.