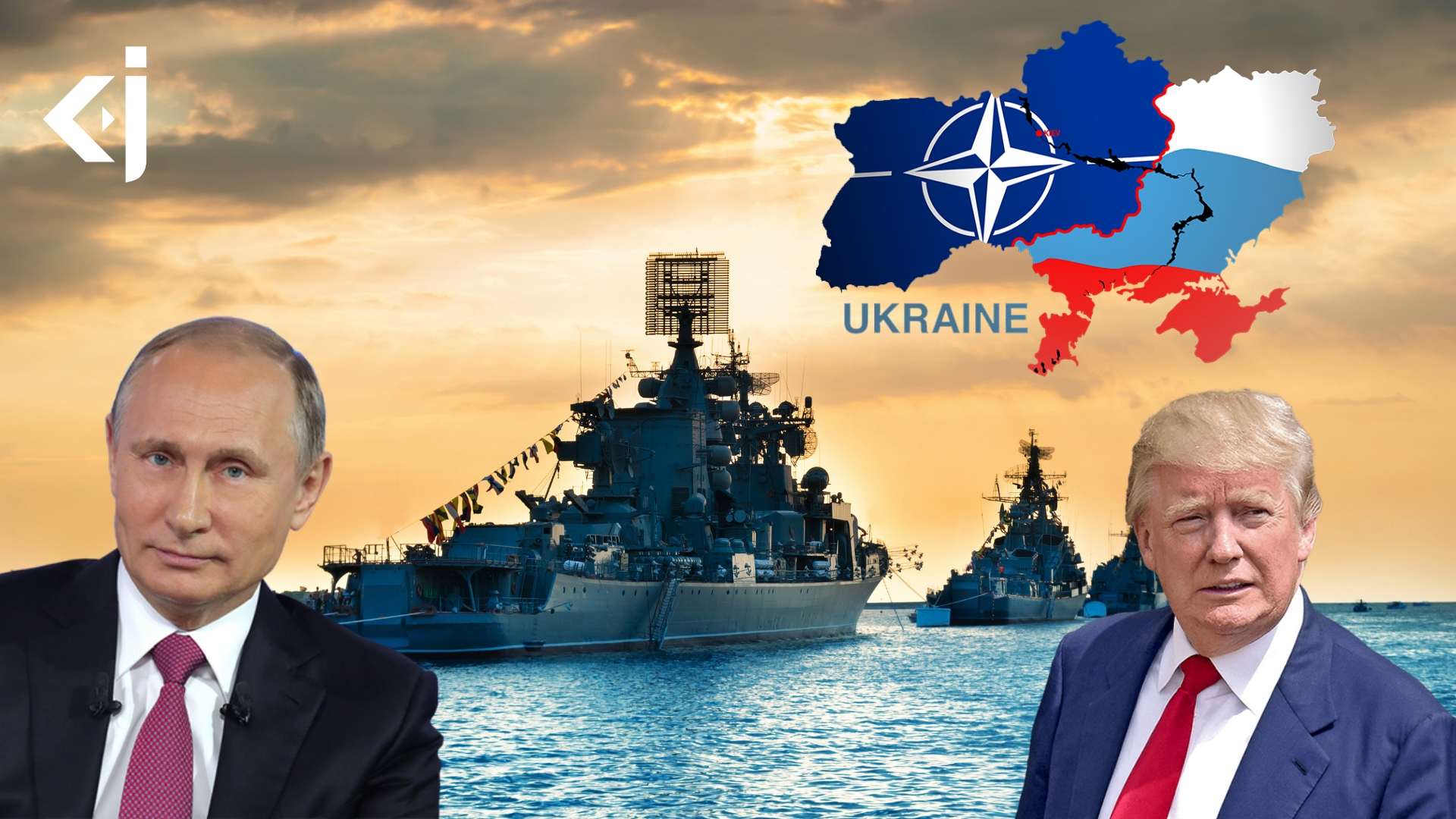 Ukraine is firmly under the US sphere of influence. After the violent protests in Kiev’s Maidan in 2014, when Ukraine’s president Victor Yanukovich was ousted, Russia completely lost control over the former Soviet republic and a very important geopolitical spot.

Moscow tried to compensate the loss of Kiev by annexing Crimea. However, from the political and military perspective, such move cannot be interpreted as Russian victory. Russians already had their own military bases and troops stationed in Crimea, where the majority of population are ethnic Russians. In the winter of 2014, when it became obvious that Ukraine is lost, Russia simply had to do something in order to save its reputation at least as a regional power. It decided to annex Crimea and later to create two proxy states in the Donbass called the Donetsk People’s Republic and the Lugansk People’s Republic. The same year, during the post-Maidan chaos in destabilized Ukraine, Russia had an opportunity to capture a huge area in the southeast of the country, that was historically called Novorossiya, and that is inhabited by the Russian speaking population. Had Russia seized the seven southeastern Ukrainian regions, and not just Crimea, Ukraine would’ve remained a landlocked country without any military and industrial potentials.

Presently, Russian sphere of influence in Ukraine ends at the Donetsk front line. The Novorossiya project was abandoned, and the Kremlin officials and propagandists explained on many occasions that they had to give up Ukraine in order to avoid World War 3. It’s interesting that, on the other hand, Russia sent its troops to Syria to help President Bashar Assad fight the Western backed proxies, without any fears of the World War 3.

Some analysts believe that Russia intentionally gave up Ukraine and the Novorossiya project because, faced with sanctions, it couldn’t have afforded to provide financial assistance to such huge area with more than 15 million people living there. Instead, Moscow annexed the Crimean Peninsula, which is significant due to military bases and the port of Sevastopol. The Kremlin also established two pro-Russian proxy republics in the coal rich Donbass region of Ukraine.

Crimea is now heavily subsidized by Moscow, with no hope of becoming economically self-sufficient in the current political climate. Russia has invested billions of rubles into the peninsula but has yet to resolve the most critical issue: water supply. Crimea, especially its northern region, is heavily dependent on Ukraine when it comes to water and power supply. Following the incorporation of Crimea into the Russian Federation, Ukraine imposed an economic embargo of the peninsula, cutting off its supply of water and power. The embargo resulted in severe economic and ecological problems for northern Crimea. More recently, Russia has established two power stations to strengthen the peninsula’s energy security. However, Moscow has been unable to ensure a sustainable water supply.

The current geopolitical climate means that Moscow will have to manage Crimea like a suitcase without a handle for the foreseeable future. The Kremlin has invested heavily in integrating Crimea into the Russian Federation, but Western sanctions enacted in response to Russia’s behavior have helped to isolate the peninsula, raising prices and inhibiting economic development.

Both, Crimea and the Donbass self-proclaimed republics, consists only about 7% of Ukraine, which, in geopolitical terms, means that the West now has an effective control of 93% of Ukraine. The remaining 7% goes to Russia.

The importance of Ukraine for Russia was well explained by the late Zbigniew Brzezinski, President Jimmy Carter’s former national security advisor, and a senior trustee at the Center for International and Strategic Studies in Washington D.C. In his book “The Grand Chessboard” he outlined that “without Ukraine, Russia ceases to be a Eurasian empire”.

Since Ukraine entered the Western geopolitical orbit in 2014, the US and its allies are now using the country as an instrument against Russia. The Kremlin, on the other hand, is playing on the Crimean and the Donbass card in an attempt to prevent Ukraine from joining NATO. As long as the territorial issues are not resolved, it’s unlikely that NATO will let Ukraine become a member of the alliance. It doesn’t, however, mean that NATO troops won’t be present in Ukraine, and that the US won’t be providing Ukraine all the necessary support against Russia.

The US doesn’t have any reasons to abandon its very successful foreign policy in Ukraine. Therefore, the country will remain a merely a tool used by the West in its geopolitical struggle against Russia. The Kremlin, on the other hand, will unlikely abandon its proxies in Donbass, at least in this phase of the conflict, and will keep using them as a vehicle and a method of pressure on Kiev.

In the long term, Ukraine, backed by the US and NATO, will attempt to reestablish control over the Donbass, be it by force or by negotiations with Russia. At this point, however, it’s unlikely that the Kremlin will agree to return the Donbass republics to Ukraine, which is the main condition for softening Western sanctions on Russia. The economy of both, Donetsk People’s Republic and Lugansk People’s Republic, is heavily linked with Russia, as well as the whole state apparatus of those entities. Although Russian officials pointed out on several occasions that the self-proclaimed republics, according to the Minsk Protocol singed in 2015, should reintegrate into Ukraine, such a scenario would be seen by most Russians as an open betrayal of the pro-Russia fighters in Donbass. The Kremlin would, undoubtedly, try to portray it as another great geopolitical victory of Russian foreign policy, but it’s too risky since President Vladimir Putin’s approval rating is at a near-record low. The lack of his popularity is not caused by the Russian involvement in the Donbass conflict, and the ongoing war in Syria, as some analysts suggest. The main reason why Russia’s trust in its president has fallen to its lowest level since 2006 is a controversial pension reform, and the declining economy. Still, the betrayal of Donbass would certainly negatively affect Putin’s approval rating, which is something that the Kremlin is trying to avoid by all means.

It’s improbable that Ukraine, on the other side, will try to capture Donbass any time soon. It won’t dare to start a massive assault until it gets firm guarantees that Moscow won’t intervene. At this point, Ukraine cannot hope to restore its sovereignty over Crimea either, since it would mean a full scale war with Russia. That’s why Kiev, backed by the West, will likely wait for a serious political crisis that could effectuate the breakup or splintering of the Russian Federation. If such a crisis occurs, Ukraine may seize the opportunity to reestablish sovereignty over Crimea.

In the meantime, apart from tense relations with Russia, and the conflict in the Donbass, Ukraine will have to deal with crucial economic problems. The country is heavily dependent of powerful oligarchs who’ve been running Ukrainian economy and politics since the state declared independence in 1991. Such trends will hardly be changed in the foreseeable future, and it’s more than likely that Ukraine will remain in the orbit of the International Monetary Fund.

The current position of Ukraine, after the recent presidential and parliamentary elections, is similar to Georgia in 2012 after Mikhail Saakashvili lost parliamentary elections. The main frontman was replaced, but the country’s geopolitical vector remained unchanged. The same scenario is expected to be implemented in Ukraine.