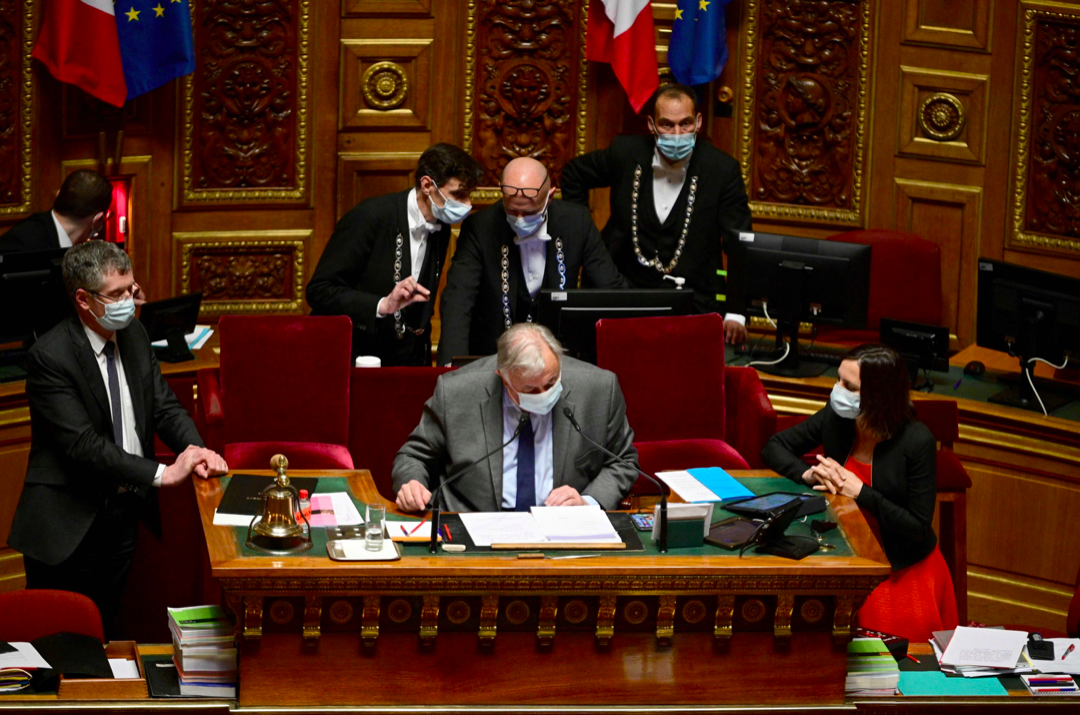 Late last month, the French Senate voted to ban the wearing of the hijab in public places for anyone under 18 years old.

The provision, which is part of a wider ‘anti-separatism’ bill, would also reportedly stop hijab-wearing mothers from accompanying children on school field trips and prevent the wearing of burkinis at public swimming pools.

The hijab ban is not law yet – the bill needs to go back to France’s lower house for final approval – but it has drawn scorn from critics, including in Australia.

Those who oppose the hijab ban say it is the latest erosion of religious freedoms against Muslims in the country and across Europe, where other nations have introduced bans covering Islamic garments in recent years.

France banned wearing a full-face veil in public in 2011, and last month a referendum instigated by a far-right group to ban facial coverings in Switzerland won a narrow victory.

While debating the proposed legislation on March 30, senators approved an amendment to the bill calling for the “prohibition in the public space of any conspicuous religious sign by minors and of any dress or clothing which would signify inferiority of women over men”.

The National Assembly, France’s lower chamber which is dominated by President Emmanuel Macron’s centrist La République En Marche (LREM) party, voted overwhelmingly in favour of the bill on February 16 before it was passed up to the conservative-led Senate.

The French Senate approved Wednesday the addition of a ban on religious practices in university corridors to a controversial bill that French President Emmanuel Macron’s government believes will combat so-called “Islamist separatism,” but which is seen by rights organizations as an obstacle to the rights and freedoms of the Muslim minority in the country.

Discussing the draft bill, which has been criticized for alienating Muslims, the center-right Republicans (LR) party proposed adding a clause prohibiting prayers in university corridors as well as banning religious activities that might hinder educational activities. Although Left Party senators and Education Minister Jean-Michel Blanquer objected to the proposal, it was accepted through the votes of the right-wing senators.

Human rights group Amnesty International said earlier that the new regulations “would be a serious attack on rights and freedoms in France.”

“Time and again we have seen the French authorities use the vague and ill-defined concept of ‘radicalization’ or ‘radical Islam’ to justify the imposition of measures without valid grounds, which risks leading to discrimination in its application against Muslims and other minority groups,” Amnesty International’s Europe researcher Marco Perolini said, adding that “this stigmatization must end.”

The legislation has been debated in a highly charged atmosphere in France after three attacks late last year, including the beheading on October 16 of teacher Samuel Paty, who had shown his students caricatures of the Prophet Muhammad during a lesson on free speech.

Furthermore, while Macron’s government says the bill will highlight the country’s secular system, experts and critics accused the French president of attempting to pander to right-wing voters. They argued that Macron, who faces competition from the far-right ahead of next year’s presidential elections, used the law to thwart divisive rhetoric and they see it as a populist movement.

However, another justification brought up by Macron, and a possible reason for the passing of such laws, is their view of Muslims in France being subject to increasing foreign influence by ideological ‘allies’ like Turkey.

The unfinished Eyyub Sultan mosque in France’s eastern city of Strasbourg has become a repository for myriad grievances, ranging from local partisan wrangling to longstanding friction between Islam and this country’s staunchly secular creed. Claiming concern over foreign — and specifically Turkish — meddling, a top French official launched legal proceedings this week against a decision by Strasbourg’s leftist government to subsidize the construction of the mosque, designed to be Europe’s largest.

Last year, for example, France moved to ban a Turkish ultra-nationalist group called Grey Wolves, after its members were accused of defacing an Armenian genocide memorial near Lyon. Other European countries, including Germany, are considering similar steps.

French lawmakers are also debating legislation against extremism, which would ban foreign funding of religious groups. Among those potentially in its crosshairs: Turkish association Milli Gorus, the main backer of the Strasbourg mosque.

In an interview with French radio Tuesday, Macron’s hard-line interior minister Gerald Darmanin threatened to dissolve Milli Gorus and others he deemed “enemies of the Republic,” noting the Turkish association’s refusal to sign a new government charter against extremism.

There have therefore been growing signs that France’s policy on Islam is closely related to, and amplified by its increased hostility towards Turkey and Erdogan’s government, although other factors mentioned above have also contributed to this clampdown on Islam.