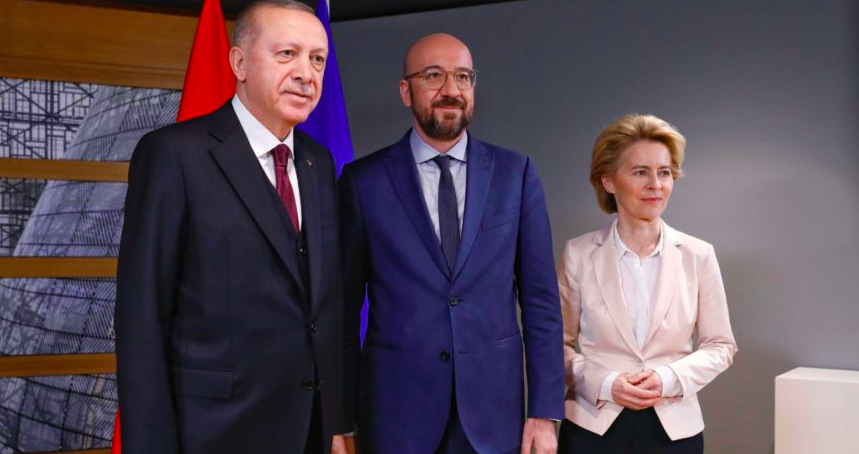 “This agreement is still valid and its implementation should continue,” he added.

Most of the EU funding under this agreement goes directly to immigrants, not the Turkish government, he noted.

“On Turkey, also we have a momentum, a good momentum, following their exploratory talks with Greece,” Borrell said.

“I will present a report to the European Union leaders where I will outline current trends and suggest a way ahead to consolidate a constructive attitude while at the same time being ready to take measures if necessary,” he stressed.

Top EU officials are scheduled to hold a videoconference with Turkey’s president on March 19, the European Commission’s chief spokesperson has announced.

The talks are to be held in preparation for the EU leaders summit next week, when EU heads of state and government will discuss the future of the bloc’s relationship with Ankara.

EU foreign policy chief Josep Borrell, who was tasked to draft a report on the subject, suggested on Monday the renewal “in some form” of the EU-Turkey migration deal signed in 2016 to stop irregular flows of asylum seekers to Europe and to improve the conditions of Syrian refugees in Turkey. More on the deal and its importance will be discussed in the last section of this article.

A large stimulant of EU-Turkey ties in recent months, has been the latter’s attempts to solve the Mediterranean crisis through diplomatic means, therefore holding talks with Greece to attempt to come to a solution.

Senior diplomats from Greece and Turkey have met in Athens in an effort to ease longstanding maritime disputes before a European Union summit later this month.

Diplomatic sources said another round of talks resumed in a central Athens hotel on Tuesday, however, no details were given on the substance of the meetings.

The two neighbouring NATO allies are at odds over issues such as competing claims over their respective continental shelves, maritime rights, and air space in the Mediterranean, energy, ethnically split Cyprus, and the status of some islands in the Aegean Sea.

Underlining the tensions, Turkey this week protested against a deal between Greece, Israel and Cyprus for an undersea cable linking their electricity grids.

According to the state-run Anadolu news agency, Ankara believes the planned route for the cable runs through Turkey’s continental shelf.

Ending a five-year hiatus, officials met in January after months of tension in the eastern Mediterranean.

Athens has said it will discuss only the demarcation of exclusive economic zones and the continental shelf in the Aegean and eastern Mediterranean, not issues of “national sovereignty”.

Ankara, which hopes to improve its relations with the EU – which has supported EU-member Greece and threatened sanctions on Turkey – has said it wants all issues, including air space and the Aegean islands, on the table.

European leaders are also expected to discuss the eastern Mediterranean at a meeting on March 25-26. Forecasts are currently positive, believing that the EU will likely refuse sanctions on Turkey and work to build ties.

Refugee deal at the centre of EU-Turkey ties

The most important binding aspect of EU-Turkey relations in recent years, is the refugee deal agreed between the two parties in 2016.

As mentioned in the first section, Josep Borrell told a news conference on Monday that it was in the Union’s interest to support Turkey’s efforts to host refugees and stop illegal immigration, adding that The EU will seek to renew the 2016 immigration agreement with Turkey.

According to the deal, “all new irregular migrants crossing from Turkey to the Greek islands as of 20 March 2016 will be returned to Turkey.”

As per the deal, one Syrian refugee can be resettled in the EU in exchange for every Syrian being returned to Turkey from the Greek islands.

Turkey is responsible for controlling and guarding new sea or land routes in order to keep irregular migrants en route to the EU at bay.

The EU pledged to allocate €6 billion($7.3 billion) in financial assistance until 2018 for the Turkish government to finance projects for Syrian refugees. Moreover, working to improve humanitarian conditions inside Syria is another element approved by the parties involved in the deal.

Apart from the clauses related to refugees, parties have reached an agreement over lifting the visa requirements for Turkish citizens with regards to entrance into the Schengen area by the end of June 2016.

Turkey also agreed to “take all the necessary steps to fulfil the remaining requirements” on the visa liberalisation roadmap.

Turkey has repeatedly complained that the EU failed to allocate the full €6 billion as pledged, as well as seeing through other promises it made.

“We have made invaluable contributions to the security of the entire European continent, particularly to the Balkan countries. However, we did not see the support and humanitarian attitude that we expect from our European friends during this difficult time,” Turkish President Recep Tayyip Erdogan said in July 2019.

However, last December, the EU announced that it had finished giving the money that it pledged in 2016.

Last year, in March, Turkey opened European borders to refugees after warning of the posed risk to them and other migrant situations getting out of control.

However, three weeks later, Turkey closed its borders for refugees after several meetings with European leaders. The coronavirus pandemic was also to blame.

Since the deal, the number of irregular migrants entering Europe has significantly decreased thanks to Turkey’s efforts to prevent refugees who try to cross its borders into Europe. The investment to develop infrastructures for about four million refugees has also helped.

“It has led to a significant decrease of loss of human lives, a reduction in irregular crossings and improved the situation of refugees and migrants in Turkey,” Borrell said on Monday following a joint meeting of EU foreign affairs and interior ministers.

Now, recent signals from Brussels and Ankara suggest that an arrangement will be found to resuscitate the March 2016 “EU Turkey Statement”

“I think it should continue to be implemented and continue to be the key framework for cooperation on migration,” EU foreign policy chief Josep Borrell said Monday, a week before he submits a report to a summit of the 27-nation bloc’s leaders on the troubled state of EU-Turkey ties.

The visa and accession talks, however, have been at a standstill for years and are unlikely to budge.

“Turkey has fulfilled all of its obligations since 2016,” Cavusoglu said, and he encouraged the Europeans to respond to Turkey’s proposals to upgrade the agreement, which he said includes support for refugees willing to go back to Syria.

“We now need to ensure the Syrians’ voluntary, secure and honorable return and we have to meet the basic humanitarian needs of those who return,” he said.

That leaves the EU in a bind. The Europeans don’t consider Syria a safe country to send refugees. But Turkey has maneuvered itself to the center of Europe’s interests. It plays a role in Syria and Libya — another source of many migrants — and is a key player in talks on the divided island of Cyprus resuming next month.

Despite the challenges, EU foreign and interior ministers discussed again this week how to develop better “partnerships” with other countries that migrants leave or transit, mostly in Africa, using trade, development assistance, investment, education and visas as carrots and sticks. It is therefore likely that the continued cooperation between the EU and Turkey on the refugee crisis, will accelerate and maintain EU-Turkey ties, while Turkey’s willingness to engage in talks on the Mediterranean, has also positively impacted ties.