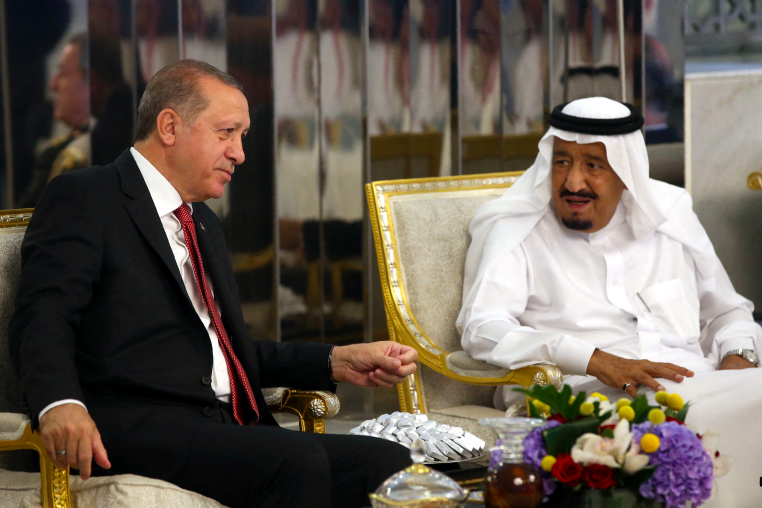 Turkish President Recep Tayyip Erdogan and Saudi Arabia’s King Salman bin Abdulaziz have discussed bilateral ties in a call, the second conversation between the two leaders in less than a month.

In a brief statement late on Tuesday, Turkey’s communications directorate said the two leaders “evaluated” matters on issues affecting both countries “and steps to be taken to further the cooperation”.

Turkey is seeking to improve ties with Saudi Arabia after they were thrown into crisis by the 2018 killing of journalist Jamal Khashoggi by a Saudi hit squad inside the kingdom’s consulate in Istanbul.

Last year, Saudi businessmen endorsed an unofficial boycott of Turkish goods in response to what they called hostility from Ankara, slashing the value of trade by 98 percent.

Erdogan’s spokesman Ibrahim Kalin last month said that Erdogan and King Salman had “a good call” in April and that the foreign ministers of the two countries had agreed to meet.

Tuesday’s conversation came a day before a meeting between Turkish and Egyptian officials in Cairo, the latest step in Turkey’s push to mend relations with another United States-allied Arab power.

Turkey is seeking to improve ties with the Gulf Arab state after they were thrown into crisis by the 2018 killing in Istanbul of journalist Jamal Khashoggi by a Saudi hit squad.

Are such talks insignificant?

As Erdogan calls King Salman for the second time in a month, questions are arising as to the importance and significance of these talks. King Salman has for the past couple of years slid into the background of Saudi diplomacy, with Crown Prince Mohammed Bin Salman coming to the forefront. The exclusion of Mohammed Bin Salman from reparation talks could therefore signify their futility.

Supporting this, Saudi-Turkish ties have continued to struggle in recent months, despite Turkish attempts at reconciliation.

Turkey’s exports to Saudi Arabia all but dried up in April, according to official data, remaining at a historic low amid monthslong informal blockade by the kingdom.

Sales to Saudi Arabia plunged by 94.4% year on year to only $11.25 million, according to the Turkish Exporters Assembly (TIM) data. Exports have dropped from around $201 million (TL 1.67 billion) a year ago.

There have been efforts in recent months to repair some diplomatic damage after a decade of tension, especially after the 2018 murder of dissident Saudi journalist Jamal Khashoggi in Saudi Arabia’s Istanbul consulate.

Aside from the Khashoggi incident, Saudi Arabia’s rapprochement with Israel, support of the coup in Egypt and its stance on Libya and Syria have been other points of contention between Ankara and Riyadh.

The unofficial boycott is a clear representation of the power of Mohammed Bin Salman in the country, and consequently the futility of ‘official’ contacts with King Salman.

Furthermore, Saudi Arabia is planning to close eight Turkish schools affiliated to the Ministry of National Education and operating across the Kingom by the end of the current academic year, Anadolu has reported. The Saudi Education Ministry delivered its closure notices to the schools in Tabuk, Riyadh, Ta’if and Jeddah provinces, while officials visited the schools in Dammam and Abha to inform the authorities about the decision.

“Activities at the Turkish schools will be terminated at the end of this academic year,” said the ministry. “Transfers of students to other schools of their choice will be facilitated. The school administrators should inform parents about the decision.”

In August 2019, the ministry made a series of modifications to its school textbooks altering the legacy of the Ottoman Empire in the Arabian peninsula and referring to it as an “occupation”.

Although Saudi Arabia in the initial phase of US President Biden’s presidency showed signs of its intention to repair ties with Turkey, Biden’s later lightening of his stance towards the Kingdom and specifically MBS led to the backpedalling of any such plans, largely because Saudi would not need to geopolitically reshuffle anymore.

There is still hope for the reparation of ties, but MBS must be an integral part of that process, something that still remains unlikely.

Turkey’s recent acceleration of reconciliation with Egypt could stimulate the opening of Saudi Arabian willingness to mend ties as well, due to Egypt’s geopolitical importance, and strong ties with the Kingdom.

Egypt and Turkey will hold two days of political consultations in Cairo on Wednesday and Thursday as part of a push to mend ties between the regional rivals, the two countries said.

“These exploratory discussions will focus on the necessary steps that may lead towards the normalisation of relations between the two countries, bilaterally and in the regional context,” a statement released by the foreign ministries of both countries said on Tuesday.

Turkey and Egypt have been at odds in recent years over their conflicting positions on the Muslim Brotherhood, the war in Libya, and maritime borders in the Eastern Mediterranean. Relations have been strained since Egypt’s army toppled a democratically elected Muslim Brotherhood president close to Turkey in 2013 in what Ankara said was a military coup.

Another reason for optimism is that Turkish Foreign Minister Cavusoglu plans to travel to Saudi Arabia on 11 May, the first such high-level visit since the murder of journalist Jamal Khashoggi in 2018, two people familiar with the issue told Middle East Eye. It will be Cavusoglu’s first trip to Riyadh in four years.

The visit was scheduled during a phone call between Turkish President Tayyip Erdogan and Saudi King Salman on Tuesday night, where two heads of states discussed bilateral ties.

CNN Turk reported that Erdogan complained about the Saudi decision to permanently close down eight Turkish state schools operating in the kingdom.

The report added that Erdogan’s chief policy advisor İbrahim Kalin made some high-level contacts with Saudi counterparts in an effort to defuse tensions that have kept the two regional powers apart in recent years.

Cavusoglu is expected to make attempts to repair bilateral ties during the visit, but the closure of Turkish schools will be a top issue, sources told MEE.

Turkish Saudi ties certainly have several prospect of improving, as shown above, but Mohammed Bin Salman’s inclusion is a must if talks are to progress to the next stage and for any significant progress to take place.