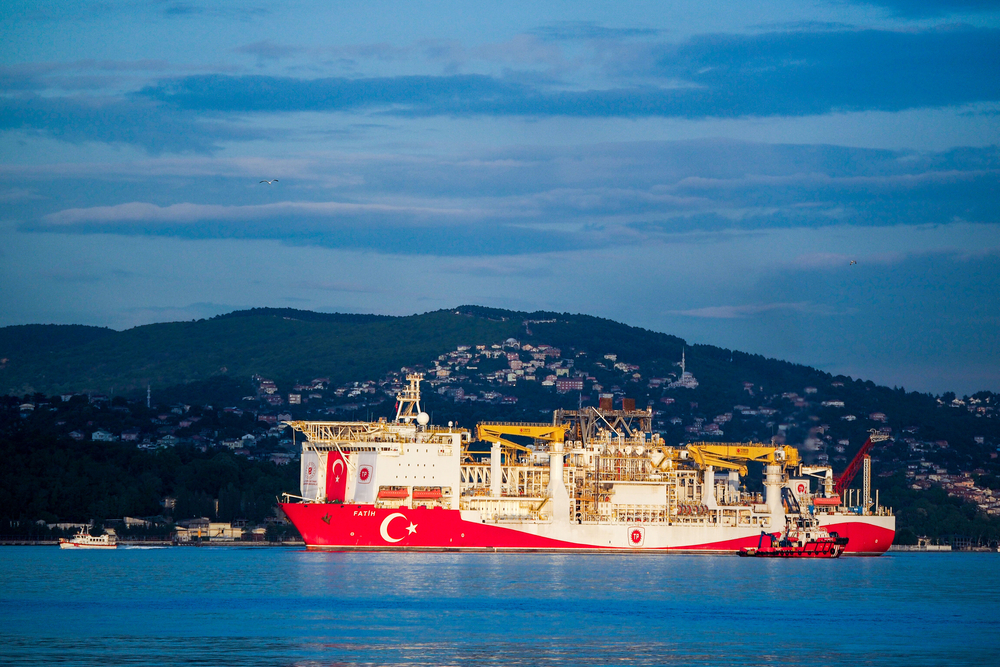 Turkey has made a big discovery of natural gas in the Black Sea, President Recep Tayyip Erdogan claimed, as he hailed the find as a historic step for the country’s troubled economy and its energy security. Mr Erdogan said that exploration by Turkey’s state-owned petroleum company had found 320bn cubic metres of gas the largest in the country’s history. He said that he hoped that production would begin as soon as 2023. “As a country that has suffered problems for years as a result of our dependence on foreign energy sources, I believe that we can now look to the future with greater confidence,” Mr Erdogan said. He added that Ankara would also accelerate its efforts to find gas in the eastern Mediterranean, where it is embroiled in a bitter dispute with Greece and Cyprus over sharing of hydrocarbon resources.

The Fatih has been drilling to a depth of 3,500 to 4,000 meters (11,500 to 13,000 feet), Energy Minister Fatih Donmez said last month. Turkey’s state-run oil company TPAO, however, has no experience in deep-sea gas production and would likely need to enlist a major firm to exploit a field. With oil and gas prices having slumped, the economics of developing such a find may be less attractive than in the past.

Tuna-1, some 150 kilometers from Turkey’s coast, is close to an area where maritime borders of Bulgaria and Romania converge and not far from Romania’s Neptun block, the largest gas find in the Black Sea in decades discovered eight years ago by Petrom and Exxon.

Romania has shallow-water gas projects, but a major deep-water find by OMV Petrom SA eight years ago has still to be exploited. A company backed by the Carlyle Group is also exploring off Romania, aiming to get gas in 2021. Rosneft has explored in the Russian part of the Black Sea but without concrete results.

“I don’t think it is that surprising more findings coming from there,” said Christoph Merkel, managing director of Merkel Energy consultancy. “Bulgaria, Ukraine, Greece might be among the ones very interested in buying that gas, if Turkey decides to export it.”

The size of the field, if confirmed, would be about 40 per cent as large as Egypt’s supergiant Zohr field that was discovered in the eastern Mediterranean in 2015.

Turkey will definitely benefit geopolitically from this discovery, as its heavy reliance on gas imports and lack of energy independence has been its main geopolitical weakness blocking the country from taking more decisive roles against Russia for instance.

Turkey bought three drilling ships in recent years as it dramatically expanded energy exploration in the Black Sea and contested waters of the eastern Mediterranean. It’s keen to find sizable energy reserves to ease its heavy reliance on imports from Iran, Iraq and Russia, and support one of the biggest economies in the Middle East.

Turkey has for a long time been planning drilling operations in the Mediterranean, with an aim to diversify its energy sources, and increase Maritime security. President Recip Tayyip Erdogan has consistently aimed for freedom in executing his foreign policy agenda, of which energy concerns are pivotal.

Turkey’s domestic energy supply is far outstripped by demand, making resource portfolio diversity key to the country’s energy security. Turkey overwhelmingly relies on energy imports to power its needs approximately 75 percent of its total. Predominantly reliant on fossil fuels, natural gas provided for 28 percent of annual demand in 2018, much of which goes towards heating and electricity production. For the past several years, around one-half of this gas has been imported from Russia, leaving Turkey politically and economically vulnerable. As a consequence, Erdogan feels justifiably exposed when Turkey’s agenda clashes with that of Russia. Just now, Erdogan and Putin’s marriage of convenience is being stress-tested in Syria and Libya, where conflicting Mediterranean interests have come to the fore at last.

As the possibility of a rift between Turkey and Russia is always present, so too is Erdogan’s awareness of this, and his intention to increase Turkey’s independence. Turkey’s aim to reposition itself geopolitically includes reshaping Turkey as a natural gas hub, an enduring objective.  Erdogan’s “Vision 2023” goal is to lower Turkey’s energy intensity by at least 20 percent. That is what makes the latest gas find in the Black Sea so significant for Turkey.

Turkey’s natural gas imports from Iran and Russia declined by 44.8% and 41.5%, respectively in the first half of this year compared to the same period of 2019, according to Energy Market Regulatory data compiled by Anadolu Agency on Monday. Turkey’s natural gas imports in the January-June period of this year dropped by 3.5% to 22.5 billion cubic meters (bcm). Out of this amount, Turkey imported 12.1 bcm via pipeline and 10.3 bcm as liquefied natural gas (LNG). This is a positive sign, and the latest discovery will slash these figures even further.

The country imported the highest amount of gas at 5.44 bcm in the first half of this year from Azerbaijan, marking a 23.4% increase compared to the same period of 2019. Transmission from the Trans Anatolian Natural Gas Pipeline was a factor in the growth of imports. Turkey and Azerbaijan have been strategic partners over the years since Azerbaijan regained its independence, and the two states also share close cultural, ethnic and kinship ties. This mutually beneficial cooperation spans across many spheres, including among others, also energy. Very recently, Azerbaijan’s gas exports in Turkish market started to increase thus taking up large share that previously belonged to the Russian Federation. In March his year 924.28 cubic meters of gas was exported to Turkey, which is 19,63% more compared to the same period of 2019. In the first quarter of 2020 Azerbaijan accounted for 18% (2.7 billion cubic meters) of gas in Turkish market, while Russia’s share in the same period decreased to 24.5 % (3.7. billion cubic meters) from 31% in the first quarter of 2019. Beyond the fact that Azerbaijani gas comes in cheaper and therefore is a good alternative to the gas received from other sources, the commencement of TANAP lately also played a big part in facilitation of exports and increase of gas volumes received by Turkey.

It is clear that Turkey’s reduced reliance on Russia for gas has already started through increased imports from Azerbaijan. This along with Turkey’s latest gas discovery could lead Turkey to be increasingly geopolitically independent, and act more decisively in Syria and Libya.

Will this save Turkey’s economy?

Turkey’s latest gas discovery could have a big positive impact on its economy, reducing its trade deficit significantly, and helping Turkey come out of its economic crisis in recent years.

Berat Albayrak, Turkey’s finance minister and Mr Erdogan’s son-in-law, said the find would enable Turkey to eliminate its current account deficit. The announcement came as Mr Albayrak and other policymakers have struggled to combat mounting concern about the health of the country’s economy, with the lira hitting a series of record lows against the dollar in August. The currency had rallied as much as 3 per cent in recent days after Mr Erdogan hinted at “good news” and media reports suggested an energy find as large as 800bn cubic metres. The lira ended the day down 0.7 per cent after the president spoke.

Turkey’s recent discovery has the potential to transform the country into a net exporter of hydrocarbons, as opposed to one with a huge fuel import bill, at a time when its economy faces increased pressure, with ratings agency Fitch lowering its outlook on the country’s sovereign rating last week. So how significant is this discovery and what are the implications for its economy and for other gas producers in the region? The find of a new gas field is the biggest in its history. The 320 billion cubic metre reserve field in the Black Sea could transform the country into a net exporter by 2023. The announcement comes during a difficult period for the Turkish economy, with finance minister Berat Albayrak last week forecasting the country’s GDP would fall between 1 per cent growth and 2 per cent contraction. Citigroup analysts have forecast a 3 per cent contraction, according to Reuters. Fitch Ratings lowered its outlook based on its view that interventions made to shore up its currency, which has dropped by 16 per cent against the dollar since March, has weakened its foreign exchange reserves.

“Gross FX reserves (including gold) fell to $88.2 billion (Dh323.9bn) in mid-August from $105.7 billion” at the end of last year, the ratings agency said, despite a $40.5bn boost from regulatory changes shrinking the size of the offshore swaps market and a $10bn increase in swap lines agreed with Qatar in May. The country is currently heavily reliant on energy imports, which reached $41 billion last year. The potential for self-sufficiency in energy as well as the possibility of reaching export potential in three years could provide a boost to its revenues as well as reducing its debt burden from importing energy.

An average of 48.7 bcm of natural gas has been consumed in Turkey over the last four years, according to Energy Market Regulatory Authority (EPDK) data. Accordingly, it is estimated that the 320 bcm of natural gas found by the Fatih drillship at the Tuna 1 well, in the Sakarya Gas Field, which is around 170 kilometers off the country’s Black Sea coast, could meet Turkey’s energy needs for seven years. Economists calculate that the annual cost of natural gas imports is above $10 billion-$13 billion which means the discovered reserve can contribute up to $10 billion to the current account deficit.

However, some experts believe that Turkey’s latest discovery will not save its struggling economy. While Turkey may well have found valuable reserves of natural gas – the government says they amount to 320 billion cubic metres – Friday was not, as the government claims, the first time Turkey has discovered hydrocarbons, Karaalioğlu said in an article for Karar newspaper. “There’s no point in either exaggerating or underplaying it,” he said. “Turkey’s economic difficulties continue,” Karaalioğlu said, citing low manufacturing production levels, lack of technology, an insufficiently qualified workforce and other structural issues. “Natural gas and petrol are no solution to this,” he said.

Nevertheless, even if it does not save Turkey’s economy immediately, the latest gas discovery is a major economic boost for the country, and further discoveries in the Medditeranean could help Turkey become energy-independent, which could be a big step to Turkey becoming a superpower.