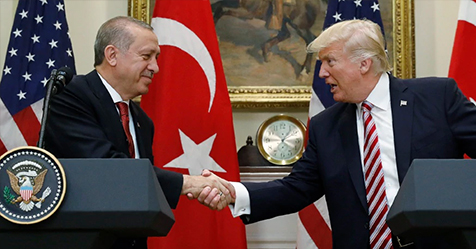 On December 5th 2017, KJ Vids ran a poll amongst it’s 270,000 Facebook fans and asked the question “Should Erdogan cut political, economic and military ties with Israel and America for crossing a “Red Line.”

We received a total of 7,000 votes and the results were a landslide victory for “YES” with 83% of people voting “Yes” to the question and only 17% voting no.

With Trump disregarding such warnings, the Turkish president used his position as the current chairman of the Organisation of Islamic Cooperation (OIC) to call a summit of the group.

President Recep Tayyip Erdogan, who has accused the United States of ignoring Palestinian claims to Israeli-occupied East Jerusalem and “trampling on international law”, has invited leaders from more than 50 Muslim countries to agree on a response.

Albeit years of rhetoric, Turkey in 2016 agreed to resume full diplomatic relations with Israel after the crisis triggered by the deadly storming by Israel of a Turkish ship seeking to break the Gaza blockade in 2010.

Trade and energy deals have prospered increasing year to year. Cooperation has resumed, most significantly in energy.

We wanted to see if our fans believed that Erdogan should follow through on his critical words with political action. The result was a resounding “Yes”