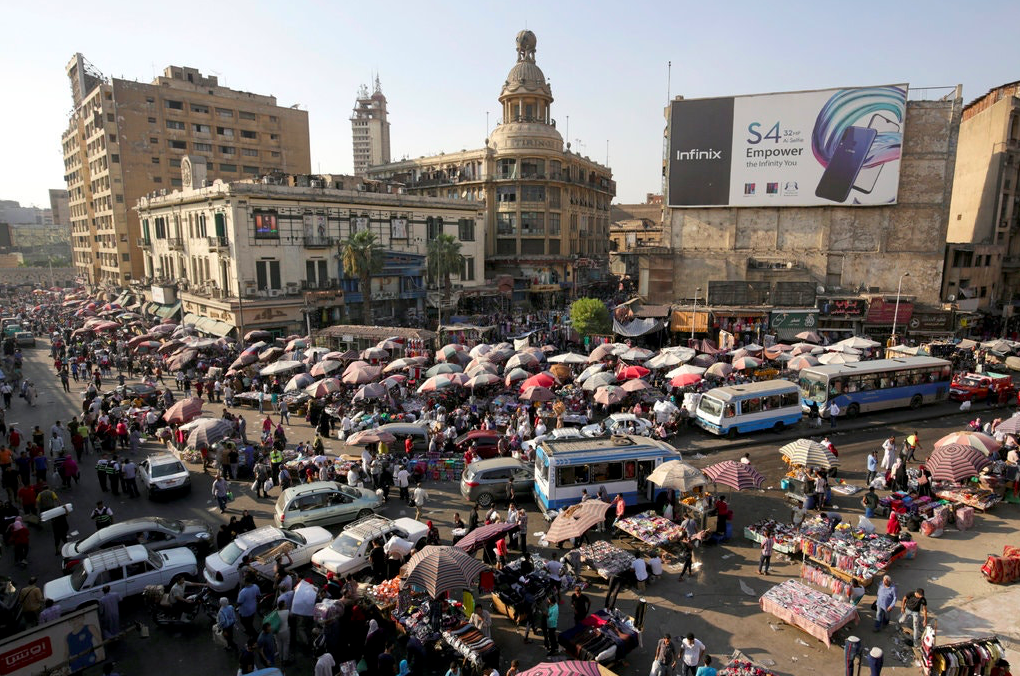 Egypt is the most populous country in the entire Middle East and the third-most populous on the African continent, after Nigeria and the Democratic Republic of the Congo. About 95% of the country’s 100 million people (February 2020) live along the banks of the Nile and in the Nile Delta, which fans out north of Cairo; and along the Suez Canal.

Egypt’s cabinet said last year that it was on “high alert” to fight population growth, which President Abdel Fattah el-Sisi has described as a threat to national security on par with terrorism. If unchecked, the population could reach 128 million by 2030, officials say.

Fertility rates have risen since 2008, to 3.5 children per woman, according to the United Nations, and the population is growing 1.8 percent annually — a rate that, in Egypt’s crowded cities and towns, adds one million citizens every six months.

“The kids are coming thick and fast,” said David Sims, a lecturer at the American University in Cairo and author of “Understanding Cairo: The Logic of a City Out of Control.” “What the hell are they going to do?”

Fertility rates are highest in rural areas, where a large family is considered a blessing. But their impact is felt most keenly in greater Cairo, where a sprawling megalopolis of about 20 million inhabitants is spilling into the surrounding desert and farmland.

The disastrous effects it could have

President Abdel Fattah al-Sisi addressed Egypt’s rapid population growth in a speech on Tuesday, stating that having more than two children per family is a very big problem and spreading awareness of the rapid growth’s danger is necessary.

“We do not seek to solve this problem by issuing severe laws,” Sisi emphasized, during the inauguration of the Ismailia Medical Complex.

“We are working on a program to confront the increase in population…and provide the services required for this matter,” he added.

He explained that the rate of population growth must be proportional to the resources available to the state, explaining that an increase in population negatively affects all sectors. Sisi indicated that living conditions are not improving and the Egyptian people will not notice significant improvement until the population growth rate is under control.  A country requires funding proportional to its population size, Sisi said, and with Egypt’s population of 100 million, the country needs roughly LE15 trillion.

If these funds are not provided, all sectors will be negatively affected, according to Sisi.

Egypt’s rising population is placing a great burden on the state, warned Minister of Health and Population Hala Zayed, who noted that an annual increase of two million people costs the state LE54.5 billion.

During her speech at the inauguration, Zayed explained that an annual increase of two million people would require an extra LE54.5 billion for the country’s medical services alone.

How is the government responding?

In collaboration with the UN, Egypt launched the “Etneen Kefaya” (Two is Enough) campaign in 2018. It seeks to raise awareness among Egyptian women regarding the importance of birth control and providing contraceptive methods, Al-Ahram reported.

According to al-Ahram, the program was supported by around 100 non-profit organizations that trained volunteers to spread messages of awareness to its target audience.

Concerning education, Minister of Planning and Economic Cooperation Hala al-Said pointed out that the “number of students in Egypt will become 44 million in 2052 up from 22 million now, if the same rate of population growth continues. That would require the increase of the current capacity of classrooms and teachers by four times.” The minister added that the ideal Egypt must reach is 1.9 child per woman.

Since family planning is key to manage the crisis, Minister of Social Solidarity Nevine al-Qabaj stated that five million visits were made to 750,000 rural women to raise their awareness on family planning within “Two Are Enough” campaign.

Under Mr. el-Sisi, the government has dispatched thousands of family planning advocates into rural areas and offered cheap contraceptives — as little as 6 cents for a packet of three condoms in a government store and 12 cents for an intrauterine device.

The country’s leading Islamic authority, Al Azhar, has endorsed the government plans and stressed that family planning is not forbidden by God.

But critics say the government mostly talks a good game on population control and that its actions have not matched its slogans. Mr. el-Sisi’s wife has not been a visible force on family planning, while his officials have tried to dent the problem with public health programs.

“Overpopulation is eating everything,” said Dr. Amr A. Nadim, an obstetrician-gynecologist at Ain Ain Shams University. “But I don’t feel the government is working all that hard on it.”

He listed the issues: an erratic supply of contraceptives of variable quality; poor medical training; American government funding that dried up; and no longer obliging new doctors to take family planning courses.

Egyptian President Abdel-Fattah El-Sisi highlighted on Tuesday the need for the country to lower the annual population growth rate to 400,000 in order for citizens to reap the fruits of development efforts.

In her speech before the president during the inauguration of a number of healthcare projects Tuesday, Minister of Planning and Economic Development Hala El-Said presented different scenarios pertinent to possible rates of population growth.

“The country is witnessing a rapid and steady increase in population growth rates, noting that the number of births in 2020 recorded 2.332 million at a rate of 194,000 births per month, 6480 births per day, and one birth every 13 seconds,” El-Said explained.

She noted that despite the efforts of the state, the general trend of the demographic issue in Egypt is moving in the direction of decline and then rise.

However, optimism remains as Spokesperson of the Ministry of Health and Population Khaled Megahed revealed Sunday that the net growth of population per 1,000 individuals dropped to 17.6 in 2020 from 18.7 in the previous year as the number of births recorded 23.4 compared to 24.5.