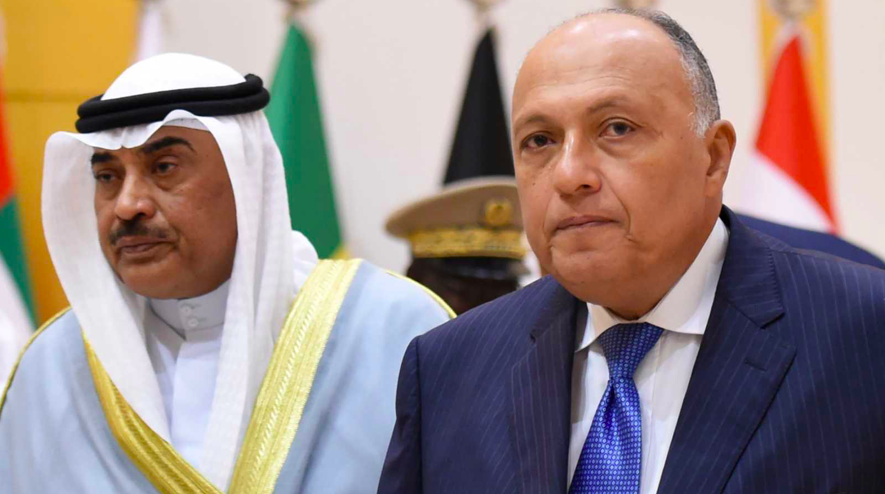 Delegations from Qatar and Egypt met in Kuwait on Tuesday for the first time since an agreement last month to end a rift with Doha.
The Egyptian foreign ministry said both sides have welcomed the decisions taken after signing the Ula agreement in Saudi Arabia “as a step on the path of building trust between the brotherly countries.”

The meeting also discussed “ways and measures that should be taken to bolster collaboration and bilateral ties between both countries, in what meets the expectation of their people and achieves stability and development.”

Both sides have expressed their appreciation for efforts at the Al-Ula summit that saw Saudi Arabia, the UAE, Bahrain and Egypt agree to restore diplomatic, trade and travel ties with Doha.

Since the agreement, air and travel links have resumed between Qatar and the four states.

Ahead of the signing of the agreement, Egyptian President Abdel Fattah al-Sisi had clarified his country’s position on the Gulf reconciliation process, saying in a statement on Jan. 2, “The Egyptian policy focuses on achieving cooperation, building and supporting Arab solidarity as a solid strategic approach, within a framework of mutual respect and non-interference in internal affairs, and adhering to sincere intentions to achieve the common interest, as well as maintaining solidarity to ward off risks threatening the Arab nations and safeguarding their national security.”

Some 300,000 Egyptians currently reside in Qatar and work in various businesses and professions. Qatar didn’t interfere in the workers’ residences, giving them the freedom to either continue to work or return to Egypt. It was the Egyptian government that stopped the trips to Qatar.

Tensions between Egypt and Qatar had been building up in the past years over the Gulf country’s support for the Muslim Brotherhood, which Egypt banned following the ouster of President Mohammed Morsi in 2013. Saudi efforts to mend the dispute in 2014 failed, and the crisis culminated in 2017 when Egypt joined Saudi Arabia, the UAE and Bahrain in cutting ties with Qatar over its support for the Muslim Brotherhood.

Egyptian-Qatari relations have passed through critical stages since Sheikh Hamad bin Khalifa Al Thani assumed the emirate of Qatar on June 27, 1995. Relations between Cairo and Doha are divided into two stages — the first is before the January 25 revolution, where continuous tension prevailed with the Hosni Mubarak regime until a complete freeze and halt of visits. The second stage is the post-revolution period, which was accompanied by Doha’s support and strengthened by the Muslim Brotherhood’s arrival to power. Relations were severed again in 2017.​

In another sign of reconciliation, Egypt has freed Al-Jazeera journalist Mahmoud Hussein, a security source said Friday, after four years in jail without trial following the end last month of a rift between the two Arab states.

Hussein, an Egyptian national who had been imprisoned since December 23, 2016, was released on Thursday night, the Egyptian security source told AFP without elaborating.
But Gamal Eid, head of the Arab Network for Human Rights Information, said that while the decision to release Hussein had been taken, “he has still not returned home and is still being held.”

The 54-year-old was detained in Cairo when he returned for a family holiday, and was accused of incitement against state institutions and spreading false news.

Qatar’s Al-Jazeera – which has run a daily campaign calling for his liberation – did not immediately confirm his release. It has repeatedly said he was being held “without formal charges nor trial.”

“Releasing Hussein could indicate a sign of goodwill from Cairo to Al Jazeera that it wants a thaw in its relations with the news channel,” said King’s College London assistant professor Andreas Krieg.

“But overall this is more about polishing its terrible human rights record a bit vis-a-vis the (US President Joe) Biden administration,” he said.

El-Sisi’s government is regularly accused of crushing all forms of dissent and repressing political opponents.

Opposition in Egypt and The UAE’s r0le

Despite the reconciliation agreement reached on Jan. 5, Egyptian parliamentarians and other critics of normalization say Qatar has yet to meet the demands issued by the four countries, including cutting ties to Muslim Brotherhood figures and spreading “fake news” about Egypt on Qatari media channels.

Egyptian parliamentarians objected during a Jan. 26 parliament session to Egypt’s decision to reconcile with Qatar and restore Egyptian-Qatari relations in light of “ongoing attacks on Egypt.”

Ahmed Ismail, a member of the Defense and National Security Committee in the Egyptian parliament, told Al-Monitor, “Restoring relations is subject to Qatar’s commitment to the Egyptian demands by refraining from spreading false news on its channels, supporting terrorism and interfering in Egyptian affairs.”

Egyptian parliament member Nashwi al-Deeb told Al-Monitor, “Qatar’s interference in Egypt’s affairs and policies is rejected. The issue is not with the Qatari people; it is a dispute with the state administration because Qatar is used as a tool to strike Egypt,” in reference to Turkey.

Furthermore, many analysts have stated that the UAE, Egypt’s close ally, remains skeptical of Qatar, although it did sign the Ula declaration, in solidarity with Saudi Arabia.

Some therefore believe that the UAE is pressuring Egypt not to develop ties with Qatar at a fast rate. In one of the UAE’s latest planned investments in Egypt, a UAE-based developer has revealed plans to invest nearly $1 billion in the Egyptian real estate market over the next two years. Sky Abu Dhabi Real Estate Development, a subsidiary of Diamond Group, said the move is part of its expansion plan regionally and globally. The UAE is already financing many of Egypt’s grand infrastructure projects, including the new capital.