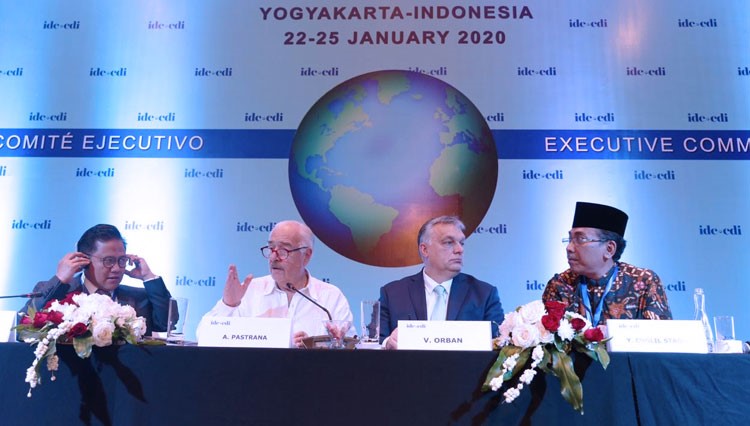 The Centrist Democrat International (CDI), in an attempt to counter the rise of civilizationalist states and leaders, has called for the creation of an alliance of nations, political parties and faith groups, that would seek to ensure that politics and international relations remain grounded in humanitarian values at a time of increasingly unimpeded violations of international law and human rights abuse.

CDI’s call carries weight given that it is the world’s largest coalition of almost 100 political parties from across the globe, including ruling parties in Europe, Latin America and elsewhere ranging from German Chancellor Angela Merkel’s Christian Democratic Union to Fidesz, the party of Hungarian Prime Minister Victor Orban, a professed illiberal who envisions his country as a Christian nation.

The call takes on added significance because it was issued by a group that traces its roots to European and Latin American Christian democracy at a meeting in Indonesia, the world’s third largest democracy and its most populous majority Muslim country, hosted by the largest Indonesian Islamic political party, the National Awakening Party (PKB).

PKB, founded by Nahdlatul Ulama (NU), the world’s largest Muslim organization, joined CDI little over a year ago as part of the International’s effort to expand its reach beyond Christian democracy and NU’s advocacy of a humanitarian interpretation of Islam that encourages cooperation across political, ethnic and religious divides on the basis of a shared respect for human rights and international law.

The resolution adopted at this week’s CDI executive committee meeting in Yogyakarta, comes at a moment that Fidesz’s membership in the European People’s Party (EPP), a CDI affiliate, hangs in the balance.

Fidesz was suspended from the EPP political family last March over rule-of-law concerns, though the party’s 13 deputies remain part of the EPP group within the European parliament.

Mr. Orban and Fidesz stand accused of undermining pluralism in Hungary and removing the country’s checks and balances by stacking the Constitutional Court with loyalists; reshaping the electoral system to favour the party; placing dozens of watchdog institutions, including the judiciary and prosecution service, under the leadership of their allies; and effectively eroding independent media.

Although a divorce with EPP is likely, Fidesz is expected to remain a member of CDI, prompting questions what the group means with its warning about civilizationalist leaders and states.

Mr. Orban was among prominent figures, including former heads of state and government, who attended the CDI meeting in Yogyakarta and voted unanimously in favour of the resolution.

Yet, at a news conference immediately after the meeting, Mr. Orban insisted that Hungary was “a Christian nation” and that Christianity had to inform all aspects of Hungarian society. He spoke of living “side by side” rather than with Muslims.

The CDI resolution came in response to what it described as the “emergence of authoritarian, civilizationalist states that do not accept the rules-based post-WWII (World War Two) order, whether in terms of human rights, rule of law, democracy or respect for international borders and the sovereignty of other nations.”

The resolution was designed to counter “authoritarian regimes’ blatant disregard for the fundamental rights articulated in UDHR” (United Declaration of Human Rights) and re-introduce “moral and ethical values” into public policy, economics and politics.

The resolution puts flesh on a skeleton that has fallen by the wayside in the battle to shape a new world order.

Its significance lies in the fact that it re-introduces the battle of ideas into a global power struggle that has largely been reduced to geopolitics, geo-economics, big and regional power rivalry and replacement of adherence to international law with the principle of might is right.

Equally importantly, it offers an antidote to the rise of civilisationalism and the civilizational state that seeks its legitimacy in a distinct civilization rather than the nation state’s concept of territorial integrity, language and citizenry.

The trend towards civilisationalism feeds off the politicization of history. It benefits from the fact that 21st century autocracy and authoritarianism vests survival not only in repression of dissent and the limiting or denial of freedom of expression.

It creates the basis for an unspoken consensus on values and principles of governance that are illiberal at best and that would underwrite a new world order on which men like Mr. Orban, China’s Xi Jinping, Russia’s Vladimir Putin, Turkey’s Recep Tayyip Erdogan, Saudi Arabia’s Mohammed bin Salman, India’s Narendra Modi, the Philippines’ Rodrigo Duterte and US president Donald Trump find a degree of common ground.

Civilisationalism is frequently based on myths erected on a falsification and rewriting of history to serve the autocrat or authoritarian’s purpose. Men like Messrs. Trump, Orban, and Erdogan project themselves as nationalist heroes who protect the nation from some invading horde.

In the final analysis, the CDI resolution constitutes a call for a continuous and robust discussion of what the principle of moral and ethical values means and how they are translated into law and policy.

For CDI and Mr. Orban, the litmus test will be how they move from fudging definitions to determining whether they can find common ground on translating words into deeds.