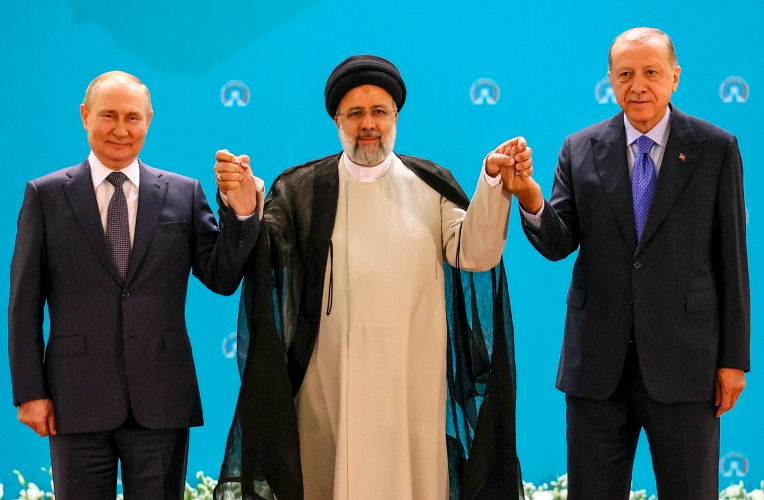 Turkish president Recep Tayyip Erdogan announced a planned military operation into Syria against the YPG/PKK last month, he stated that “We will clean up Tal Rifaat and Manbij,” two key northern Syrian cities currently held by the SDF.

The decreased presence of Russian forces in Tal Rifaat – which was the second-largest military presence in the area – makes Türkiye’s plans easier. Russia is finding it hard to resupply its troops in Tal Rifaat and has already abandoned some of its bases near Aleppo to Iranians, due to the strains on its military as a result of the war in Ukraine.

Amid that withdrawal, the Iranian militias in the area would be a primary threat as they don’t want [Turkish-backed] Syrian rebel forces to have a presence near Aleppo. As for the Syrian military forces fighting under the regime of Bashar al-Assad, the source said that Ankara does not expect them to pose a threat or attempt to repel a Turkish offensive.

Oytun Orhan, coordinator of Syria studies at the ORSAM think tank in Ankara, said that Russia’s failure to back the operation remains its major obstacle.

“Ankara decided to launch a military offensive on Syria while the world’s attention is focused on the war in Ukraine — and after thousands of Russian troops withdrew from Ukraine. However, Russia cannot risk looking weak in both Ukraine or Syria by giving the greenlight to a Turkish operation now,” he told Arab News.

Orhan noted that Türkiye only hit targets along the Turkish-Syrian border as retaliation against attacks by the YPG.

“I don’t expect a larger-scale operation in which the Syrian National Army would serve as ground forces and the Turkish military would give aerial support,” he said.

Ankara has previously conducted three military operations in the area: Euphrates Shield in 2016, Olive Branch in 2018, and Peace Spring in 2019.

Troop numbers from both Russia and the Syrian regime have been increasing in northern Syria since early June ahead of a potential Turkish operation.

US officials have expressed concern over Türkiye’s reported preparations for a new military offensive in Syria, warning that such an attempt would endanger the US forces in the region and undermine the fight against ISIS.

Putin met with his Turkish and Iranian counterparts in Tehran on Tuesday ostensibly to discuss Syria, but talks also turned to grain shipments and the Ukraine war.

On his first foreign trip outside the former Soviet Union since the invasion, Russia’s president received endorsement for the Ukraine war, with Iran’s Supreme Leader claiming NATO would have eventually started the conflict.

He also supported Putin’s aims in Ukraine, with the Iranian Supreme Leader Ali Khamenei saying at the trilateral summit that the West opposes an “independent and strong” Russia.

Khamenei echoed past claims by Putin that NATO — which he called a “dangerous creature” — would have eventually attacked Russia.

“NATO would know no bounds if the way was open to it, and if it was not stopped in Ukraine, it would start the same war using Crimea as an excuse,” he was quoted as saying on his website after meeting with Putin in Tehran.

Erdogan has sought to help broker talks on a peaceful settlement of the Russia-Ukraine war, as well as help negotiations to unblock Ukrainian grain through the Black Sea.

Türkiye has found itself on the opposing side to Russia in conflicts in Azerbaijan, Libya and Syria and has even sold lethal drones to Ukrainian forces. But the NATO member has not imposed sanctions on the Kremlin and remains a key potential partner for Moscow.

“A trusting dialogue has developed between them on the most important issues on the bilateral and international agenda. On most issues, our positions are close or identical.”

Putin on Tuesday praised his talks with the presidents of Iran and Türkiye. Putin said the Syria summit in Tehran had been “truly useful and rather substantial”, describing the atmosphere as “business-like and constructive”.

He said the three leaders adopted a joint declaration, pledging to strengthen cooperation in the interests of the “normalisation” of the situation in Syria.

Despite Iran and Russia’s attempts at convincing Türkiye to shift their stance regarding the Syria operation, Erdogan appeared to hold his ground and maintained (or even strengthened) his stance on the topic, even urging Russia and Iran to support the potential operation.

Erdogan says his country’s plan for a new military offensive in neighbouring Syria will remain on the agenda until its security concerns are addressed.

Speaking to reporters on his return flight late on Tuesday, Erdogan said the three countries were united in counterterrorism efforts despite having different views on some Syria-related issues, adding that he believes all three think alike regarding the YPG.

He also said the United States must withdraw from the east of the Euphrates river and halt its support for “terrorist” groups.

“America has to leave east of the Euphrates now. This is an outcome that came out of the Astana process,” Erdogan was quoted as saying by the state-run Anadolu Agency, referring to the trilateral talks launched in 2017 by Turkey, Russia and Iran to pursue a political solution to Syria’s conflict.

“Turkey expects this as well because it is America that feeds the terrorist groups there,” Erdogan told reporters.

Türkiye wants more help from Russia and Iran but is capable of continuing its fight against “terrorist” organisations in Syria without needing any support, Erdogan said on Tuesday, reiterating his plan to establish a 30km (18.5 miles) so-called “safe zone” from Türkiye’s southern border with Syria.

“You say you understand Turkey’s concerns and we thank you for this,” Erdogan said, addressing Putin and Raisi. “But words alone are not enough.”

Earlier, Iran’s Supreme Leader Ayatollah Ali Khamenei warned against such an operation and the Kremlin has previously shown opposition to a new Turkish incursion.

Both Putin and Raisi voiced their support for the Astana format as effective in reducing violence and raising hopes for a diplomatic solution in Syria. They expressed opposition to foreign intervention and the theft of the country’s oil and resources – a jab aimed at the United States.

It is clear that Türkiye intends to go ahead with the operation, and although Russia and Iran will most definitely not support the offensive, there is a growing chance that Russia will not intervene or try to prevent it militarily.