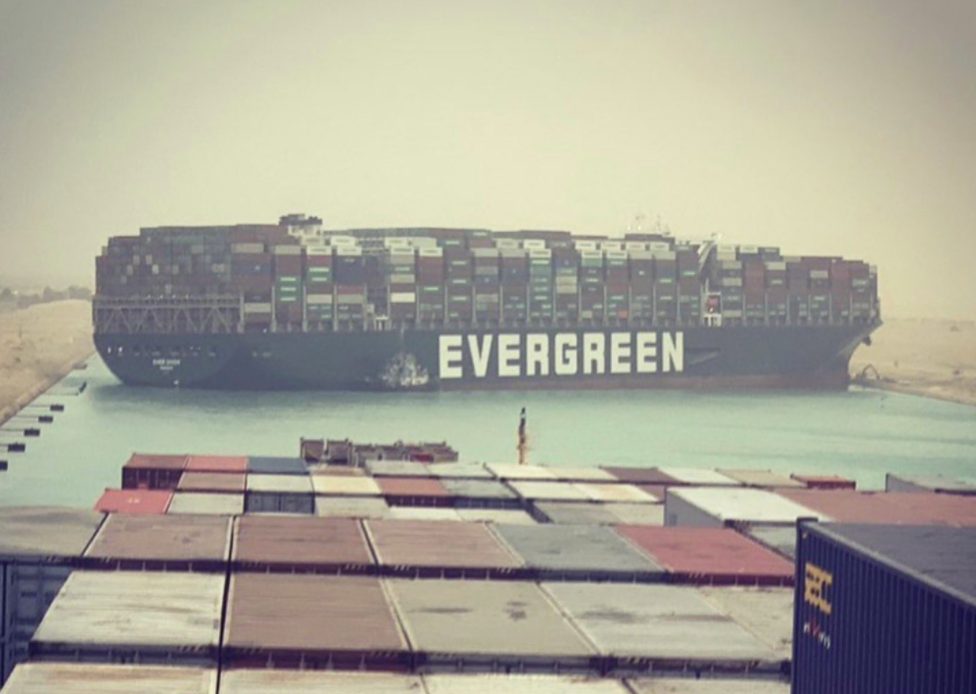 Traffic on the narrow waterway dividing continental Africa from the Sinai Peninsula stopped Tuesday after the MV Ever Given, a Panama-flagged container ship with an owner listed in Japan, got stuck.

It wasn’t immediately clear what caused the Ever Given to turn sideways in the canal. GAC, a global shipping and logistics company, described the Ever Given as suffering “a blackout while transiting in a northerly direction,” without elaborating.

The Ever Given’s bow was touching the canal’s eastern wall, while its stern looked lodged against its western wall, according to satellite data from MarineTraffic.com. Several tug boats surrounded the ship, likely attempting to push it the right way, the data showed.

Cargo ships and oil tankers appeared to be lining up at the southern end of the Suez Canal, waiting to be able to pass through the waterway to the Mediterranean Sea, according to MarineTraffic data.

A United Nations database listed the Ever Gren as being owned by Shoei Kisen KK, a ship-leasing firm based in Imabari, Japan. The firm could not be immediately reached for comment Wednesday. The ship had listed its destination as Rotterdam in the Netherlands prior to getting stuck in the canal.

Opened in 1869, the Suez Canal provides a crucial link for oil, natural gas and cargo being shipping from East to West. Around 10 per cent of the world’s trade flows through the waterway and it remains one of Egypt’s top foreign currency earners. In 2015, the government of President Abdel-Fattah el-Sissi completed a major expansion of the canal, allowing it to accommodate the world’s largest vessels.

The blockage of the Suez Canal by a giant container vessel is likely to send a ripple of disruption through the global energy supply chain.

European and US refiners that rely on the vital waterway for cargoes of Mideast oil may be forced to look for replacement supplies should the blockage persist, potentially boosting prices of alternative grades. At the same time, flows of crude from North Sea fields destined for Asia will be held up.

The world’s busiest maritime trade route has been thrown into turmoil after the container ship ran aground on Tuesday, blocking traffic in both directions. While the vessel is only likely to remain stuck for a couple of days, that’ll be long enough to scramble some energy flows, creating an extra headache for refiners, traders and producers already coping with the pandemic’s fallout.

“There are plenty of alternative trades for European importers to avoid the Suez Canal,” said Ralph Leszczynski, head of research at shipbroker Banchero Costa & Co.

Buyers in Europe and the US may now look to other regions, including the US Gulf, North Sea, Russia and West Africa, according to shipbrokers. Varieties including Mars Blend from the US Gulf, Urals from Russia, and even Asian and Russian Far East grades are likely to get a boost as a result of any increased demand, an analyst and one of the shipbrokers said.

On a daily basis, about 600,000 barrels of crude or less flow from the Middle East to Europe and the US via the canal, while volumes from the Atlantic Basin to Asia total about 850,000 barrels a day, according to Anoop Singh, head of East of Suez tanker research at Braemar ACM Shipbroking Pte.

Vessel charterers or owners who are unwilling to wait for the blockage to clear can opt to sail around South Africa, although that’s a much longer route that would take more time and boost costs. An ocean voyage from the Arabian Gulf to London takes 10 more days via the Cape of Good Hope than the canal, according to an online presentation from the World Shipping Council.

Oil analytics firm Vortexa said 10 tankers carrying 13 million barrels of crude could be affected. Oil prices rose more than 2 percent. Five LNG tankers were blocked, according to data intelligence firm Kpler. Of the five, three were bound for Asia and two for Europe, said Kpler analyst Rebecca Chia. She said that if the congestion persisted until the end of this week, it would affect the transit of 15 LNG tankers.

“It increases the risk that we might see additional port congestion in European ports in the next week,” said Lars Jensen, chief executive at SeaIntelligence Consulting.

About 30 percent of global container ship traffic and 12 percent of world trade by volume passes through the canal each day, carrying everything from fuel to consumer goods, and it is a major source of hard currency for Egypt.

Osama Rabie, chairman of the Suez Canal Authority, said the authority was trying to keep traffic flowing between waiting areas as best it could while refloating efforts continued. “Once we get this boat out, then that’s it, things will go back to normal. God willing, we’ll be done today,” he said.

Many analysts expected oil prices to rise as a result.

Despite the initial worries, it appears that the effects have not been as catastrophic as predicted, and the ship has been refloated.

The giant container ship that has been blocking the Suez Canal for more than a day has been partially refloated and traffic along the fastest shipping route from Europe to Asia is expected to resume soon, port agent GAC said on Wednesday.

This has occurred earlier than expected, as many analysts believed that the process would take several days.

In addition to this, Oil prices fell more than 1 percent as fresh coronavirus lockdowns revived worries about demand for oil products, even as tug boats struggled to move a stranded container ship blocking crude oil carriers in the Suez Canal.

Brent crude futures slid 87 cents, or 1.4 percent, to $63.54 a barrel early Thursday, after jumping 6 percent overnight.
US West Texas Intermediate (WTI) crude futures dropped by $1.02, or 1.7 percent, to $60.16 a barrel, after climbing 5.9 percent overnight.
Prices, which tumbled earlier in the week on worries about tighter pandemic curbs in Europe and vaccine delays stalling fuel demand growth, sharply reversed on Wednesday on news of the grounding in the Suez Canal, potentially blocking 10 tankers carrying 13 million barrels of oil.

The feared rapid increase of oil prices, did not occur, due to external factors like the ongoing pandemic concerns. Now, with the ship finally being moved and traffic soon to resume, it appears that Oil prices will not increase any further, and world trade will resume as normal, suffering limited effects.