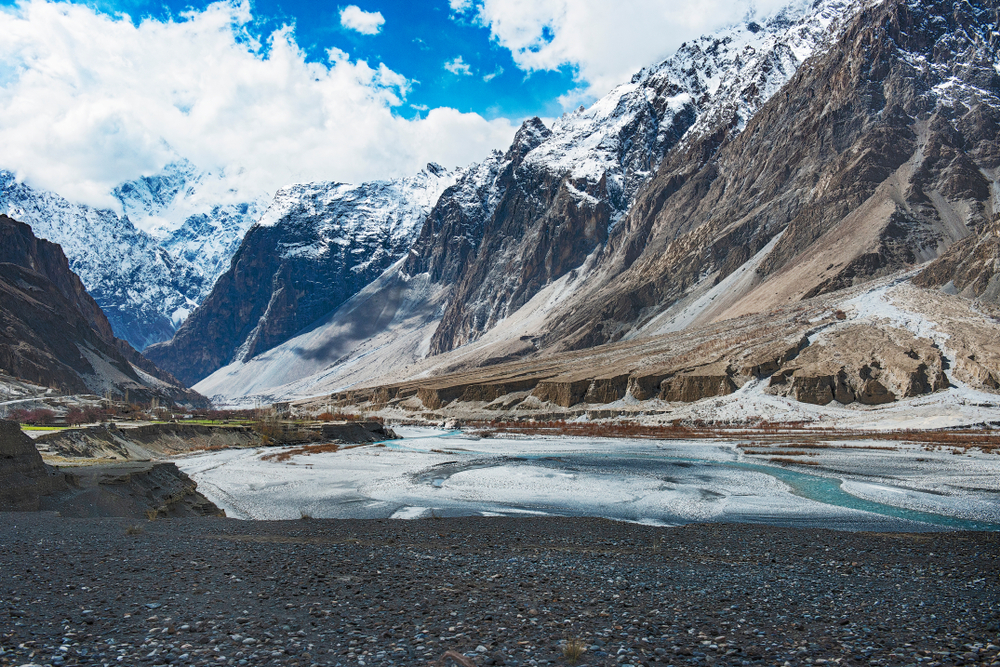 China has once again began to show its strong relationship with and direct influence in Pakistani affairs, particularly in its infrastructure projects. Prime Minister Imran Khan last week vowed to build the “biggest dam in Pakistan’s history” after he inaugurated the construction of the Diamer-Bhasha Dam in the Gilgit-Baltistan region. He said the project will benefit the people living in the area. The controversial dam is being built jointly by a Chinese state-run firm, China Power, and the Frontier Works Organization (FWO) of the Pakistani military, according to media reports. “The decision to build this dam was taken 50 years ago. There can be no better site for constructing a dam; it is a natural dam,” the premier said.

A number of other hydropower projects are also underway in the area, with Kohala and Neelum Jhelum projects being the most contentious ones. The former is still under construction while the latter was completed more than a year ago.

“This is no ordinary project. There is a reason why both Pakistan’s prime minister and the army chief were present at the site for the project launch. It will have an impact on Pakistan’s economy, security and politics,” said Ahmed Quraishi, a senior fellow at Project Pakistan 21, an independent research organization based in national capital Islamabad. Pakistan has been facing a power crunch for some years. In effect, there is significant electricity load shedding being implemented across the country in both urban and rural areas. The shortages have led to many factory closures and discouraged foreign investment in the country, resulting in lower employment, economic output and exports.

“We are grateful to our all-weather friend China for its support in the construction of the mega project,” said Faisal Vawda, the water resources minister. Quraishi said the technical specifications of the project suggest it will be something that engineers worldwide will be studying due to the region’s terrain. “China’s experience in the dam construction is unparalleled,” he said.

Shaukat Basra, a spokesperson for Pakistani’s Punjab province, said the dam will prove to be a backbone of Pakistan’s power generation.

“Power China is a part of the dam construction. It will be built keeping in view the international standards. They have already constructed Port Qasim Power Plant in Karachi, which has turned the port city of Karachi into a ‘city of lights’,” he said. “I am glad to know Chinese companies have started construction of the dam. Kudos to China-Pakistan friendship,” he added.

Opposition to the move in Pakistan

Despite the seemingly positive implications of the latest move on Pakistan’s power generation, the public’s growing dissatisfaction has triggered mass protests and destruction of public property time and again. Still, the problem is expected to worsen in the coming years as the mismatch between energy supply and demand in the country is projected to widen.

But why are the public and local residents furious with this move? ANI reported the protesters in PoK highlighted environmental impact of the dams being built by Pakistan and China in the region. “The protesters asked under which law is the river agreement of disputed region signed between Pakistan and China? They said that Pakistan and China are violating UN Security Council resolutions by occupying rivers,” ANI reported. China’s Three Gorges Corporation had won rights to build the Kohala project in 2015. However, progress has been slow.

However, there are further reasons for being skeptical of the project and Pakistan’s benefit from it. Earlier, it was a part of the China Pakistan Economic Corridor (CPEC) project but the tough conditions, particularly regarding the transfer of ownership, were unacceptable and not “doable” for Pakistan. Afterwards, the Pakistani government tried to raise money for the DBD along with the Mohmand dam through crowdfunding. However, Pakistan then re-entered into a deal with the Chinese firm. Under the new terms of the deal, China Power will hold 70% of the share while the remaining 30% will be with Frontier Works Organisation  a commercial arm of the Armed Forces of Pakistan. Despite this, The DBD’s construction is expected to create about 16,500 jobs. Once in operation, it will irrigate around 1.23 million acres of agriculture land and generate 18.1 billion units of electricity annually.

The second project the Chinese are constructing in Pakistan is at Kohala. It was listed under the China Pakistan Economic Corridor since August 2014. The Kohala project is on the Jhelum river on the Pakistani-administered side of Kashmir which India claims is illegally occupied territory since 1947-48. This 1,124-Megawatt project was to be developed by the Kohala Hydropower Company Private Limited. Disputes over this project took place in 2019 between Pakistan and China, which they tried to resolve but the Chinese firm refused to accept the dispute resolution plan approved by the government of Pakistan. One of the major issues Pakistan had with the Chinese developer of the Kohala project was water flows and the release of water into the environment. This was resolved after the Economic Coordination Committee approved an additional release in Jhelum below Kohala dam. Another issue related to foreign exchange. Due to such reasons work obstacles were created over Kohala project. On June 25, 2020, a “tripartite” agreement for implementing the Kohala project was signed between the China Three Gorges Corporation, the government of Pakistan-occupied Kashmir (PoK) and Private Power and Infrastructure Board. The project is likely to cost USD 2.4 billion. International Finance Corporation and Silk Road Fund are also sponsors of this project.

The third hydropower project agreed upon between Pakistan and China was in July 2020 and is at Azad Pattan. It is located on the River Jhelum near the village of Muslimabad in the district of Sudhnoti, in Pakistan-occupied Kashmir (PoK). This will be carried out by the Power Universal Company Limited which is owned and controlled by the China Gezhouba group.

For the government of Pakistan, both the Kohala and the Azad Pattan projects are likely to bring about USD 4 billion in the form of investments, produce around 1800 MW of hydel power and create 8,000 jobs. However, projects such as DBD face opposition from people in Sindh and Gilgit Baltistan. A number of people in Sindh have questioned thee “feasibility, tenability and profitability of the dam”. In Gilgit Baltistan, it is believed that most of the infrastructural benefits have been reaped by Bhasha in Khyber Pakhtunkhwa, while the water runs through Diamer.

Furthermore, in the long term, such investments in the hydro sector will increase Pakistan’s debt. According to 2019-20 Economic Survey of Pakistan, Pakistan’s total public debt increased by 7.6% in this fiscal year. Total public debt recorded at the end of March 2020 was 35, 207 billion (USD 21.03 billion)Pakistani Rupees. Different from the public debt is the money Pakistan has to pay on loan in the form of investments.

The revival of Belt and Road in Pakistan

The latest dam investments are a part of a recent revival of the Belt and Road project in Pakistan. China’s Belt and Road program has found new life in Pakistan with $11 billion worth of projects signed in the last month, driven by a former lieutenant general who has reinvigorated the infrastructure plan that’s been languishing since Prime Minister Imran Khan took office two years ago.

As part of the China-Pakistan Economic Corridor (CPEC), the nations signed deals on June 25 and July 6 for two hydro-power generation projects in disputed Kashmir worth $3.9 billion. A separate $7.2 billion deal plans to overhaul Pakistan’s colonial-era railways, in what is the most expensive Chinese project in Pakistan to date. Khan’s government appointed Asim Saleem Bajwa last year to run the China-Pakistan Economic Corridor Authority, which oversees more than $70 billion in projects from power plants to highways. He also joined Khan’s cabinet in late April, becoming one of more than a dozen former and current military officials in prominent government roles as the army expands its influence in the country.

CPEC, China’s 15-year $62 billion investment in Pakistan, is seen as the economic lynchpin in a wider strategic relationship between the two countries, with the goal of transforming Pakistan into a prosperous regional trade hub. Since Chinese President Xi Jinping launched the initiative in 2013, the World Bank estimates about $575 billion worth of energy plants, railways, roads, ports and other projects have been built or are in the works across the globe. Its progress has slowed recently, dogged by accusations that China is luring poor countries into debt traps for its own political and strategic gain.

The flurry of deals come after a long period of tepid activity since Pakistani prime minister Imran Khan ascended to power in 2018. It was understood that Khan’s government had sought a reset of CPEC, which was seen as closely aligned with the previous regime. Through the CPEC, Islamabad seeks to leverage Chinese capital, production capacity, and know-how in order to upgrade Pakistan’s infrastructure and build a mechanism for sustainable economic growth. In return, Beijing acquires a connection to the Arabian Sea, offering a contingency trade route to the risk-prone Malacca Strait in Southeast Asia.

In a tweet last month, Bajwa said some detractors had given the “false impression” that CPEC had been slowed. Not only has the pace of work on projects picked up recently, but a great deal of ground work has been done to launch phase two of the project that also includes special economic zones to lure Chinese manufacturers, agriculture, science, technology and tourism, he wrote.”The prime minister pushed very hard on this,” said Abdul Razak Dawood, Khan’s adviser on commerce and investments said by phone. “We feel that we have to get more and more hydro in our energy mix.”

Pakistan’s army is already responsible for securing every single Beijing-funded project scattered across the country, from the mountains near the Chinese border to the desert in Gwadar where the Chinese operate a port. Its role has become even more important following terrorist attacks on three Chinese-related projects in the past year.

there’s deepening concerns over Islamabad’s ability to service its debts under the program. The Center for Global Development has listed Pakistan among eight nations that face potential debt-sustainability problems because of the initiative. The country must repay China more than double the amount it owes the International Monetary Fund over the next three years, according to an IMF report last year. It is therefore clear that although the Belt and Road initiative will improve Pakistan’s infrastructure in the short term, it could lead to major economic problems in the future, and an increasing  geopolitical reliance on China which we have already seen signs of.