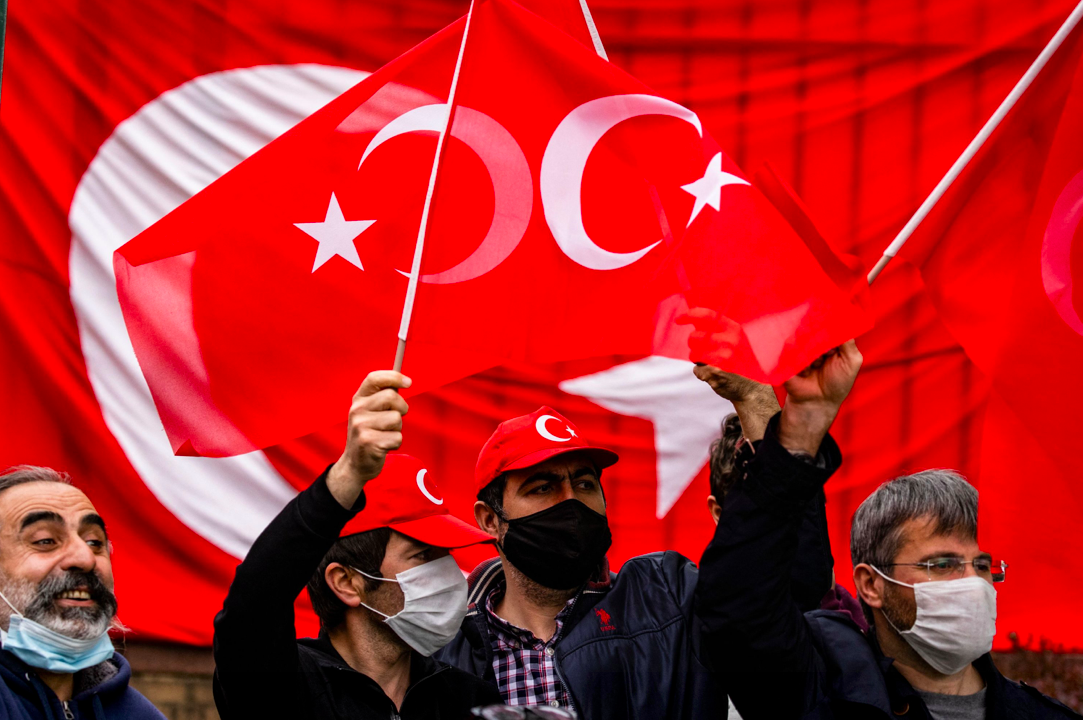 The United States recognizes the 1915 massacre of as many as 1.5 million Armenians by the Ottoman Empire as genocide, President Joe Biden said in a statement on Saturday.

The announcement came on the day that Armenians worldwide mark Genocide Remembrance Day.

“We remember the lives of all those who died in the Ottoman-era Armenian genocide and recommit ourselves to preventing such an atrocity from ever again occurring,” said Biden.

“And we remember, so that we remain ever-vigilant against the corrosive influence of hate in all its forms … The American people honor all those Armenians who perished in the genocide that began 106 years ago today … We affirm the history. We do this not to cast blame but to ensure that what happened is never repeated,” he added.

U.S. presidents have been reluctant to use the word genocide — a powerful, particular term invented in 1944 after the Holocaust by Raphael Lemkin, a Polish-Jewish lawyer who moved to the U.S. two years before.

The United State Holocaust Memorial Museum defines genocide as “an internationally recognized crime where acts are committed with the intent to destroy, in whole or in part, a national, ethnic, racial, or religious group.”

The House and Senate approved resolutions in 2019 referencing the Armenian genocide. State lawmakers in the Illinois General Assembly members affirmed the genocide in resolutions passed six years ago. Last month, Gov. J.B. Pritzker issued a proclamation underscoring that teaching about the Armenian genocide is part of the mission of state-mandated Holocaust education.

Minutes after Biden’s declaration, Turkey responded by saying it “entirely” rejects the label. Later Saturday, Turkey’s Foreign Ministry said it had summoned the US ambassador to Turkey to convey Ankara’s “rejection” of the genocide designation.

“We have nothing to learn from anybody on our own past. Political opportunism is the greatest betrayal to peace and justice,” Turkish Foreign Minister Mevlut Cavusoglu said on Twitter. “We entirely reject this statement based solely on populism.”

“We strongly condemn and reject the US president’s remarks, which only repeat the accusations of those whose sole agenda is enmity towards our country,” Kalin said. “We advise the US President to look at (his country’s) own past and present.”

Biden’s declaration fulfilled a campaign pledge to describe the killings as a deliberate attempt to wipe out the Armenian people.

But the move could spell problems for US ties with the Turkish government, which is a member of the NATO military alliance.

Faik Oztrak, a spokesman for the main opposition Republican People’s Party, sided with the government in hitting out at the statement made by the White House.

He was quoted by the Reuters news agency as saying that the move “will open wounds that will be difficult to repair not only on US-Turkey ties but also on a potential compromise between the people of Armenia and Turkey.”

One of the strongest reactions from Turkey came from Armenian Patriarch Şahak Maşalyan, who slammed the use of the 1915 events as a political tool.

Maşalyan criticized the sorrow of the Armenian community being used as a political tool by third parties, underlining that such actions prevent Turkish and Armenian societies from moving on or building fresh relations.

Speaking to Anadolu Agency (AA), Maşalyan expressed the importance of building bridges of friendship and sincerity between Turkish and Armenian people in order to have a clear understanding and evaluation of the historical events.

“It is desired that third party countries provide encouraging contributions to these aims,” he stated and added that governments for decades have used the 1915 events in their agendas, which only causes further tension and serves no solid positive contribution.

Turkey’s Jewish community also released a statement regarding Turkey’s call for a joint history commission. “As we commemorate the lives lost at the great tragedy that befall Ottoman Armenians during the events of World War I – we join the call of Patriarch Maşalyan to refrain from politicizing tragedies and support President Erdoğan’s call for a joint historical committee,” the official Twitter account of Turkey’s Chief Rabbinate said.

U.S. Ambassador to Ankara David Satterfield has also been summoned to the Foreign Ministry over Biden’s statement, which recognized the so-called “Armenian genocide” and even unrelatedly deadnamed Istanbul, referring to the city as “Constantinople.”

A statement from the ministry said that Ankara’s strong reaction was expressed to the envoy by Deputy Foreign Minister Sedat Önal.

Turkey’s allies also condemned the decision. The first criticism came from Azerbaijani President Ilham Aliyev on Saturday, who called the decision “unacceptable” and a “historical mistake.”

Aliyev and his Turkish counterpart Recep Tayyip Erdoğan condemned Biden’s move during a phone call, the Azerbaijani Presidency said in a statement.

The Azerbaijani leader said the U.S. president’s remarks would “seriously damage cooperation in the region,” stressing that Baku will always stand by Ankara.

“The falsification of history, attempts to “rewrite history” and its use for political pressure are unacceptable,” Azerbaijan’s foreign ministry also said in a statement on Saturday.

“I am very saddened by the statement of the U.S. President regarding the events of 1915, which clearly bears political motivations at the expense of historical facts and damaging the hopes of cooperation and stability in the region,” Secretary-General Baghdad Amreyev said in a written statement on Saturday.

This statement by Biden will certainly have a very negative impact on US-Turkey relations, and if attempts for reconciliation are not made, could spell the end of the US-Turkey strategic relations, especially considering Biden’s sidelining of Turkey in his foreign policy.

Former President Barack Obama promised, but never delivered on calling the killings genocide, unwilling to antagonize Turkey — a nation born out of the Ottoman Empire — which has denied that what took place was genocide.

Ex-President Donald Trump was close to Turkish President Recep Tayyip Erdogan and continued the U.S. government policy of not recognizing the murders as genocide in order to not alienate Turkey, a NATO ally.

Biden was the first president to say the systematic atrocities suffered by Armenians was genocide, and he did so on Armenian Remembrance Day.

Reuters reported on Sunday that Erdogan’s spokesman, Ibrahim Kalin, said calling the deaths of Armenians at the hands of the Ottoman Empire a genocide is “simply outrageous” and the U.S. should expect “there will be a reaction of different forms and kinds and degrees.”

The Turkish foreign ministry later summoned U.S. Ambassador David Satterfield to convey the country’s reaction, stating that Biden’s decision caused “a wound in relations that is difficult to repair,” according to the Anadolu state news agency.

A foreign ministry statement said Biden’s announcement was a “grave mistake” that “undermines our mutual trust and friendship.”

Furthermore, the decision comes among continuing tensions in the region. Armenia’s Prime Minister Nikol Pashinyan announced today that he was resigning to clear the way for new parliamentary elections. He has been facing calls for months from army officers to step down over defeat in last year’s war with Azerbaijan.

US-relations had already been deeply strained even under the Trump administration, due to the suspension of Turkey from the F-35 program, in reaction to Turkey buying S-400s from Russia.  Furthermore, Biden has appeared to ignore Turkey in his foreign policy after fairly positive ties between Erdogan and Trump. Biden’s historic announcement accusing the Ottomans of genocide will certainly be a big blow in these relations, a blow that it will be hard to recover from. We could be seeing a new era of hostility between supposed allies Turkey and the US.