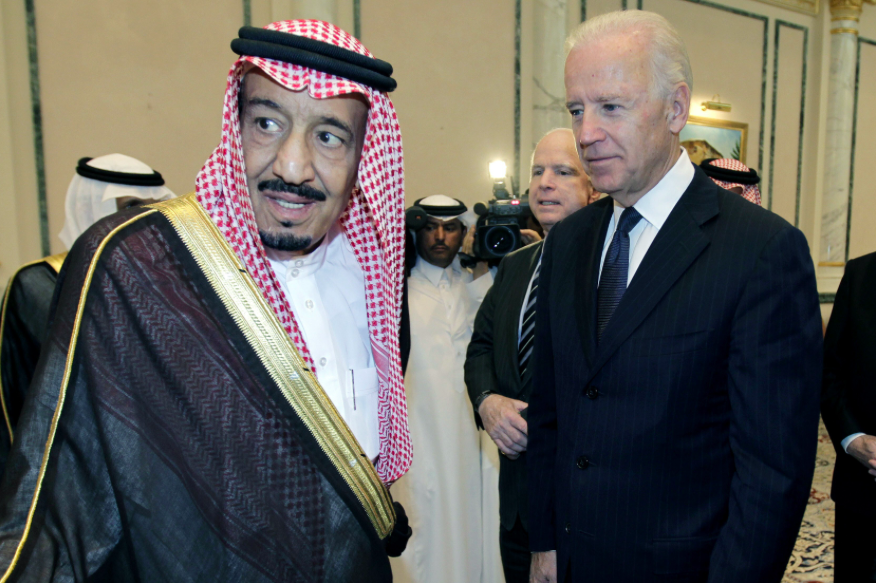 US President Joe Biden held his first call with Saudi King Salman on Thursday, emphasizing human rights and diplomatic efforts to end the war in Yemen as the White House scrutinizes relations with the oil-rich kingdom.

Biden noted the recent release of women’s rights activist Loujain al-Hathloul and several Saudi American activists from prison and “affirmed the importance the United States places on universal human rights and the rule of law,” according to a readout of the conversation released by the White House.

Secretary of State Antony Blinken also held a phone call with Saudi Foreign Minister Faisal bin Farhan Al Saud on Thursday, in which he emphasized the importance of Saudi progress on human rights.

The White House has already downgraded relations with 35-year-old Crown Prince Mohammed, who has been the public face of the Saudi kingdom since becoming crown prince in 2017. The administration has made clear that Biden views the aging King Salman as his counterpart and will conduct relations through him.

Biden and Salman discussed regional security and other issues and that the new US president told the Saudi monarch that “he would work to make the bilateral relationship as strong and transparent as possible”, the White House said.

“The two leaders affirmed the historic nature of the relationship,” the White House said in a statement. It did not mention the Khashoggi report, a test of the decades-long close ties between the allies as they try working together to confront growing Iranian influence in the Middle East.

Biden later told reporters the call, their first since he took office last month, was “good”.

“Our administration is focused on recalibrating the relationship,” White House spokeswoman Jen Psaki told an earlier briefing. “And certainly there are areas where we will express concerns and leave open the option of accountability.”

“There are also areas where we will continue to work with Saudi Arabia given the threats they face in the region,” she added in an apparent reference to Saudi Arabia’s main rival and US foe, Iran.

However there are strong doubts regarding the future of US-Saudi relations, as will be discussed below.

The US set to release Khashoggi report

Biden’s discussion with Salman comes as Washington and Riyadh prepare for the release of a U.S. intelligence assessment that will reportedly implicate the king’s son, Saudi Crown Prince Mohammed bin Salman, in the brutal killing of journalist Jamal Khashoggi.

A U.S. resident and Saudi citizen who worked as a Washington Post columnist, Khashoggi was killed in the Saudi Consulate in Istanbul in October 2018 and his body was dismembered. Riyadh initially denied any involvement in the killing but later blamed Khashoggi’s death on a rogue operation.

His murder sent shockwaves around the world and spurred demands from human rights advocates, press freedom organisations, UN experts and legislators for the perpetrators to be held accountable.

Analysts believe that the Biden administration’s decision to release the intelligence assessment on who is responsible for Khashoggi’s killing, which the Trump administration declined to do, signals a shift in U.S.-Saudi relations.

White House Press Secretary Jen Psaki told reporters on Wednesday the Biden administration remains committed to releasing the DNI report. She did not give a specific timeframe for its release, saying only it would be “soon”.

Biden told reporters he has read the report, ahead of the call he had with King Salman. Earlier this week, news outlet Axios said the report which is widely believed to provide more details on the alleged role of bin Salman, also known as MBS, in Khashoggi’s murder  could be out as early as Thursday.

Saudi officials have repeatedly rejected accusations MBS was involved in Khashoggi’s killing, instead blaming the murder on a group of rogue operatives.

In an interview with broadcaster CBS’s programme 60 Minutes in 2019, the crown prince was asked if he ordered Khashoggi’s murder. “Absolutely not,” he answered, adding however that he said he took “full responsibility” as a Saudi leader for the “heinous crime”.

The officials say that the report, for which the CIA was the main contributor, assessed that the crown prince approved and likely ordered the murder of Khashoggi, whose Washington Post column had criticized the crown prince’s policies.

Such a result would seriously endanger US-Saudi relations, as on one hand, the US would increase pressure on the Saudi government to take accountability for the crime, and on the other, Saudi Arabia will take offense to the accusation, increasing hostility towards the US.

Biden’s new director of national intelligence, Avril Haines, committed at her confirmation hearing to complying with a provision in a 2019 defense bill that required the Office of the Director of National Intelligence to release within 30 days a declassified report on Khashoggi’s murder.

Biden’s stance on the Yemen war

Another negative sign for the upcoming trajectory of US-Saudi relations is Biden’s stance on the Yemen war and the Houthi rebels.

Two weeks ago, the Biden administration announced that it was reversing the Trump administration’s decision to name the Yemeni Houthis (formally, Ansar Allah) a Foreign Terrorist Organization (FTO) and a Specially Designated Global Terrorist group.

And then, two days later, came this statement from the State Department:

“As the President is taking steps to end the war in Yemen and Saudi Arabia has endorsed a negotiated settlement, the United States is deeply troubled by continued Houthi attacks.  We call on the Houthis to immediately cease attacks impacting civilian areas inside Saudi Arabia and to halt any new military offensives inside Yemen, which only bring more suffering to the Yemeni people.  We urge the Houthis to refrain from destabilizing actions and demonstrate their commitment to constructively engage in UN Special Envoy Griffiths’ efforts to achieve peace.  The time is now to find an end to this conflict.”

Many have pointed out  a very clear contradiction here. What do we usually call attacks on civilians, of the sort that led to this State Department rebuke?  Terrorism. Biden’s decision not to designate the Houthis as a terrorist group is therefore not only one that is sure to anger the Saudis, but also a questionable and contradictory one.

The motivation for the Biden decision is clear: the FTO designation may have a negative humanitarian impact in Yemen because some suppliers of food and other goods may back away for fear of prosecution. It may also be that the administration concluded the terrorism designation would make negotiating with the Houthis more complex, thereby hindering efforts to end the war. This will however make it harder to cooperate with the Saudis in negotiations.

US-Saudi relations have already been dealt serious blows at the start of the Biden presidency, and are bound to get worse after the release of the CIA Khashoggi report. Biden’s call with King Salman, although positive, is geopolitically insignificant, and unlikely to change this negative trajectory.