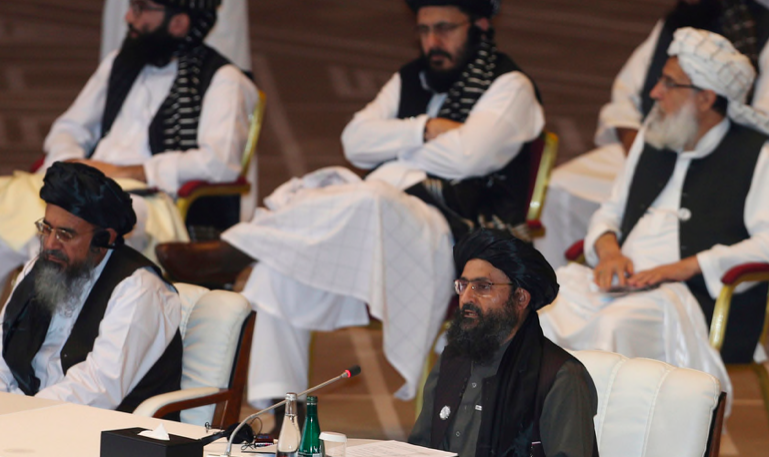 His plan is to pull out all American forces — numbering 2,500 now — by this Sept. 11, the anniversary of the attacks, which were coordinated from Afghanistan. Soon after Biden made his announcement, NATO chief Jens Stoltenberg in Brussels said the alliance had agreed to withdraw its roughly 7,000 forces from Afghanistan, matching Biden’s decision to begin a final pullout by May 1.

The drawdown would begin rather than conclude by May 1, which has been the deadline for full withdrawal under a peace agreement the Trump administration reached with the Taliban last year.

“It is time to end America’s longest war,” Biden said, but he added that the U.S. will “not conduct a hasty rush to the exit.”

“We cannot continue the cycle of extending or expanding our military presence in Afghanistan hoping to create the ideal conditions for our withdrawal, expecting a different result,” said Biden, who delivered his address from the White House Treaty Room, the same location where President George W. Bush announced the start of the war. “I am now the fourth United States president to preside over an American troop presence in Afghanistan. Two Republicans. Two Democrats. I will not pass this responsibility to a fifth.”

Biden’s announcement, which he followed with a visit to Arlington National Cemetery, marks perhaps the most significant foreign policy decision in the early going of his presidency.

He’s long been skeptical about the U.S. presence in Afghanistan. As Barack Obama’s vice president, Biden was a lonely voice in the administration who advised the 44th president to tilt towards a smaller counterterrorism role in the country while military advisers were urging a troop buildup to counter Taliban gains. Biden has also made clear he wants to recalibrate U.S. foreign policy to face bigger challenges posed by China and Russia.

Amid this announcment, questions are beginning to arise from all sides about how Afghanistan will deal with the withdrawal of US troops, and how this will affect the power dynamics between the Taliban and the Afghan government.

The departure of the Americans after two decades on the ground in Afghanistan will mark a new chapter for that country and will raise hard questions, including – might civil war erupt? Will the government hold?

The Taliban believe victory is theirs. Sitting over a cup of green tea, Haji Hekmat proclaims, “we have won the war and America has lost”. The decision by US President Joe Biden to delay the withdrawal of remaining US forces to September, meaning they will remain in the country past the 1 May deadline agreed last year, has sparked a sharp reaction from the Taliban’s political leadership. Nonetheless, momentum seems to be with the militants.

“We are ready for anything,” says Haji Hekmat. “We are totally prepared for peace, and we are fully prepared for jihad.” Sitting next to him, a military commander adds: “Jihad is an act of worship. Worship is something that, however much of it you do, you don’t get tired.”

The Taliban declared in the statement that the “American officials have understood the Afghan situation” but as the withdrawal had been put off “by several months” to September, rather than stick to the Doha Agreement (signed between the Trump Administration’s special envoy Zalmay Khalilzad and the Taliban last March) date of May 1, America had violated the agreement. This had “opened the way” for the Taliban to take “counter-measures”, and the American side “will be held responsible for all future consequences, and not the Islamic Emirate”.

According to the Long War Journal (a project of the US-based Foundation for the Defense of Democracies), of Afghanistan’s 325 districts, the Taliban are in control of 76 or 19%, and government forces 127 or 32%. The remaining are contested. According to the Council of Foreign Relations, the Taliban are stronger now than at any point since 2001, when US forces invaded Afghanistan.

After the full withdrawal of troops, Taliban are likely to see the war, which they believe they have already won, to its completion. The recently published US Threat Assessment Report, an annual US intelligence briefing, said prospects for a peace deal are dim, the Taliban are confident of victory in the battlefield, and the Afghan government will struggle to hold them at bay.

President Ashraf Ghani tweeted the stoic message that his government “respects the US decision and we will work with our US partners to ensure a smooth transition”. But he and others who have invested in a democratic Afghanistan know the country is close to losing all the gains of the last 15 years.

Meanwhile, there are hopes that the ongoing peace negotiations between the Taliban and the Afghan authorities, will provide a framework within which Afghanistan can overcome the challenges that will be brought up by US withdrawal.

The Taliban and Afghanistan’s government will join upcoming talks to begin the peace process in Afghanistan, Turkey’s foreign ministry announced on Tuesday.

The warring sides will join the United Nations and Qatar at a 10-day summit hosted by Turkey aimed at ending the 20-year conflict and laying the groundwork for a “just and durable” political settlement, the ministry said.

The Turkish government also said the negotiations are meant to “accelerate and complement” intra-Afghan talks that are ongoing in Qatar’s capital of Doha.

The summit is part of a U.S.-supported effort to begin negotiations before a May 1 deadline for withdrawing U.S. and NATO troops from Afghanistan.

The Taliban and the U.S. agreed to the May 1 withdrawal more than a year ago, but the Biden administration indicated Tuesday the U.S. would leave American troops in the country beyond the deadline, until September 11.

Turkey’s announcement that the Taliban would attend the talks came as a surprise, given that a Taliban spokesman said Monday the insurgent group would not attend the conference, potentially jeopardizing U.S. efforts to develop a peace plan.

Amid concern that violence in Afghanistan would intensify if a deal is not reached soon, the U.S. envoy for Afghanistan, Zalmay Khalilzad, has been visiting the region to garner support for a cease-fire and a peace agreement.

Turkey’s foreign minister, Mevlut Cavusoglu, has spent the past week inviting counterparts in the U.S. and in some Gulf Arab countries to the talks and encouraging them to support efforts to achieve peace in Afghanistan.

As previously mentioned, Turkey’s involvement in the process will certainly contribute to the possible success of the peace talks, despite the US withdrawal of troops. In fact, we could see the replacement of the US by Turkey as the temporary main influencer in Afghanistan and its prospects of peace.