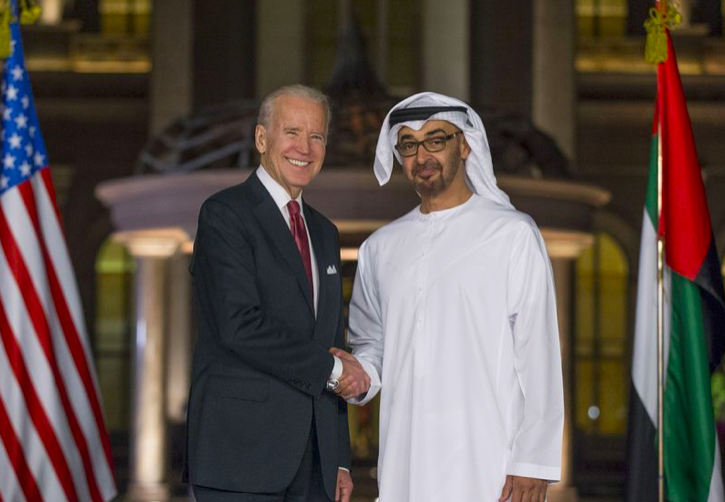 The administration of US President Joe Biden has told Congress it is proceeding with more than $23bn in weapons sales to the United Arab Emirates, including advanced F-35 aircraft, armed drones and other equipment, congressional aides said on Tuesday.

A State Department spokesperson said the administration would move forward with the proposed sales to the UAE, “even as we continue reviewing details and consulting with Emirati officials” related to the use of the weapons.

The Democratic president’s administration had paused the deals agreed to by former Republican President Donald Trump in order to review them. The sales to the Gulf nation were finalised right before Trump left office.

The Trump administration told Congress in November it had approved the sale to the UAE as a side deal to the Abraham Accords, an agreement brokered by the United States in September in which the UAE agreed to normalise relations with Israel.

In the last months of the Trump administration, Israel reached deals with the UAE, Bahrain, Sudan and Morocco as part of the accords.

The $23.37bn package contained products from General Atomics, Lockheed Martin and Raytheon Technologies, including 50 F-35 Lighting II aircraft, up to 18 MQ-9B Unmanned Aerial Systems and a package of air-to-air and air-to-ground munitions.

Some US legislators have criticised the UAE for its involvement in the war in Yemen, a conflict that has fuelled one of the world’s worst humanitarian disasters and are concerned that the weapons transfers might violate US guarantees that Israel will retain a military advantage in the region.

The Trump administration then finalised the enormous sale to the UAE on January 20, about an hour before Biden was sworn in as president.

The Biden administration announced the review in late January and the UAE said then it had anticipated the review and welcomed joint efforts to de-escalate tensions and for renewed regional dialogue.

The State Department spokesperson said on Tuesday the estimated delivery dates on the UAE sales, if implemented, were for after 2025 or later.

Will the Biden administration build strong ties with the UAE?

After initial signs that the Biden administration was keen on pulling back the US’s strong relations with the UAE, it is now becoming visible that the administration still views the Gulf state as a major regional player in various fields, and is therefore keen on developing cooperation.

Displaying this, the US and the UAE pledged in early April to help finance decarbonisation across the Middle East and North Africa through investments in clean technologies – a sign of renewed climate diplomacy, whose success will hinge on the region’s fossil-fuel dependent economies putting words into action.

The announcement, in the form of a joint statement, follows US Climate Envoy John Kerry’s visit to Abu Dhabi on 4 April, where he participated in a regional climate dialogue convened by the UAE, which also brought together nine other Mid-East nations.

Officials discussed how to step up the deployment of renewable energy and hydrogen production in the region, reduce emissions from hydrocarbon fuels and spur investments in innovative solutions, such as capturing and storing carbon.

In a separate statement, signed by all participating countries, they “committed to accelerate climate action,” and emphasised the link between investments in low-carbon solutions and job creation.

In an interview with The National, Kerry highlighted “the importance of an oil and gas-producing nation [the UAE] bringing together a group of nations that many people might think were improbably committed to dealing with [the] climate crisis.”

Saudi Arabia, the world’s biggest oil exporter and the de facto leader of the OPEC group, was not at the table.

The UAE’s new ambassador to Israel, Mohamed Mahmoud Al Khajah, and Start-Up Nation Central, a nonprofit organization seeking to boost Israel’s tech ecosystem, will set up a joint task force that will study ways to boost innovation cooperation between the nations.

The joint task force will aim to bring people together, share ideas and generate economic value for both countries, SNC said in a statement.

Nevertheless, there are some notable obstacles to US-UAE relations running smoothly, although no so significant as to threaten the relationship.

Last month, UAE’s Foreign Minister Abdullah Bin Zayed said that U.S. sanctions imposed on the government of President Bashar al-Assad, known as the Ceasar Act, were complicating the return of Syria to the Arab fold.

The return of Syria to the Arab League is in the interest of Syria and other countries of the region, he told a told a joint news conference in Abu Dhabi, with his Russian counterpart Sergey Lavrov.

He further pushed for the reinstatement of war-torn Syria in the 22-member Arab League and noted the government and private sector “could play a role” in returning Syria “to normal” after years of ruinous war.

Sheikh Abdullah’s remarks underscored shifting regional dynamics as the 10-year anniversary of Syria’s civil war looms next week. The United Arab Emirates had supported the Syrian opposition during the early years of the war.

But as the Syrian army recaptured most of the territory from the opposition, the UAE and other Arab countries made openings toward Assad’s government. In 2018, the UAE reopened its embassy in Damascus, for the first time since the start of an organized Arab diplomatic boycott in 2011.

The UAE’s support of Assad is in direct contradiction to the Biden regime’s opposition of the Syrian leader, and should the US increase its involvement in Syria, and the UAE opposes this, a rift could form between the allies.

Furthermore, the UAE has developed growing ties with Russia, as exemplified by Lavrov’s recent visit. This will be a major obstacle in UAE-US relations, as the Biden administration has taken a very hostile stance towards Russia, and is unlikely to tolerate its geopolitical allies developing links with Russia.

Still, the Biden administration has shown its willing to cooperate with the UAE, despite the visible differences. It remains to be seen how they will be resolved.