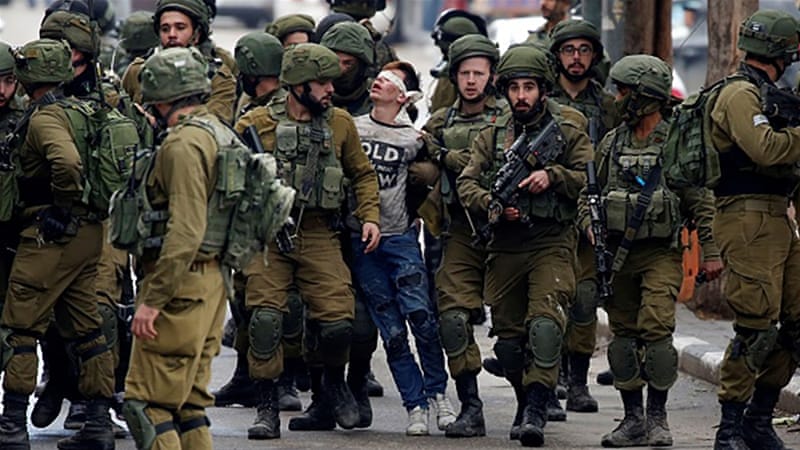 Read original article by Farah Najjar on Al Jazeerah or read below;

A 16-year-old Palestinian boy, shown in a photo that has been roundly condemned as symbolising the Israeli army’s use of excessive force, has been accused of throwing stones at a group of armed Israeli soldiers.

An image of Fawzi al-Junaidi, blindfolded and surrounded by more than 20 Israeli occupation forces, was widely denounced as it was shared on social media earlier this week.

The scene pictures al-Junaidi looking disoriented, wearing a grey shirt and ripped jeans as dozens of soldiers crowd around him carrying guns and wearing protective gear, including helmets and knee pads.

The teenager, who denies throwing stones, was arrested on Thursday amid ongoing protests across the West Bank, East Jerusalem and the Gaza Strip over a US decision on December 6 to recognise Jerusalem as the capital of Israel.

In six days, at least 16 other Palestinians have been arrested for protesting. At least four have been killed in the violence since the US declaration, and more than 700 injured.

‘He was beaten with a rifle’

“He said he was fearful and was running away when tear gas canisters were being thrown,” his lawyer, Farah Bayadsi, told Al Jazeera. “Fawzi said he was beaten with a rifle and he showed up with bruises all over his neck, chest and back.”

She told Al Jazeera that the child would face formal charges in front of an Israeli military court on Wednesday, following an initial hearing on Monday.

“The police had called for an extension on Fawzi’s arrest during the initial hearing,” said Bayadsi, who works under the Defence for Children International – Palestine (DCIP).

“The prosecutor demanded a seven-day extension to the arrest so that they can prepare a list of indictments, but we refused. The list of formal charges will be announced [Wednesday] at the second hearing,” she said.

According to Bayadsi, the judge was stunned at the excessive force that al-Junaidi was subjected to – most apparent in the manner in which he was transferred to prison.

“He showed up with large slippers from the prison. He had lost his shoes and spoke about the way he was abused while being transferred to prison,” she said.

“The prosecutors didn’t even say whether the soldiers would be investigated for using excessive force. The whole case so far has been handled with neglect.”

Though unlikely, Bayadsi said the defence team would try to secure al-Junaidi‘s release while his case is ongoing.

“It would be easier to speak with him [and] other witnesses, and to gather more evidence,” she said.

‘He was not protesting’

Due to his father’s leg injury and his mother’s terminal illness, al-Junaidi had been the main provider for his family of nine.

His uncle Rashad said that he was simply in the wrong place at the wrong time.

“He left his house to buy some groceries. Unfortunately, as he was looking for the store, he bumped into a military ambush and was confronted with Israeli forces.

“They beat him, blindfolded him, arrested him, and first took him to the detention centre in a nearby settlement. That night, at 2am, he was transferred another detention centre,” he told Al Jazeera.

“The day after, they took him to Ofer prison.”

Ofer is in Israel and mostly holds administrative detainees. The prison rarely grants prisoners with visitation rights, and families are often denied permits to cross over to Israel altogether.

“He was not protesting or anything”, Rashad said. “Unfortunately, there has been absolutely no form of communication – we haven’t spoken to him since his arrest.”

Administrative detention is a practice in which Israel imprisons Palestinians without charge or trial, often based on “secret evidence”.