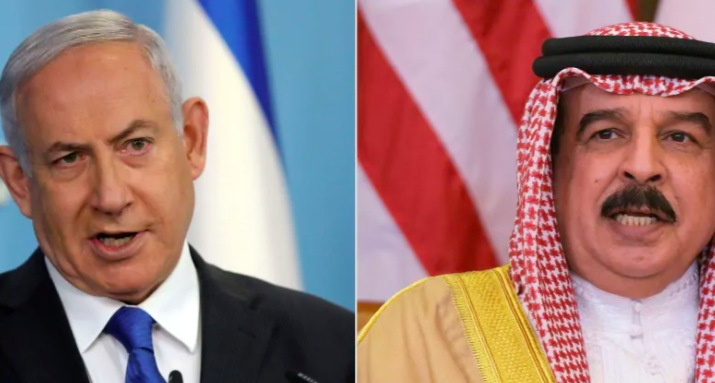 Israel and the Gulf state of Bahrain have reached a landmark deal to fully normalise their relations, US President Donald Trump has announced. “The second Arab country to make peace with Israel in 30 days,” he tweeted. For decades, most Arab states have boycotted Israel, insisting they would only establish ties after the Palestinian dispute was settled. But last month the United Arab Emirates (UAE) agreed to normalise its relationship with Israel. There had been much speculation that Bahrain might follow suit.
Mr Trump, who presented his Middle East peace plan in January aimed at resolving the Israel-Palestinian conflict, helped broker both accords.

Representatives of the United Arab Emirates, Bahrain, Israel, and United States governments will converge in Washington, DC on Tuesday to sign historic normalisation accords between the Gulf nations and Israel.

The UAE agreement, announced in August and since dubbed the “Abraham Accords” by White House officials, makes the UAE the third Arab country and first in the Gulf Cooperation Council (GCC) to agree to establish relations with Israel.

The agreement ends the UAE’s economic boycott of Israel and allows the possibility of advanced US weaponry sales to the Emirates. Blasted by Palestinians as a “betrayal”, a sentiment echoed by regional players Turkey and Iran, the deal will have lasting, unprecedented geopolitical ramifications, experts told Al Jazeera.

But the extent of these ramifications remains to be seen.

On returning from a recent trip to the Middle East, Mr Kushner told journalists the Trump administration had “unleashed an energy positivity” in the region that was “quite overwhelming.”
White House bullet points suggest how Mr Trump will be framing his international dealmaker credentials for his election campaign: as a harbinger of Middle East peace and prosperity, with more Arab and Muslim countries likely coming on board to normalise relations with Israel. This will allow Mr Trump to deflect attention from the “Deal of the Century” that he failed to achieve: Israeli-Palestinian peace. That project was widely criticised as heavily slanted in Israel’s favour and rejected by the Palestinians.

How did the world react?

As was the case for the UAE-Israel agreement, the Bahrain-Israel deal got mixed reactions from the global scene. Negative reactions were not lacking, starting from back home, as some members of Bahrain’s opposition and civil society condemned on Friday Manama’s announcement that it had agreed to normalize relations with Israel. “The Bahraini decision to normalize with the Zionist enemy is illegitimate from both sides — because the Bahraini government does not possess the legitimacy to normalize, and because the Zionist entity is itself illegitimate,” al-Wefaq, once Bahrain’s largest official political party, said in a statement.

Al-Wefaq, whose constituency is largely composed of Shi’ite Bahrainis, controlled 18 out of 40 seats in Bahrain’s parliament before the Arab Spring. The government dissolved the party in 2016, forcing many of its leaders into exile. Some Bahraini civil society groups came out against the normalization deal, and the top hashtags trending on the kingdom’s social media were #Bahrainis_Against_Normalization and #Normalization_Is_Betrayal.

In addition to this, the Palestinian Authority (PA) condemned the Bahrain-Israel normalisation deal as another betrayal by an Arab state. The agreement was “a stab in the back of the Palestinian cause and the Palestinian people”, like the UAE-Israel deal announced last month, Ahmad Majdalani, social affairs minister in the occupied West Bank-based PA, told AFP. Hamas, which controls the Gaza Strip, said the deal was an “aggression” that dealt “serious prejudice” to the Palestinian cause. Iran said Bahrain was now partner to the “crimes” of Israel. “The rulers of Bahrain will from now on be partners to the crimes of the Zionist regime as a constant threat to the security of the region and the world of Islam,” the foreign ministry said in a statement on Saturday. The Turkish Foreign Ministry also strongly condemned Bahrain’s decision to establish diplomatic ties with Israel, adding it will deal a fresh blow to efforts to defend the Palestinian cause. “It will further encourage Israel to continue illegitimate practices towards Palestine and its efforts to make the occupation of Palestinian lands permanent,” the ministry statement said. As visibly shown, most of the negative reactions come from the same nations as they did following the UAE-Israel agreement.

Despite the negative reactions from the countries and groups mentioned above, the fact remains that most of the international community reacted positively to the news. Oman welcomed Bahrain’s decision to normalise relations with Israel and hopes it will contribute to Israeli-Palestinian peace, Oman state media said on Sunday, Reuters reported. Egyptian President Abdel Fattah al-Sissi on Friday welcomed the normalisation agreement between Bahrein and Israel, describing it as an “important and historic step.” “I value this important step towards establishing stability and peace in the Middle East in a way that achieves a just and permanent settlement of the Palestinian cause, President al-Sissi wrote on Twitter.

As expected, European leaders welcomed Bahrain’s decision to normalize ties with Israel, expressing hopes it would help advance the cause of peace in the region. In Israel, the news that a second Gulf state was willing to establish open ties, after the United Arab Emirates, was met with scattered praise.

US president Trump ofcourse hailed the decision and his role in it as ‘historic’ and praised the deal.

What is behind this change? Has Palestine been forsaken?

With the quick successiveness of the Bahraini move following the UAE’s initial move to normalize relations with Israel, many have been led to question the motivation of this move, in what looks to be a Gulf Arab phenomenom. It has also led many to say that the Palestinian cause has been forsaken in favour of the Gulf Arab nations’ own interests, an observation that runs back several years before the latest deals.

Let’s focus on Bahrain first. Ever since US President Donald Trump announced on August 13 that the United Arab Emirates and Israel had agreed to establish diplomatic ties, there had been rife speculation that Bahrain would be next. Bahrain’s political agenda is “pretty much dictated by Saudi Arabia”, according to Marwa Fatafta, a policy member with the Palestinian policy network Al-Shabaka.  In late 2018, just months before Manama agreed to host a US-led conference to unveil the economic part of Trump’s so-called Middle East plan, Saudi Arabia, the UAE and Kuwait pledged $10bn in financial support for Bahrain to steady its finances. Besides being “financially dependent on its neighbours”, Bahrain’s new alliance with Israel may help it entrench its power and “crush any resistance to authoritarianism or efforts towards freedom and democracy”, Fatafta said. In 2011, during the onset of the Arab Spring uprisings, Saudi Arabia sent troops to Bahrain to suppress anti-government protests. Many of those who rallied against the Bahraini monarch were from the country’s majority Shia population who have long complained of repression. So, joining the bandwagon led by the US may also provide the Bahraini monarchy “continued protection against its own people”, said Mouin Rabbani, co-editor of the Jadaliyya publication.

As for the motivation for Arab states as a whole, William Hartung, director of the Arms and Security Program at the DC-based Center for International Policy, told Al Jazeera arms sales were an “important factor” in the agreements. The UAE has long wanted F-35 fighter jets, Hartung said, and larger drones, which the US was unable to sell because of its commitment to Israel’s military advantage. Singling out Iran as a common enemy was also a crucial contributor to the deal’s success. This common hostility towards Iran and increasingly Turkey has led to a major convergence of geopolitical interests for Israel and the Gulf.

Therefore, according to Middle East experts, other Gulf countries could follow this path to normalising relations with Israel as set out by Abu Dhabi and Manama. During a Middle East tour in late August which took in Israel, Sudan, Bahrain and the United Arab Emirates, US Secretary of State Mike Pompeo, even said he was “optimistic” at the idea of seeing “other Arab countries” follow the example of the Emirates.

This increasingly potent trend has made the Palestinian camp very worried, and is leading them to reconsider their ties with some Arab states. Palestinian Prime Minister Mohammed Ishtayeh has said the government will present a recommendation to President Mahmoud Abbas to reconsider relations with the Arab League. “The Arab League has become a symbol of the Arab inaction,” Ishtayeh said during his weekly cabinet meeting on Monday.