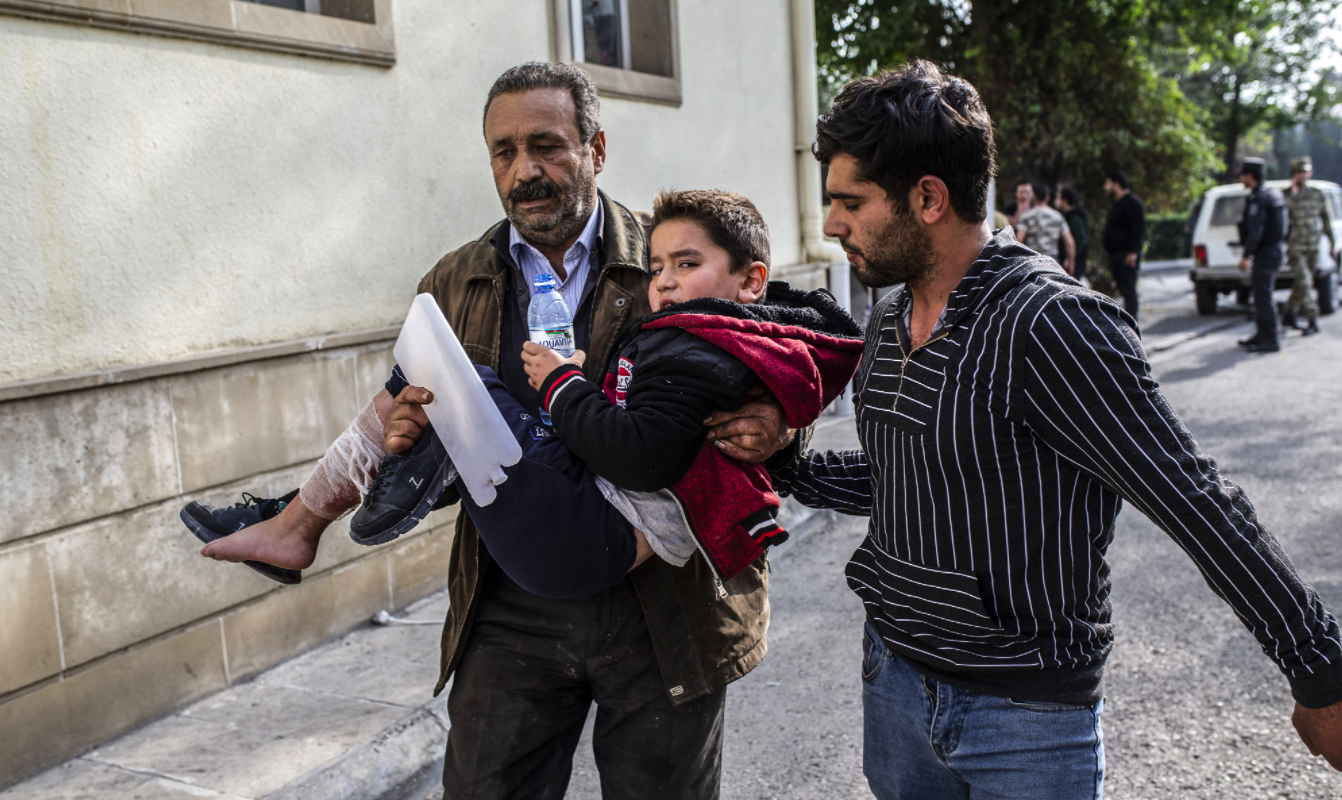 On the 26th day of the conflict in Nagorno-Karabakh, the entire territory on the Azerbaijan-Iran border that was held by Yerevan for almost 30 years has now been saved, President Ilham Aliyev said Thursday. The president celebrated the victory for the people of Azerbaijan and Iran.

“The state border between Azerbaijan and Iran has been completely secured through liberation of the Agbend settlement,” he added.

This success of the Azerbaijani forces in the war has made it clear that if the current trend continues, the whole Karabakh territory could be re-captured by Azerbaijan in the next months, as Armenia are struggling to deal with the modern Turkish and Israeli combat drones that Azerbaijan are using.

Meanwhile, as Azerbaijani advances continue, there have been increasingly common reports of Armenian forces shelling Azeri civilian areas, in what appears to be an act of desperation.

Most recently, Azerbaijan has accused the Armenian military of killing at least 21 civilians in a missile strike as fighting over the disputed territory of Nagorno-Karabakh intensifies.

Dozens more were reportedly wounded in the strike on the Azeri town of Barda, not far from the ongoing clashes. Armenia has denied carrying out the attack, and accused Azerbaijan of targeting a maternity ward in the area.

Azerbaijani presidential spokesman Hikmet Hajiyev said Armenian forces had “used cluster munitions to inflict excessive casualties among civilians” in Barda, in central Azerbaijan. Images posted on social media showed damage to streets and vehicles with what appeared to be several bodies in body bags laid out on the road.

Wednesday’s strike marked the deadliest reported attack on civilians in a month of fighting over Nagorno-Karabakh. Lala Ismayilova, an English-language teacher in Barda, lost her 31-year-old brother Fuad Ismayilov, on Wednesday.

“My father passed away years ago, and Fuad was the man of our family. After the first shelling, he went out to see what happened.

“The second rocket landed when he went outside. He was young. How can I live without my brother?”

Barda MP Zahid Oruj told Al Jazeera that Armenia was attempting to “create scenes similar to Syria and Libya, with people’s blood shed in the streets”.

“It seems like they (Armenia) are intent on creating a picture of war that shows Azerbaijan suffering, inside Azerbaijan’s borders, rather than in the battlefields. Everyone should be convinced that peace in the region depends on Azerbaijan,” said Oruj.

Wednesday’s attack came despite a US-brokered truce agreed at the weekend, the third ceasefire attempt in a row to collapse just minutes after it took effect.

Civilian suffering in the war

Armenia also accused Azerbaijani forces of deadly new attacks on civilian areas of Karabakh, as both sides claim the other is targeting civilians after weeks of fierce front-line clashes. Because of their power, more than 100 countries have banned cluster munitions, though Armenia and Azerbaijan have not.

Azerbaijan does not disclose its military losses, but they say the fighting has killed 69 civilians and wounded 322.

Yerevan accused Azerbaijani forces of attacking civilian areas in Nagorno-Karabakh, including shelling a hospital and maternity clinic in the enclave’s main city, Stepanakert. The rocket attacks caused damage but inflicted no casualties.

The UN Secretary-General on Sunday condemned “all attacks on populated areas” in and around the Nagorno-Karabakh zone of conflict, as Armenia and Azerbaijan reportedly accused each other of violating the latest humanitarian ceasefire agreement.

In a statement released by his Spokesperson, António Guterres described the “tragic loss of civilian lives, including children, from the latest reported strike on 16 October” on Azerbaijan’s second largest city of Ganja, as “totally unacceptable”.

The UN chief reiterated that “indiscriminate attacks on populated areas anywhere, including in Stepanakert/Khankendi and other localities in and around the immediate Nagorno-Karabakh zone of conflict”, were likewise totally unacceptable.

Many have doubts whether the cease-fire agreements and diplomatic talks will lead anywhere. His namesake, Azerbaijan’s president, is relying on his army’s advances  diplomacy or no diplomacy. ”Nobody can break our resolve,” President Ilham Aliyev recently told senior military figures in a televised situation report. He added that the enemy would be driven back until Nagorno-Karabakh is retaken.

Nobody can foresee what price Armenian and Azerbaijan civilians will have to pay for the ongoing hostilities. And as for the refugees at the Barda school  will they be able to return home, or will it become too dangerous even where they have found temporary shelter? It is however clear that civilian casualties will not be enough to stop the current war.