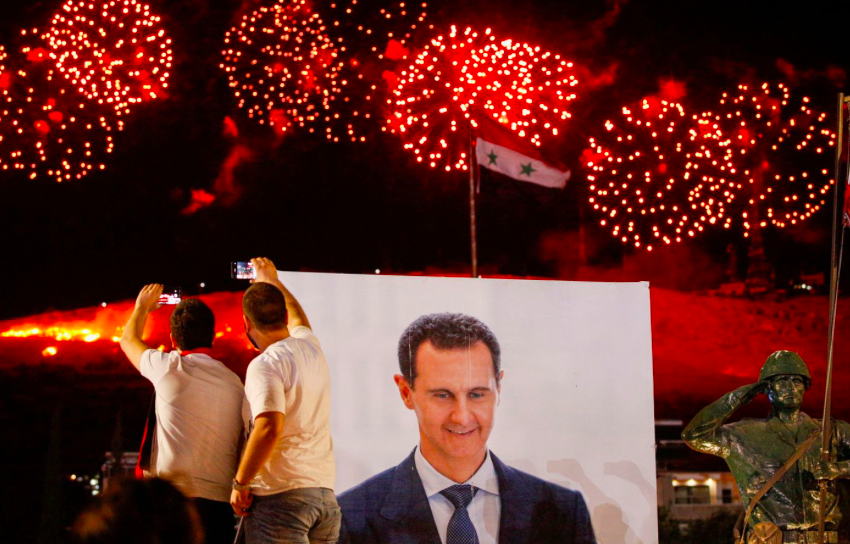 Syrian President Bashar al-Assad won a fourth term in office with 95.1% of the votes in an election that will extend his rule over a country ruined by war but which opponents and the West say was marked by fraud.

Assad’s win was not in doubt, in an election where officials said 18 million were eligible to vote. But in the country ravaged by the 10-year-old conflict, areas controlled by rebels or Kurdish-led troops did not hold the vote. At least 8 million, mostly displaced, live in those areas in northwest and northeast Syria. Over 5 million refugees — mostly living in neighboring countries — have largely refrained from casting their ballots.

Wednesday’s controversial presidential vote was the second since the beginning of Syria’s uprising-turned-war a decade ago, a conflict that has killed hundreds of thousands of people, forced millions to leave the country and wrecked its infrastructure.

Head of parliament Hammouda Sabbagh announced the results at a news conference on Thursday, saying voter turnout was about 78 percent, with more than 14 million Syrians taking part.

Marei got 3.3 percent of the vote, while Salloum received 1.5 percent, Sabbagh said.

Huge election posters glorifying al-Assad had mushroomed across the two-thirds of the country under his control in the lead-up to Wednesday’s poll.

Before the election results were announced, state media said tens of thousands of Syrians gathered on Thursday in various cities to celebrate after the election committee, quoted by local TV, said “the ballot counting process has been completed in the majority of Syrian provinces”.

Some danced and beat drums, while others waved Syrian flags and carried pictures of al-Assad, state media reported.

“Tens of thousands of people in Tartus province gathered at the city’s seafront to celebrate” al-Assad’s expected win, according to SANA.

Thousands of other Syrians rallied in the coastal city of Latakia and in Umayyad Square in the capital Damascus, which along with Tartus and Latakia are bastions of the government.

Celebrations were also under way in Aleppo and in Sweida, in Syria’s south, where a crowd gathered in front of the city hall, state media said.

The vote took place amid the lowest levels of violence since the war erupted in 2011 – but with the economy in free fall.

More than 80 percent of the population live in poverty, and the Syrian pound has plunged in value against the US dollar, causing skyrocketing inflation.

Al-Assad was first elected by referendum in 2000 after the death of his father Hafez al-Assad, who had ruled Syria for 30 years.

Were the elections fair?

As Assad wins an astounding 95% of the vote, there have been many accusations, and signs, that the elections were not held in a fair or transparent manner.

In the previous polls in 2014, Assad had won nearly 89 percent of the vote.

In recent weeks, dinners and dances have been held in support of the Syrian president’s campaign.

Many of these events are organized by Syrian businessmen and other citizens who see this presidential election – the first in seven years — as a way to ingratiate themselves with the regime. Assad’s government, with its sprawling security apparatus, once again tightly controls almost every aspect of Syrian life — from whom you can do business with to what you can say.

Assad’s two challengers in the presidential race are Abdallah Saloum Abdallah, a former deputy Cabinet minister, and Mahmoud Ahmed Marei, who leads a small opposition party approved by the government.

Meanwhile, known political opponents to Assad remain in exile, or are among the tens of thousands of people that the United Nations says have been arrested, tortured and disappeared into regime prisons since the start of the conflict in 2011.

The presidential candidates in this election have lacked both the funds and time to campaign. That means they have been unable to mount any significant challenge to Assad, whose family has ruled Syria with an iron fist for some five decades.

Makki says Syrian law allowed the candidates only 10 days to campaign, so many Syrians barely knew who Assad’s challengers were. Instead of a serious presidential race, he says, the run-up to the election has been a “celebratory kind of pro-Assad great spectacle that has been played and replayed in every part of the country.”

There were also videos circulating online suggesting that government employees filled applications, chose one candidate, signed the paper and put the paper in the ballot box on behalf of the voters, who only gave their IDs.

The UN’s Syria envoy, Geir Pedersen, noted the polls were not held under the political transition called for by Security Council Resolution 2254 which provides for free and fair elections.

“What is required is a Syrian-led and -owned political solution, facilitated by the United Nations and backed by constructive international diplomacy,” he said.

US and European officials have also questioned the legitimacy of the election, saying it violates UN resolutions in place to resolve the conflict, lacks any international monitoring, and is unrepresentative of all Syrians.

On the eve of the election, the United States, Britain, France, Germany and Italy said the poll was “neither free nor fair”, and Syria’s fragmented opposition has called it a “farce”.

What does this mean for Syria’s opposition?

The latest election result, to many has shown the extent of Assad’s grip on the nation, as well as the miserable state the Syrian opposition is in.

The result was expected and served as another projection of the regime’s resilience.

Damascus-based secular opposition leader said that it was a “sham” election designed to prolong President Bashar al-Assad’s grip on Syria shows that only international pressure for a U.N.-backed peace plan can pave the way for democratic rule.

Meanwhile, after 10 years of revolt, the Syrian opposition is in a state of crisis. The momentum of 2011-2015 – the golden era of the revolution – has ebbed away. Regional and international actors who supported the opposition have migrated their policies from “Assad must go” to accommodating themselves to his continued survival, however awkward and distasteful that might be.

The Syrian Opposition Coalition (SOC) appears abandoned by its friends and increasingly irrelevant.

At its heart, the opposition’s crisis is one of legitimacy. Yes, militarily it has faced setbacks and financially it has always struggled, but no Syrian on the ground at the time ever expected the SOC to fight a war or manage an economy.

From Day One, its purpose was clear: drawing in decisive Western military intervention that would topple Assad. What the protestors, and later the armed opposition groups, expected from their political leaders in Istanbul was a repetition of the Libyan scenario, and consequently the SOC established its legitimacy on the promise that it can deliver exactly that.

But the leaders of the SOC did not live up to their side of the bargain. The West did intervene militarily, but it was not decisive; the slow stream of weapons to the armed opposition gave Russia plenty of time and pretext to conduct a military intervention of its own.

Assad’s latest election win also counteracts all UN attempts to establish a political solution. The U.N.’s Constitutional Committee, composed of regime and opposition representatives tasked with drawing up a new constitution for the country, has yet to make any serious breakthrough, despite it being formed in 2019.

The regime has procrastinated every step of the way, a situation made worse by Moscow’s interpretation of UNSCR 2254 as essentially a means of rehabilitating Assad and not as a road map for a political transition.

If the opposition is to make any progress it must first of all unite and form a stable, and reliable leadership, and consequently continue efforts with UN to reach a political solution. However, this would remain futile without the cooperation of Assad, and the regional powers in Syria like Russia and Iran. Hence, the UN security council should form an effective strategy to pressure these powers to engage in these negotiations. Furthermore, Turkey, who is a third regional power with interests in Syria, must increase its efforts to bring Russia and Assad to the negotiating table, just as it has done to establish common peace patrols.

Finally, ahead of such elections, the Syrian opposition must produce its own serious candidate to counter Assad, and urge foreign observance of future elections.