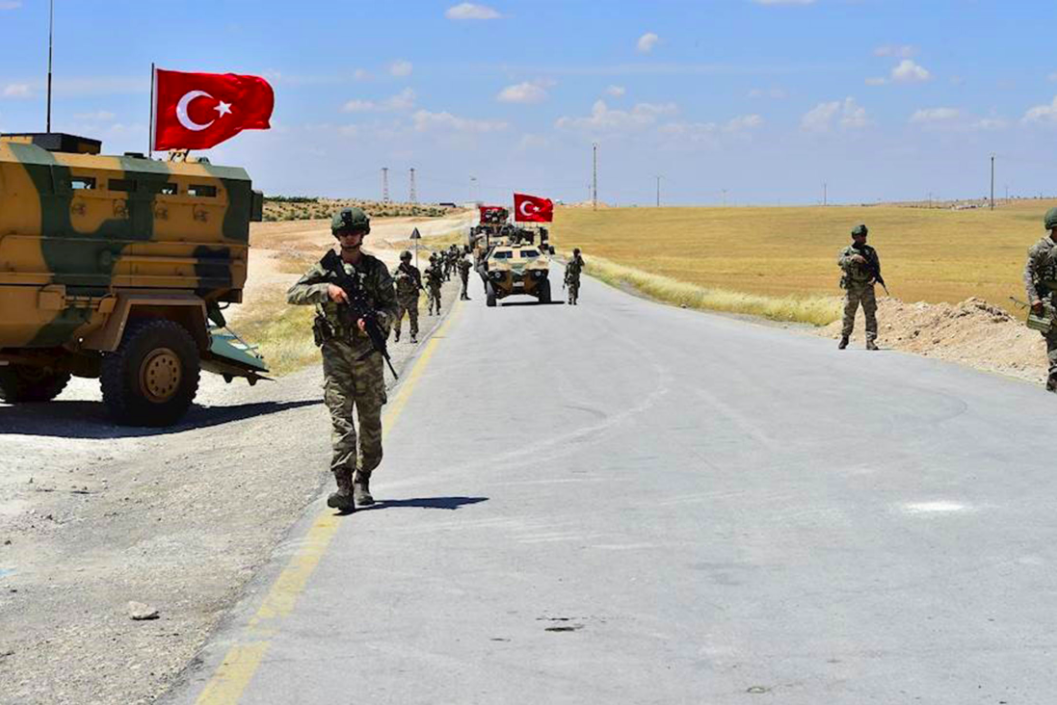 Reports of Turkey preparing for an offensive

The Commander of the Syrian National Army’s 2nd Army Corps, Ahmed Osman, has issued a statement regarding the military situation in the East of Euphrates.

This is a sign that Turkey could be preparing for an offensive against Kurdish militia in Ain Issa.

On Sunday, Syrian rebel fighters supported by the Turkish military carried out artillery attacks on the town of Ain Issa and several nearby villages, local news media reported.    Ain Issa is currently controlled by the Kurdish-led Syrian Democratic Forces (SDF).

The town is located on the strategic M4 Highway that connects northeast Syria to the western part of the war-torn country.   “In the past two weeks, these attacks on Ain Issa have increased significantly,” said Hosheng Hesen, a reporter with the Syria-based North Press Agency.

The SDF is an extension of the Turkey-based Kurdistan Workers’ Party (PKK), an outlawed group designated as a terrorist organization by Ankara and Washington.  In October 2019, Turkey launched a major offensive against SDF fighters in Syria, dislodging them from Tel Abyad and Ras al-Ayn, two towns located north and east of Ain Issa respectively.  With a continued Turkish military buildup near the Syrian border, observers say Turkish forces could begin a new large-scale operation to capture Ain Issa and its surrounding areas from Kurdish forces.

“At this point, everything is possible,” Rami Abdulrahman, head of the Syrian Observatory for Human Rights, said.

The Syrian Observatory reported that the area has been witnessing “almost daily bombardment” in recent weeks.  In October, Turkish President Recep Tayyip Erdogan on several occasions talked about the possibility of a new Turkish offensive into northeast Syria.

Two weeks ago, military sources from the Syrian Democratic Forces (SDF) confirmed that the Turkish army and Syrian factions had set up a military base in the village of Sayda, north of Ain Issa.

The Kurdish news agency, Hawar, published recorded videos showing the expansion of the military site, hundreds of meters from the M4 international highway.

According to residents, the Turkish forces have reinforced their military positions along the conflict lines in the vicinity of Ain Issa in Raqqa and Tal Tamar, Zarkan and Abu Rassin in their military operational areas, northeast of Syria.

They also said that the Turkish forces equipped those positions with radars and tracking devices, in addition to the presence of hundreds of soldiers, vehicles and heavy weapons.

This is another hint that points to the increasing possibility of a Turkish offensive on the city in the coming weeks, or even days, as forces are mobilizing, and an advanced position has been established, in addition to the latest bombings of the positions mentioned above.

Meanwhile, Turkey’s presidential spokesman İbrahim Kalın and the U.S. special envoy for Syria on Dec. 2 discussed the latest developments in the region, according to an official statement. Kalin received Joel D. Rayburn and his delegation at the presidential complex in the capital Ankara.

The two officials discussed the Syrian crisis and the constitutional talks with particular focus on the restive city of Idlib, Turkey’s presidential office said in a statement. They also discussed counter-terrorism efforts and the issue of refugees.

Kalın affirmed Turkey’s commitment to de-escalation in Syria despite continued cease-fire violations by the regime and its allies.

They agreed to intensify joint efforts to support the constitutional committee aiming to end civil war in Syria and paving the way for free and fair elections, along with ensuring the safe return of refugees. Kalin underlined that any political, economic and military support to terrorist groups in Syria is unacceptable.

Turkey and the United States share a common vision for Syria and have identical interests in ending the decade-old conflict, the U.S. special envoy on Syria has said, underlining the fact that the two allies always had close cooperation despite disagreements and even in the worst times.

“For those of us inside the process, it’s always felt to us like we had close coordination and cooperation with our Turkish counterparts. I think we just need to build on that. There are so many areas we have identical interests. I think we can build on those,” Joel D. Rayburn, who has recently been appointed as the new American special envoy for Syria, told the Hürriyet Daily News in an interview in Ankara on Dec. 2.

Rayburn paid a visit to Ankara and held meetings with senior Turkish officials, including President Recep Tayyip Erdoğan’s chief foreign policy adviser İbrahim Kalın. Turkey and the U.S. have long been in cooperation throughout the Syrian conflict, but the latter’s support to the SDF had caused a rift between the two allies.

“I have to tell you: We had our disagreements, we had our ups and downs but broadly speaking, even in the worst times, it’s felt to us inside the U.S. system that we had close cooperation with our Turkish counterparts. Because at the end of the days, we are allies and we share the common vision for what the rest of the world needs out of Syria in order for our interest to be secured,” he said.

Cooperation with Turkey is an essential part of the efforts to bring an end to the ISIL phenomenon in Syria, to make sure that al-Qaeda cannot have a safe haven in Syria, to counter the destabilizing role of Iran and its ally, Hezbollah, and to achieve a political solution so that the Syrian people can return to a normal life and peace, the U.S. diplomat said.

This show of US support for Turkey in recent weeks could signify that the US has given a green light and would even support Turkey’s possible move against the SDF in Ain Issa. It remains to be seen in the next weeks whether this escalation will occur, but several factors point to this being the case.