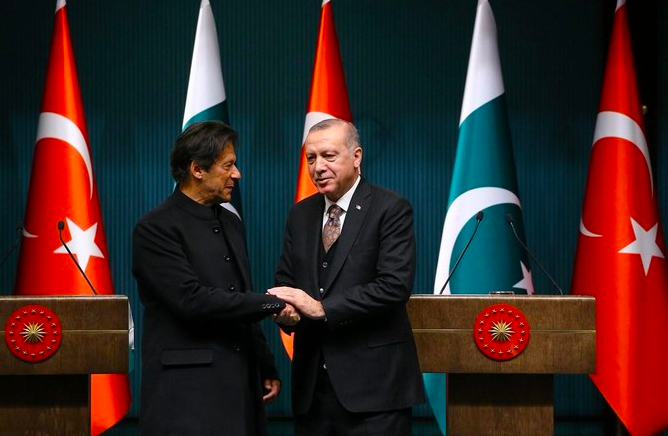 The statement said that during the visit, “bilateral relations will be reviewed and regional and global issues will be discussed.”

“Preparations of the Seventh Turkey-Pakistan High Level Strategic Cooperation Council meeting will also be coordinated during the meetings,” it noted.

Çavuşoğlu will also attend “the Second Trilateral Meeting of Turkey-Pakistan-Azerbaijan Foreign Ministers,” the statement added. As part of his visit, he will officially inaugurate the new compound of Turkey’s Consulate General in Karachi, Pakistan’s largest city, it said.

Noting that Cavusoglu will hold talks with his Pakistani counterpart Shah Mahmood Qureshi and calls with the country’s prime minister and the president, the statement said bilateral relations as well regional and international issues will be discussed during the visit. The statement also underlined the fraternal relations between Turkey and Pakistan, stressing that Cavusoglu’s visit comes as part of regular high-level exchanges between the countries.

“Forthcoming visit of the Turkish Foreign Minister will help further deepen the bilateral ties and enhance cooperation in multiple areas,” the statement added.

Pakistan condemns US sanctions on Turkey

Last month, after the Trump administration announced it was slapping sanctions on Ankara for its decision to purchase the S-400 air defense missile system from Russia, Pakistan said it is “deeply concerned” by the imposition of “unilateral” sanctions against Turkey by the United States and is stressing the need for resolving all issues through dialogue.

Urging dialogue, the ministry said it “acknowledges and appreciates” Turkey’s invaluable role towards regional and international peace and stability.

“The people and the government of Pakistan reiterate their strong support for the government and the people of Turkey in their quest for national security, peace and prosperity, and as always, will continue to stand by them towards the achievement of these shared goals,” the statement concluded.

In April 2017, when its protracted efforts to buy an air defense system from the US proved fruitless, Turkey signed a contract with Russia to acquire the S-400 shield.

US officials have voiced opposition to their deployment, claiming they would be incompatible with NATO systems and would expose F-35 jets to possible Russian subterfuge.

Turkish companies are said to be working to supply patrol craft and a fleet tanker for the Pakistan navy and upgrade the South Asian nation’s French-designed submarines.

Ankara also sealed a deal in 2018 to sell a batch of 30 T-129 attack helicopters to Pakistan, but there has been little progress to execute it because the U.S. has not granted export licenses to Turkey.

Later that year, a Turkish shipbuilder announced it had signed a contract to supply four MILGEM stealth corvettes, which are small multi-role warships, to the Pakistani navy.

Construction of the MILGEM warships has already started and Pakistani officials were expecting to get the first ship by the end of 2021.

“The contract entails construction of two corvettes at Turkey while two at Karachi Shipyard & Engineering Works,” the Pakistan navy said in a recent statement.

The MILGEM and the T-129 helicopter both use U.S. components.

Last month, Turkey and Pakistan reaffirmed the resolve to further strengthen defense cooperation after a two-day meeting among the high-level military officials of the two countries on Thursday. The 15th round of Pakistan-Turkey High-Level Military Dialogue Group (HLMDG ) decided that Turkey and Pakistan would work together to enhance defense cooperation, focusing on security and counter-terrorism, a statement by Pakistan’s Defense Ministry said.

“During the HLMDG meeting, both delegations discussed all avenues of cooperation in military training, education, counter-terrorism, and defense industry cooperation including joint production and procurement. Both sides shared perspectives on prevailing regional environment including the Middle East, South Asia, and Afghanistan,” the statement said.

It added that the meeting also took stock of the progress that has been made since the last HLMDG meeting held in Pakistan in April last year.

“The HLMDG is the highest level of institutional mechanism between Pakistan and Turkey, mandated to charter policies and action plans to promote ties in the defense field. The next session of Pakistan-Turkey HLMDG meeting will be held in Pakistan in 2021,” it said.