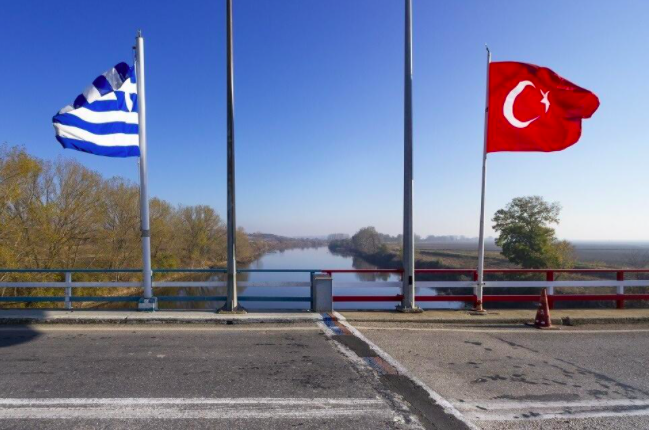 Rise in Turkey-Greece tensions in 2020

Greece and Turkey have been involved in a heated standoff in the Eastern Meditteranean in the last months. A series of regional developments have recently increased the tensions between Turkey and Greece, further extending the already-present differences and putting the larger regional stability at risk. Confrontations between the two neighbours are nothing new and have been present, over various issues, since the earliest days of their bilateral relations.

After reports at the end of July that Turkish naval ships have moved to patrol the area, the Greek military was placed on alarm. Many Greek islands in the Aegean and the Eastern Mediterranean are within sight of the Turkish coast, so issues of territorial waters are complex and the two countries have come to the brink of war in the past. The Greek Foreign Ministry issued a statement calling on Ankara to “immediately cease the illegal activities” that it said violated the nation’s sovereign rights. On Wednesday, the Turkish Foreign Ministry rejected the assertions, saying the Oruc Reis survey ship was operating within Turkey’s continental shelf. “Greece bases this claim on the presence of remote islands far from its own mainland, most notably Kastellorizo,” Turkish Foreign Ministry Spokesperson Hami Aksoy said in a statement at the time. “This maximalist continental shelf claim of Greece is contrary to international law, jurisprudence and court decisions.”

In September last year, Greece’s first female president, Katerina Sakellaropoulou, took a high-powered military helicopter to Kastellorizo, a tiny Greek island in the eastern Mediterranean, on the 77th anniversary of its nationhood. The 6-kilometer long spit of harsh rock and scrub, one of Greece’s easternmost islands, owes millennia of habitation to geographic good fortune. With its back to the Aegean and its mouth towards Turkey’s looming landmass, Kastellorizo’s bay turns ocean swells to mill pond tranquility, making it a prized harbor for many centuries of traders plying goods between Asia Minor and Europe.

Furthermore, in recent days Greece has held provocative joint Navy drills in the Mediterranean with the US.

Turkey and Greece agree to talks

In what appears to be a major breakthrough, Turkey and Greece are set to hold preliminary talks to tackle differences over maritime boundaries and offshore energy resources for the first time since the last round of similar negotiations in 2016.

Officials from the two countries will meet in Istanbul on Jan. 25 to begin “exploratory talks,” the Turkish and Greek foreign ministries said late Monday.

The announcement marks the most significant development since the European Union last month pledged to expand a list of people targeted with sanctions over Turkey’s energy exploration in the disputed waters of the eastern Mediterranean Sea.

Athens is expected to focus discussions on maritime zones in the Aegean and East Med in line with the UN Convention on the Law of the Sea (UNCLOS), while Ankara has not set any pre-conditions for the talks.

Turkey is not a signatory of UNCLOS and does not recognize the government of Cyprus, an EU member.

Experts have also underlined the importance of the announcement’s timing.

“Ankara and Athens are taking steps toward a potential compromise as the Southern Gas Corridor (SGC) becomes operational. The project is a rare example of continuing economic cooperation between two neighboring nations,” Rauf Mammadov,  resident scholar at the Middle East Institute, said.

Both countries are hoping for stronger support from Washington in consolidating their regional gains and pushing for their “red lines” ahead of the upcoming inauguration of Biden on Jan. 20.

Foreign Ministry spokeswoman Maria Adebahr told a news conference in Berlin the exploratory talks will resume later this month after a four-year hiatus.

“This is a right and an important step, and also good news for the entire region,” she said and added that Germany tried hard during the past six months while it headed the EU presidency, to facilitate talks between Ankara and Athens.

Could this be a breakthrough in relations?

This is indeed a sign of optimism, as dialogue between the two neighbours could bring them closer together, however, the geopolitical differences have become too big to solve in such talks.

Two months ago, the United Arab Emirates (UAE) welcomed Greece’s head of government for an official visit yesterday. The two states signed a foreign policy and defense agreement with Turkey as its target.

“The two governments condemn Turkey’s violation of the sovereignty and sovereign rights of the Hellenic Republic and the Republic of Cyprus, as well as its overall aggressive behavior in the Middle East, the Southeastern Mediterranean and the South Caucasus, in flagrant violation of the International while recalling the obligation of all states to refrain from the threat or use of force as provided for in the Charter of the United Nations,” their joint statement stated.

In addition to this, Greece’s increasing ties with Israel have also been targeted at Turkey, as Greece aim to corner Turkey in the Mediterranean.

Greece said Tuesday it had approved a landmark $1.68 billion deal with Israel, providing for the procurement of 10 state-of-the-art jet fighters and training of pilots as the government in Athens upgrades its defenses, mainly against its longtime foe Turkey.

The deal, which both sides are set to sign in the coming weeks, marks the biggest defense agreement between Greece and Israel since Athens began shifting its pro-Arab outlook and stance in the Middle East some 20 years ago.

“The Israelis do not trust easily, especially in the field of defense,” said Costas Filis, a professor of international relations in Athens. “So, this deal is not only important for the qualitative edge it will give Greece’s new generation of pilots and armed forces as a whole, but because of the serious message it puts out – that a solid and new depth of relations has been consolidated between Athens and Jerusalem.”

Israeli Defense Minister Benny Gantz said the deal would “serve the interests of both Israel and Greece, creating hundreds of jobs in both countries … promoting stability in the Mediterranean.”

This is a clear sign that although there is optimism in the latest planned talks between Turkey and Greece, the two geopolitical rivals are still far from a definitive reconciliation.