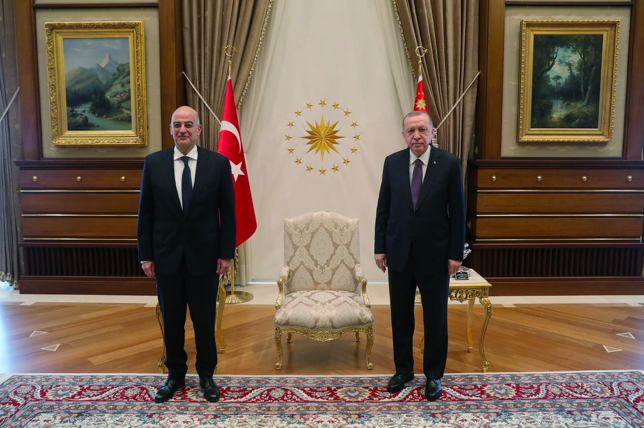 In a sign that Turkey and Greece are keen on reconciliation, foreign Minister Mevlüt Çavuşoğlu and his Greek counterpart Nikos Dendias met in the capital Ankara on Thursday as both countries seek a path toward dialogue following a tumultuous year marred by conflicts over the Eastern Mediterranean.

In an indication of the visit’s importance, Dendias also met with President Recep Tayyip Erdoğan.

The visit is the first between the two nations after tensions rose high in 2020 over maritime boundaries and energy exploration rights in the Eastern Mediterranean, leading to a military buildup that featured warships from the two countries facing off.

Yet, recently, the two NATO allies have adopted a more conciliatory tone and have been seeking dialogue.

Turkish and Greek diplomats have since met in Istanbul and Athens, resuming a series of meetings designed to build trust between the historic regional rivals. The exploratory talks came after a five-year hiatus.

The two NATO allies have been at odds over decades-old issues including the extent of air and maritime boundaries in the Aegean Sea and the future of the divided island of Cyprus. Turkey and the Turkish Cypriots ruled out discussing a federal system to reunify the island, insisting that a two-state accord is the only way forward.

“We are prepared to discuss all of our issues with Greece,” Çavuşoğlu told NTV television on Thursday. “Of course, it is not possible to resolve all of the issues in one meeting – or in multiple meetings – but at least a positive atmosphere (is being) created and we can work out the ways in which we can resolve the existing problems.”

“There are issues on which we disagree with Greece. We have to discuss these in an open and honest manner,” he added.

Turkish leaders have repeatedly stressed that Ankara is in favor of resolving outstanding problems in the region through international law, good neighborly relations, dialogue and negotiations. Instead of opting to solve problems with Ankara through dialogue, Athens has, on several occasions, refused to sit at the negotiation table and opted to rally Brussels to take a tougher stance against Turkey.

On Wednesday, Greece said it had agreed with Libya to hold talks on marking out their maritime zones in the Mediterranean, after a meeting with the president of the Libyan Presidential Council, Mohamed Menfi.

Asked about the development, Çavuşoğlu said Libya could hold talks on maritime demarcation with any country, adding this was not a risk to the accord between Ankara and Tripoli.

Çavuşoğlu, in an interview with the private broadcaster NTV before the talks, highlighted the need for the continued dialogue between the two neighbors for healthy relations. “We have always been ready to sit around the same table and discuss all our problems. We cannot perhaps resolve all the problems in just one meeting but we can create a positive environment. Our dialogue has been resumed after a long break,” Çavuşoğlu stated.

“There is no need [for the mediation] of the European Union or any other third party. We cannot resolve our problems on our own as we openly speak about all of them. It’s important for us to endure our dialogue.”

Nevertheless, tensions remain, as Devlet Bahçeli, leader of the Nationalist Movement Party (MHP) that is in a ruling coalition with Turkish President Recep Tayyip Erdoğan’s Justice and Development Party (AKP), once again spoke about supposed conspiracies against Turkey by Greece.

The INIOCHOS 2021 exercises, the largest air exercise in Europe and the wider Mediterranean region, includes the participation of Greece, France, the U.S., France, Israel, Canada, the United Arab Emirates, Cyprus and Spain.

In the context of Turkey’s illegal claims over Greek sovereign rights, Bahçeli claimed that Greece was “violating Turkish airspace” with these exercises and spoke of a conspiracy organised by Athens with other countries against Turkey.

The INIOCHOS exercise is carried out on an annual basis at the Air Tactics Center (KEAT) and the Andravida Air Base in northwestern Peloponnese.

Furthermore, Greece has lashed out at Turkey for alleging that the government in Athens is aiding and abetting what Ankara sees as Kurdish terrorists. But the accusation, contained in a newly released video, comes after reports in Greece that Turkey has granted citizenship to Islamic State militants. The fresh accusations traded by the two NATO allies may threaten ongoing negotiations to ease long-standing differences that nearly sparked a war between them last year.

It is not the first time Turkey has made such accusations against Greece.

“One country that stands out as a haven for the PKK is our neighbor and NATO ally, Greece,” says a voice in the video. The PKK is the Kurdistan Workers’ Party, which has been waging a decades-long insurgency inside southeastern Turkey and is considered a terrorist organization by Ankara.

Yet in rebuffing the claim, calling it “mythical” and “propaganda,” the foreign ministry in Athens questioned the timing of the video’s release by the chief communications adviser to Turkish President Recep Tayyip Erdogan.

There are still many flashing points that Turkey and Greece need to address in the process of reconciliation, and it will therefore take time before we can determine whether such efforts will be successful.