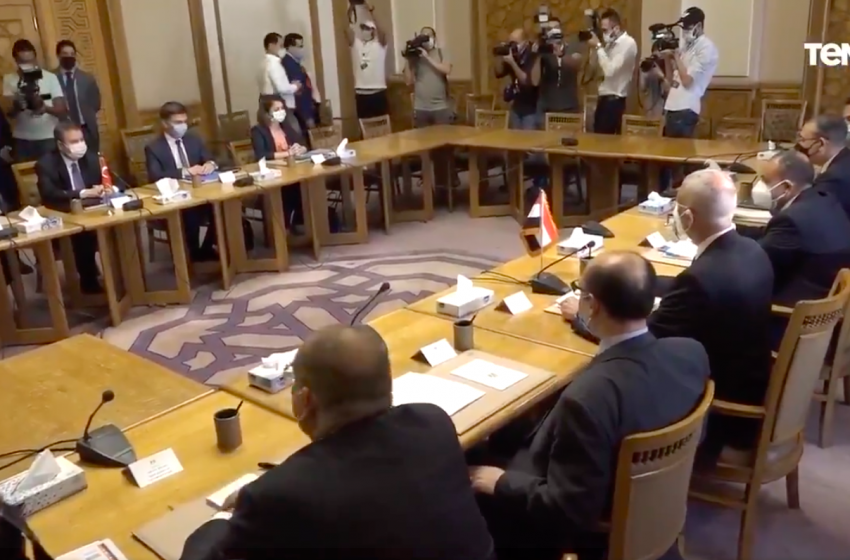 Egyptian and Turkish officials have met for talks aimed at resetting ties between the two regional powers after years of enmity.

The two-day “political consultations” on Wednesday between the two nations starting in Cairo were chaired by Hamdi Loza, Egypt’s deputy foreign minister, and his Turkish counterpart Sedat Onal. Egypt’s Foreign Ministry announced the meetings in a statement late on Tuesday.

It described the talks as “exploratory discussions” that would focus on “the necessary steps that may lead towards the normalisation of relations between the two countries, bilaterally and in the regional context”.

The statement did not elaborate.

Egypt and Turkey have been at loggerheads since the Egyptian military’s 2013 removal of the president from the Muslim Brotherhood group who enjoyed the support of Turkey. Egypt has designated the group a “terrorist” organisation.

Recently, top Turkish officials signalled a warming of ties with Egypt, a shift from their previous, sharply critical approach to the government of President Abdel Fattah el-Sisi.

Signalling the success of the talks so far, an Egyptian official said after the talks,

“Talks with the #Turkish delegation today in Cairo succeeded in breaking the barriers with Ankara.”

“A joint statement will be released after the meetings. Depending on the course, a press conference is also possible.”

“The discussions were frank and in depth. The two sides will evaluate the outcome of this round of consultations and agree on the next steps.”

Overall, this is a positive start to official negotiations, and both sides’ willingness to come to common ground will be crucial in the success of normalization.

Turkey has in recent months taken the initiative in pushing to repair ties with Egypt. Earlier this year, Turkey offered its ship to help solve Egypt’s Suez blockage. Furthermore, the Turkish Foreign Ministry, as well as Erdogan, have made several statements welcoming normalization with Egypt and reaching out to the latter.

Turkey’s foreign minister hailed the start of “a new era” with Egypt as Ankara pushes ahead with normalizing relations with Cairo, local media reported last month.

Turkey and Egypt broke off relations after the 2013 overthrow of ex-Islamist president Muhammad Mursi, who was supported by Turkish counterpart Recep Tayyip Erdogan.

That year Turkey and Egypt expelled each others’ ambassadors and froze their relations.

Turkish officials said last month Ankara had established the first diplomatic contacts with Cairo since 2013 as part of wider efforts to fix ties with other Middle Eastern rivals.

In another initiative by Turkey to pave the way for normalization, the Turkish government lifted a veto against Egypt’s partnership activities with Nato last year as part of attempts to repair ties with Cairo, two people familiar with the matter told Middle East Eye.

Turkish Foreign Minister Mevlut Cavusoglu said in televised remarks last week that Turkey had made some goodwill gestures to Egypt within Nato, without giving further details.

Turkey’s initiative has been met with an increasingly open Egyptian response, although until now it has stayed cautious, due to its strong ties with Turkey’s geopolitical rival, the UAE.

An important development that must be mentioned in relation to the recent acceleration of prospects of Turkey-Egypt normalization, is the normalization of ties between Qatar and the Gulf bloc, and consequently Egypt.

Since the signing of the Al Ula declaration in January to officially end the Qatari rift with Saudi Arabia, the United Arab Emirates (UAE), Bahrain, and Egypt, Egyptian-Qatari rapprochement has been among the fastest to develop. Within two weeks of the agreement’s signing, the Egyptian Foreign Ministry announced that Cairo and Doha had officially agreed to resume diplomatic ties, making Egypt the first country in the group to do so. By early March, the countries’ foreign ministers had met in Cairo on the margins of an Arab League meeting.

Though renewed relations will bring challenges and fundamental political differences between the two countries will remain, Egypt’s will to move forward is no surprise. The benefits of stronger Egyptian ties with Qatar—particularly economic ties—outweigh the risks. In more subtle ways, increased Egyptian-Qatari dialogue on issues like Libya and the Great Ethiopian Renaissance Dam (GERD) could also prove beneficial to both countries’ political and security interests.

Indeed, Egyptian leadership should be leaning forward to rebuild ties with Qatar and, given the possible benefits to regional stability, the Joe Biden administration should carefully encourage those efforts.

Qatar is one of Turkey’s main geopolitical partners in the Middle East, and has been trying to improve its neighbors ties with Turkey, which it views as a central pillar of stability in the region. Qatar’s normalization and strengthening of ties with Egypt, will therefore have certainly increased Egypt’s readiness to negotiate with Turkey.

Based on the developments in recent months, Turkey and Egypt are certainly on track towards normalizing ties, however the road ahead is still long, due to the significance of geopolitical and ideological differences.