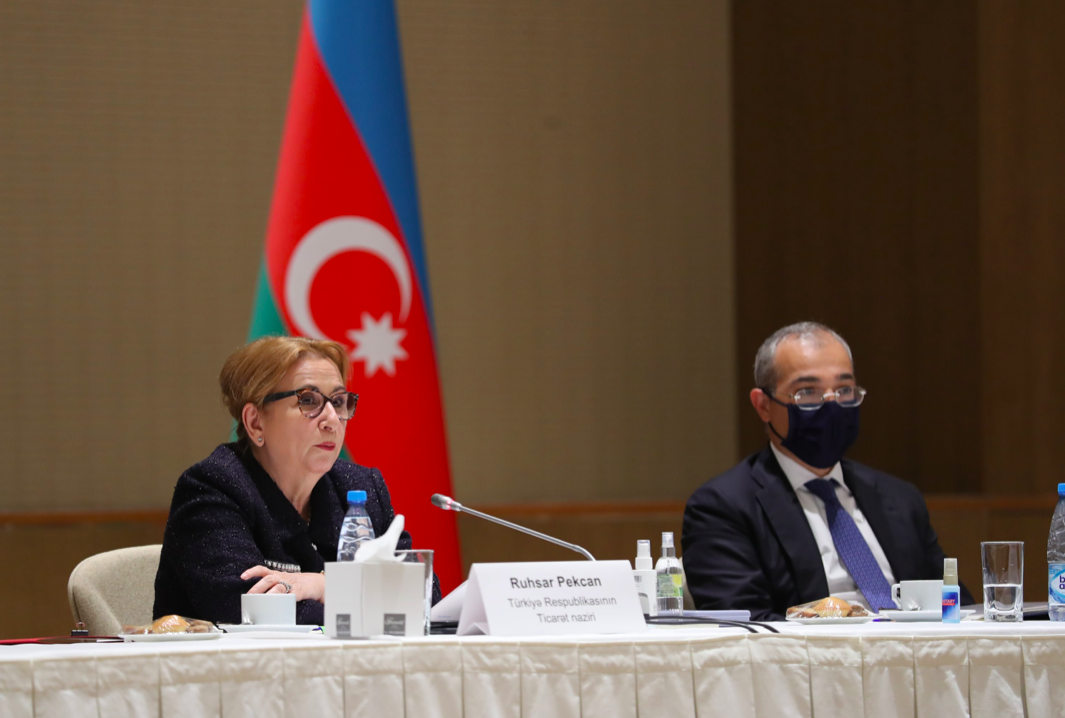 An increase in the mutual investments and commissioning of a free trade agreement (FTA) could easily pave the way for Turkey and Azerbaijan to reach as much as $15 billion (TL 121 billion) in bilateral trade volume, Turkey’s Trade Minister Ruhsar Pekcan said Friday. Pekcan’s remarks came as she and the accompanying delegation arrived in Baku to meet with Azerbaijani officials and hold talks on bilateral relations.

Pekcan, during her tie in the Azerbaijani capital, paid a visit to the grave of former President Haydar Aliyev. She also visited the Alley of Martyrs to pay tribute to those who lost their lives in a massacre of more than 130 people by the Soviet army in Baku and the surrounding areas on Jan. 20, 1990, on the eve of the country’s independence. The minister visited the Turkish martyrs’ cemetery in Baku, as well.

Referring to the preferential trade agreement signed between the parties last month, Pekcan said that the ultimate aim is to ink an FTA and that their works are continuing with regards to this.

Pekcan, who stated that the Simplified Customs memorandum of Understanding (MoU) signed between the two countries will come into effect on April 15, stressed that they will work together on the removal of transition quotas, the reduction of toll fees, the strengthening of the Baku-Tbilisi-Kars (BTK) line and the Trans-Caspian International Transport Route (ITR) Middle Corridor and to make Azerbaijan a logistic hub while also contributing to all other regional countries.

Commenting on Azerbaijan’s victory over Armenia and the retaking of occupied Nagorno-Karabakh and surrounding areas, Pekcan said Turkey, with both its state institutions and private sector, is ready to take part in the reconstruction and restructuring of the liberated areas.

In another sign of a strengthening union between the two countries, from April, passport-free travel will be possible between the two countries. Announcing the new rules on Thursday, Turkish Foreign Minister Mevlut Cavusoglu said in a tweet: “As of today, traveling with Azerbaijan is now possible only with an identity card. All obstacles are removed, our brotherhood is getting stronger.”

He used the hashtag “one nation, two states”, describing the deep-rooted ties between the two friendly countries.

With the new legislation, Turkish and Azerbaijani nationals will be able to travel without a passport using a new type of ID card installed with a chip.

A bilingual “entry-exit form” will be given to Azerbaijani citizens on their arrival to Turkey, and to Turkish citizens while departing from Turkey.

Citizens of both countries will need to show this document to the officers at border crossings along with the ID card.

However, the use of passports will still be mandatory for those entering Azerbaijan and Turkey from third countries.

If Azerbaijani citizens want to apply for residence permit after the 90-day period expires, they will have to use their passports.

The Azerbaijani and Turkish signal troops have started their joint tactical and special drills under a plan approved by Azerbaijani President Ilham Aliyev, the Defence Ministry has reported on its website.

“During the exercises, military signalmen deployed to the areas for fulfilling training and combat tasks are working out tasks for organizing a unified communications system. The tasks on organizing the interoperability of troops, deploying field command posts and other actions are fulfilled in the course of the exercises conducted with the use of modern communications and automated control systems,” the ministry said.

The ministry earlier reported that the drills will be underway between April 6-8.

In a different report, the ministry stated that under the joint annual plan of the Azerbaijani and Turkish defence ministries, servicemen from the two countries will join operational and tactical exercises on April 8.

“The exercises, to be organized in our country, will be conducted at combined-arms training grounds located in different directions of the areas of responsibility of the Army Corps of the Azerbaijan Army,” the report added.

It said that the exercises are aimed at improving interoperability and increasing the combat effectiveness of the operational units of the Azerbaijani and Turkish armies, and developing the military decision-making skills among operational units’ commanders, as well as their ability to show initiative and control military units. The exercises will last until April 9.

It should be noted that servicemen from the Separate Combined Troops Army in Nakhchivan took part in the Winter Exercise 2021 along with the Turkish Armed Forces from February 2 to 12 in Turkey’s Kars.

Turkish and Azerbaijani armies regularly hold joint drills in line with the bilateral agreement on military cooperation and the participation of the two countries’ land and air forces. In August 2020, President Ilham Aliyev announced that the intensity of the Azerbaijani-Turkish drills would be increased.

Hence, it is clear that Azerbaijan and Turkey are attempting to form a union over all sectors, and it is progressing fast, even possibly surpassing the Union between EU nation states.