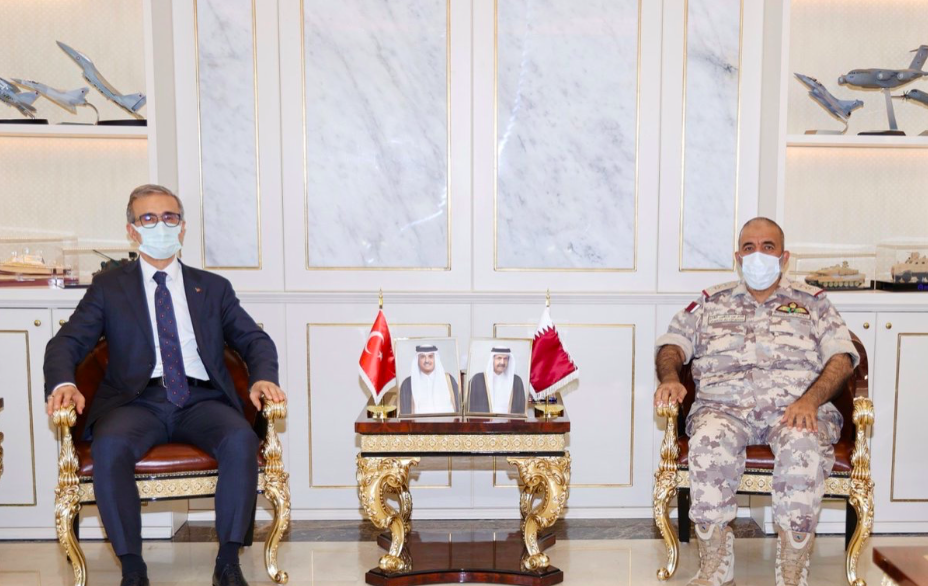 Qatar’s Chief of Staff Ghanem Bin Shaheen Al Ghanem yesterday met with the president of Defense Industries of the Turkish Republic in the Qatari capital of Doha to discuss mutual cooperation.

The Qatari Defence Ministry said that the meeting discussed issues of common interest between the two countries, as well as prospects for cooperation between the armed forces and the institution, and ways to enhance them.

In March, the Qatari Defence Ministry said it had signed several bilateral agreements with Turkey as part of an “existing strategic cooperation deal between the two countries.”

Last year, Qatar received the so-called ‘Doha’ warship from Turkey, which was manufactured by the local ShipYard. The move was part of a military agreement between the two countries, which also included the establishment of the first-ever Qatari-Turkish joint forces headquarters in December 2019.

Qatar and Turkey’s military cooperation has been very strong in recent years and highlights the military and geopolitical importance of the bloc in the region.

Qatar and Turkey are increasingly looking to cooperate on the Afghanistan mediation process and fill the void left by the US, a move that could mark an important addition to the increasing foreign policy alignment between the two countries.

Turkey, Qatar, and the United Nations will “resolutely continue their earnest efforts” to achieve peace in Afghanistan, the Turkish Foreign Ministry said on Wednesday.

The trio had planned to co-convene a high-level conference in Istanbul, from April 24 to May 4, with the participation of the Afghan government and Taliban.

The ministry said in a joint statement that the conference was agreed to postpone to a later date when “conditions for making meaningful progress would be more favorable.”

The decision was taken after extensive consultations with the parties “in view of recent developments,” the statement added, without revealing further detail.

The previous day Turkish Foreign Minister Mevlut Cavusoglu announced that the conference was postponed to after the Muslim holy month of Ramadan, which ends in mid-May. Enditem.

The trade volume between Turkey and Qatar in the next period will exceed the $5 billion target, the head of the Independent Industrialists and Businessmen’s Association (MUSIAD) said Monday.

In a statement, Abdurrahman Kaan said Qatari businesspeople and Turkish companies operating in the region are very happy with the market between the two countries.

Meeting with businesspeople in Qatar, Kaan underlined that the investment trend from the Middle East and North Africa (MENA) and Gulf regions towards Turkey will continue.

Noting that Turkey is an attractive market for businesspeople in the region, Kaan said: “Considered as an intercontinental logistics center, Anatolia will become one of the most important centers of trade in the future.”