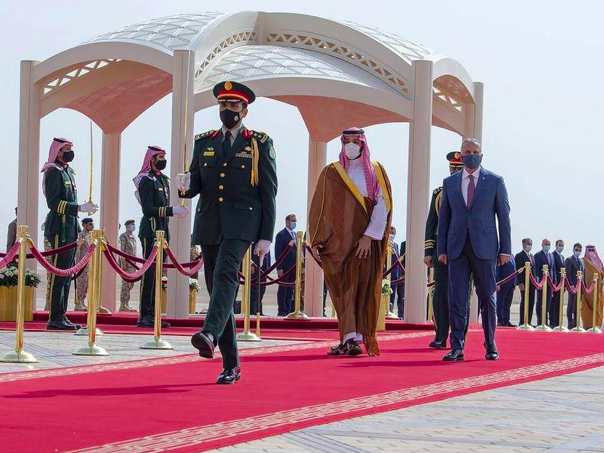 A first round of direct talks between regional rivals Saudi Arabia and Iran signals a possible de-escalation following years of animosity that often spilled into neighbouring countries and at least one still-raging war.

The talks, hosted by Iraq earlier this month, were confirmed on Tuesday to the Associated Press by an Iraqi and a foreign official in Baghdad.

Saudi Arabia is recalibrating its regional position after losing an unflinching supporter in US President Joe Biden’s predecessor Donald Trump.

Iran, meanwhile, has calculated that a gradual detente with Saudi Arabia, a long-time US ally, will work in its favour during renewed nuclear talks with world powers.

Saudi Arabia has sought talks with Iran as the kingdom tries to end its years-long war in Yemen against Iran-backed Houthi rebels.

In recent months, the Houthis have increasingly launched missiles and bomb-laden drones at the kingdom, targeting crucial sites and oil infrastructure.

Ending that war could be a bargaining chip for the Iranians as they seek sanctions relief from from nuclear talks in Vienna.

The hosting of Saudi-Iran talks is also a significant step for Iraq, which has ties with both the US and Iran and has often borne the brunt of Saudi-Iran rivalry.

A senior Iraqi official said recent trips by Prime Minister Mustafa al-Kadhimi to Riyadh and the United Arab Emirates have been key in bringing Iranian and Saudi interlocutors to the table.

Details of the initial meeting, first reported by the Financial Times, have been sparse.

The thorny subject of the Yemen war figured prominently, the Iraqi official said.

It was not clear how much progress, if any, was made in the talks but a diplomat suggested there will be more meetings.

The pro-Iran Lebanese newspaper al-Akhbar said a new round of talks would be held in Baghdad next week following a “very positive” first meeting.

Saudi Arabia’s reconciliation tone towards Iran may very well be aimed at pleasing the Biden administration through policy alignment, in light of the latter’s initial hostile stance towards Saudi Arabia, but then relaxation of such stances.

In the latest sign of hostility, the House on Wednesday voted overwhelmingly to restrict arms sales to Saudi Arabia over its killing of the U.S.-based dissident and journalist Jamal Khashoggi.

The bill, H.R. 1392, would bar sales, authorizations and transfer of arms and other defense services from the president to Saudi Arabia. President Joe Biden, however, could continue sales if he can certify the country is not engaged in killing, torturing or endangering the lives of dissidents and detaining U.S. and international citizens.

“Jamal Khashoggi’s brutal murder and dismemberment will not be forgotten, and it will not go unaddressed,” Connolly tweeted. “The House of Representatives has spoken clearly: Saudi Arabia must be held to account.”

In February, the Biden administration released a long-secret intelligence report concluding that Crown Prince Mohammed bin Salman approved the killing of Khashoggi in 2018.

The legislation comes after Biden received pushback from progressives over his foreign policy balancing act. Many progressives are still upset that the president did not impose sanctions on bin Salman, after he decided that the crown prince was too valuable an ally in a region where the bigger threat to U.S. interests is Iran.

When it comes to Saudi leadership, Crown Prince Mohammed bin Salman’s three most important decisions have all been challenged in one way or another. The Qatar blockade did not bring any tangible results and was eventually revoked. The intervention in Yemen has been counterproductive on many grounds and will become increasingly unsustainable in light of a change of direction in Washington. Lastly, the economic transition planned in Vision 2030 has no end in sight, while the COVID-19 crisis has further slowed down progress. Reconciliation with Iran may be a possible way out of this foreign policy crisis faced by the Kingdom.

Nevertheless, concerns remain. Saudi Arabia said on Wednesday it was concerned about Iran’s intention to start enriching uranium to 60% purity and said such a move could not be considered part of a peaceful nuclear programme.

A foreign ministry statement called on Iran to avoid escalation and engage seriously in talks with global powers about a 2015 nuclear pact. The statement also urged the international community to reach an agreement “with stronger parameters of a longer duration”.

Iran’s announcement about its plan to enrich to 60%, bringing the fissile material closer to the 90% level suitable for a nuclear bomb, came after Tehran accused Israel of sabotaging a key nuclear installation and ahead of the resumption of nuclear talks in Vienna.

Saudi Arabia and its Gulf allies, who are also worried about Iran’s ballistic missiles and regional network of proxies, had supported former U.S. President Donald Trump’s move to quit the accord in 2018 and re-impose harsh sanctions on Iran.

The Saudi foreign ministry statement on state media said any deal should “also take into consideration the deep concern of regional states over escalatory steps by Iran to destabilise regional security and stability, including its nuclear programme”.

Saudi Arabia and Iran have been locked in several proxy wars in the region, including in Yemen where the Iran-aligned Houthi movement has launched cross-border missile and drone attacks at the kingdom.

However, this statement of concern is not the strong reaction expected from Saudi Arabia, rather, it appears a continuation of Biden’s policy of a balanced approach towards Iran.