Is Turkey about to launch another military operation in Syria?

Why are Iran and Azerbaijan on the brink of war?

Is Libya’s Haftar preparing for elections in December?

Is the UAE turning towards Europe as it pulls away from the US? 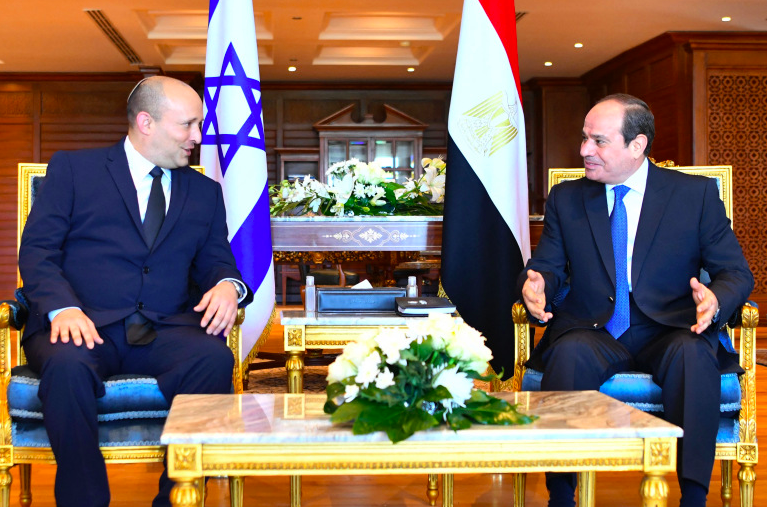 Israeli Prime Minister Naftali Bennett has met Egyptian President Abdel Fattah el-Sisi for talks on the Israeli-Palestinian conflict and bilateral ties in the first official trip by an Israeli leader to Egypt in a decade.

Bennett, the head of the far-right Yamina party who took office in June, met the Egyptian president on Monday in the Red Sea resort of Sharm el-Sheikh on the southern tip of the Sinai peninsula.

In the discussions, el-Sisi cited Egypt’s efforts to maintain calm in the occupied Palestinian territories and the importance of international support for rebuilding efforts there, according to an Egyptian presidency statement.

Bennett told Sisi that Egypt has to strengthen inspections at the border crossing between Egypt and Gaza in order to prevent the smuggling of dual-use materials that can allow Hamas to rebuild its military capabilities, an Israeli official said.

El-Sisi also “affirmed Egypt’s support for all efforts to achieve comprehensive peace in the Middle East, according to the two-state solution”, the statement said.

Bennett said the talks covered diplomacy, security and the economy. “We created a foundation for a deep connection going forward,” he said before flying home.

This was an effort by Sisi to establish good relations with the new Israeli government, and the Egyptians made every effort to give Bennett an unusually warm and public welcome.

In an unusual gesture, Bennett was welcomed on the tarmac by the Egyptian foreign minister and the Egyptian director of intelligence.

Sisi and Bennett met one-on-one for three hours, followed by an expanded meeting with their aides.

When Bennett and his advisers arrived at the presidential compound for the meeting, they were surprised to see the Israeli flag next to the Egyptian flag. When former Israeli Prime Minister Benjamin Netanyahu met publicly with Sisi and his predecessor, Hosni Mubarak, the meetings were held at the UN in New York and there was no Israeli flag in the room. This symbolic change signifies the intent of Egypt to deepen ties with Israel and bring ties to a more surface level.

In a significant sign of the further development of Egyptian-Israeli ties, EgyptAir, the national airline of Egypt, is slated to operate direct flights between Cairo and Tel Aviv from early next month, The Times of Israel has learned.

Once flights start after the Sukkot holiday, there are expected to be four direct commercial flights a week between Ben Gurion International Airport and Cairo.

Currently, the only flights between Israel and Cairo are operated by Air Sinai, a subsidiary of EgyptAir, which operates the flights in unmarked planes without the Egyptian flag. The Air Sinai flights between Tel Aviv and Cairo have operated continuously since the 1980s in order to fulfill the terms of the 1979 peace deal between Israel and Egypt, but were kept discreet amid lingering hostilities between the nations.

Once flights are relaunched by EgyptAir, they will be operated by the airline’s fully marked aircraft.

Also on Monday, Israel lifted the travel restrictions on citizens visiting the Sinai Peninsula just days ahead of Sukkot, a popular period for the travel destination.

Last month, Israel scaled back its security travel advisory for the Sinai for the first time in years. The decision was made after Egyptian intelligence head Abbas Kamel visited Israel for high-level talks on Gaza.

For the past several years, the entire Sinai Peninsula has had the highest possible travel warning, Level 1, a “very high concrete threat,” due to the presence of Islamic State and other terror groups in the area. The National Security Council, however, recently changed its warning for the southern Sinai Peninsula to Level 3, a “basic concrete threat,” under which Israelis are still “recommended to not visit,” but are no longer instructed to leave.

Israel officials speculate that by inviting Bennett publicly so early in his term, Sisi’s government is trying to signal to the Biden administration Egypt’s importance in the region.

Egypt is in the midst of diplomatic efforts to try to stabilize the situation in Gaza and prevent a new escalation. The Egyptians are pressing Hamas to refrain from attacks on Israel and for Israel to take further steps to improve the situation in Gaza. However, Bennett appears to be pressuring Egypt to take a more decisive stance against Hamas, and limit the latter’s activities, a move that Egypt could be willing to accept.

Signifying this willingness. Egypt gave Hamas a message from Israel on Monday saying that continued rockets will result in a “violent response” that may result in military operation in the Gaza Strip, Lebanese newspaper, al-Ahbar, reported.

Rockets have been shot into Israel from Gaza for three nights in a row, followed by Israeli strikes at Hamas targets.
Meanwhile, Egypt’s negotiations with Israel are another sign of an increasingly independent Israeli foreign and domestic policy, independent of the US of course, under the leadership of the Bennett government. The US and Israel have diverged on several issues, and the UAE as well as Egypt have opted for strengthening ties with Israel as the US shifts away.Asked for his thoughts on the Biden administration’s support for a two-state solution to the Israeli-Palestinian conflict, Israel’s Ambassador to the UN Gilad Erdan says Jerusalem respects the position, but thinks differently on the matter.

“The current Israeli government thinks differently and believes that it’s not currently achievable,” Erdan tells The Times of Israel on the sidelines of an event marking the one-year anniversary of the Abraham Accords. “Even the Biden administration, when they speak with us, they recognize that it’s not something that currently can be achieved.”

Erdan says that, in the meantime, both Israel and the US are focusing on advancing economic projects that can improve the quality of life for Palestinians.

“The [two-state] option is not on the table, so we’re focused on what unites us rather than what divides us,” the ambassador says.

Although Egypt officially supports the 2 state solution, its actions increasingly show that it is willing to shift its stance towards Israel, and sacrifice its stated commitment to the former.

Is Turkey about to launch another military operation...

Why are Iran and Azerbaijan on the brink...

Is Libya’s Haftar preparing for elections in December?

Is Turkey about to launch another military operation...