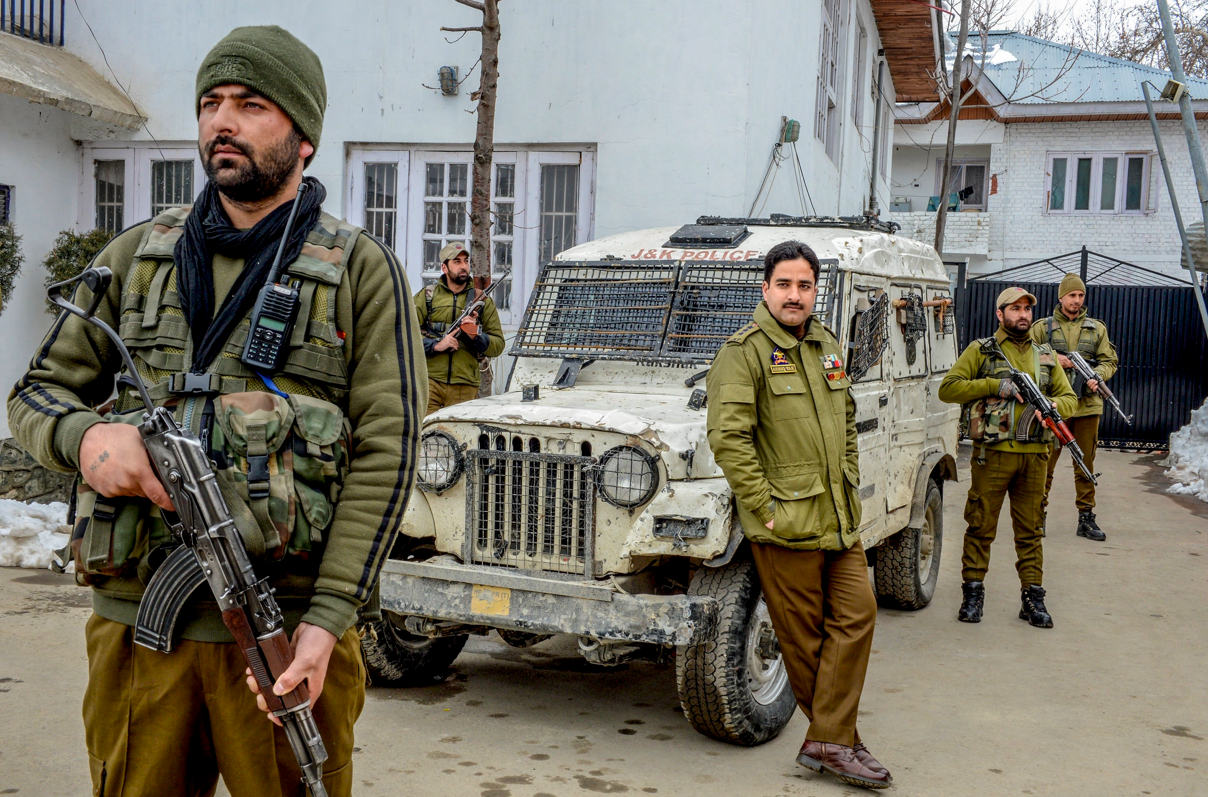 Rebel fighters in Indian-controlled Kashmir have killed two soldiers in an attack in the disputed region’s main city, the Indian army said.

Colonel Rajesh Kalia, an Indian army spokesman, said fighters sprayed bullets at an army patrol on the outskirts of Srinagar city on Thursday. Two soldiers were critically injured and later died at a hospital, he said. Police and soldiers launched a search operation for the attackers.

The attack comes during near-daily fighting between Pakistani and Indian soldiers along the highly militarised frontier that divides Kashmir between the two nuclear-armed rivals. The Indian army said Pakistani soldiers targeted Indian positions with mortars along the de facto border in southern Poonch district on Thursday. Indian soldiers retaliated, the army said in a statement. It did not report any casualties.

On November 13th India said that four civilians and five members of the security forces had been killed, and 19 injured, in “unprovoked” Pakistani firing across several parts of the loc. Pakistan in turn said that five of its civilians and one soldier were killed in an “unprovoked and indiscriminate” Indian attack. Both sides said they had given the other a “befitting reply”. It followed an earlier flare-up in April, when drone footage released by India’s army showed alleged Pakistani ammunition dumps and artillery positions erupting like volcanoes, throwing flaming debris into the cool Himalayan sky.

In another setback for the long-suffering people of India-administered Kashmir, the Organisation of Islamic Cooperation (OIC) meeting of foreign ministers has refused to have time set aside to discuss their plight.

A statement released by the OIC made no mention of Kashmir and there will be no special session to discuss India’s draconian military measures that have resulted in a lockdown of the region lasting over a year.

The OIC host, Niger, turned down a request by Pakistan to discuss the Kashmiri issue. This follows a decision earlier this year in which Saudi Arabia also refused Pakistan’s request to have Kashmir on the agenda of foreign ministers.

In August of 2019, India’s Hindu nationalist Prime Minister, Narendra Modi, stripped the region of its long-held autonomous status. For many in the Muslim-majority region, the move sparked fears that New Delhi was attempting to change the demographics by encouraging Hindu migration.

Despite this, a report released by the Research Section of Kashmir Media Service said the OIC has passed a number of resolutions condemning Indian atrocities against the Kashmiris and is committed to finding a peaceful settlement to the Kashmir dispute as per the relevant UN resolutions. The report said the OIC is consistently issuing statements supportive of the UN resolutions on Kashmir much to India’s dismay. It said Pakistan has always played leading role to convene meetings of OIC Contact Group on Jammu and Kashmir, adding that the OIC should redouble its efforts to help struggling Kashmiris attain freedom from Indian bondage.

The report said, India is widely under criticism by the world human rights organizations for its crimes against humanity in Indian illegally occupied Jammu and Kashmir. Today it is isolated for having disputes with all its neighbouring countries, it added. It said India is labelling the Kashmiris’ struggle for securing their right to self-determination as terrorism to confuse the world community but Kashmir movement is a legitimate struggle for realization of Kashmiris’ rights. It said India’s ugly face has been exposed to the world and linking IIOJK people’s struggle with terrorism is violation of international law.

Preparations are on in full swing for the first elections in Jammu and Kashmir post abrogation of Article 370 and reorganisation of the erstwhile state with political parties making the last last-ditch efforts to woo voters.

The first-ever district development council (DDC) elections will be held in eight phases to elect 280 members in 20 districts from November 28 to December 22. In the absence of an elected government in the union territory, these councils are set to become a new unit of governance in the region.

Along with the DDC polls, eight-phased polling will be held for by-elections to 230 urban local bodies (ULB) and 12000 panchayat seats. Major regional parties National Conference (NC) and Peoples Democratic Party (PDP), which boycotted the panchayat polls in 2018, have plunged into the electoral battleground under the banner of the People’s Alliance for Gupkar Declaration (PAGD).

The BJP and the Congress are also campaigning in various constituencies of Jammu and Kashmir. While the BJP has deployed union ministers and central leaders as its star campaigners, only local Congress leaders are campaigning.
The state election commission (SEC) and chief electoral officer (CEO) have issued all notifications for the elections to the DDCs, panchayats and ULBs.

The BJP has made the issue of alleged land encroachments by former chief ministers Farooq Abdullah and Omar Abdullah and other leaders of the Gupkar alliance a major poll plank while reaching out to certain communities including Muslims and Gujjars. The BJP has planned digital rallies and door-to-door campaigning as well as social media campaigns by employing around 800 IT people in most of the districts, a party leader said.